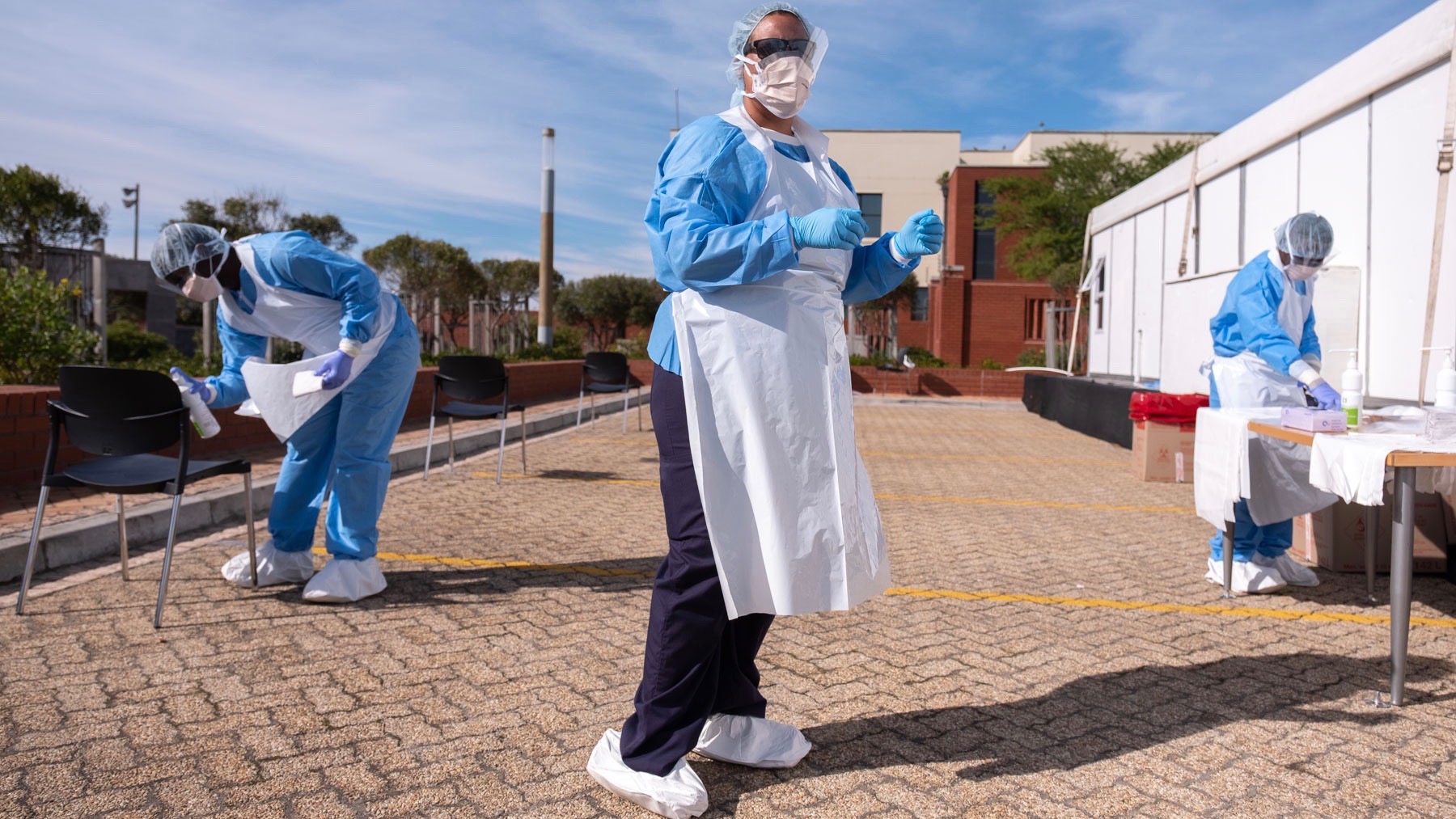 From left: Luyanda Mto, Dr Celeste Jonker, and Buhle Nkomonda at the pop-up testing centre outside Khayelitsha District Hospital. The centre was set up to help swab more than 270 employees of three shopping centres who had close contact with employees who tested positive. Photo: Barry Christianson / New Frame

South Africa’s second largest trade union federation, the South African Federation of Trade Unions (SAFTU), said on Sunday May 24 that it is consulting with the leaders of its various affiliated unions and members with the intention to file an urgent Section 77 notice, to engage in a strike against the unfolding calamity.

SAFTU released a statement soon after President Cyril Ramaphosa’s address to the nation, in which he announced that the lockdown’s stringency will be downgraded from the current Level 4 to Level 2, with minor exceptions.

Under level 2, construction, mining, manufacturing and retail will operate at full capacity. Domestic work, cleaning services, informal waste picking will be permitted. All government services will resume and full domestic air travel and car rental services will be restored.

By the president’s own reckoning, “the risk of a massive increase in infections is now greater than it has been since the start of the outbreak in our country.” Nevertheless, he insisted, “Now it is time for most of us to return to work and to resume parts of our lives that have been on hold since the lockdown began.”

The 800,000 members-strong left-wing federation alleges that the decision was made at the behest of business associations, which have been lobbying for this downgrade over the last week.

“The employers ha(d) been relentlessly calling on the government to step down from level 4 to level 3 immediately. Once they sensed that the government intends to comply, they changed the goal posts, and Business 4 South Africa (B4SA) demanded that we be moved to level 2,” SAFTU said.

“Urging that the economy prepare for an orderly, clear and swift transition.. to Level 2,” B4SA had said on May 17, “We are continuing to engage the government to reiterate our call for the swift easing of economic restrictions accompanied by stringent health and hygiene measures.”

While the business associations have stressed on health and safety protocols under level 2 lockdown, the unions are not convinced that workers’ safety will be taken care off.

Even when the lockdown was at level 5 and subsequently Level 4, sufficient safety measures were not taken at the factories and mines which were permitted to operate at limited capacity.

“The bosses have been violating government regulations. They have not told workers of the regulations, not ensured that everyone is screened, not supplied Personal Protective Equipment and appointed specific personnel to ensure the workplace is ready and compliant with the directives,” SAFTU maintains.

As a result, they conclude, “the epidemic has moved from being a major concern in the leafy suburbs to the working-class communities.”

Adding to concerns over public health and safety is the economic distress, with thousands retrenched “as the bosses used the lockdown to ‘restructure’ and use even fewer workers to assure more short-term profits.”

The “miserly, token grant” of R350, announced by the government as a support for those left with no alternative income, was actually granted only to a tenth of the four million people who had applied for it.

Now, with the government and the businesses deciding to put them back to work, even without making public transport available, the “workers will again feel like sardines, cramped in the trains and taxis, come the 1st June, infecting each other on their way to make the employers richer.”

SAFTU declared that while the capitalist class has demonstrated “its greed and haste” and the president yet again reveals “his biases,” they called for a revival of militancy and reinforced the “need to prepare for a serious class war, one that has again been declared ‘on,’ again from above.”

“We will be going back to the streets in even greater numbers, as are demonstrators across the world using social-distancing tactics, to protest against the slaughter of our jobs.”