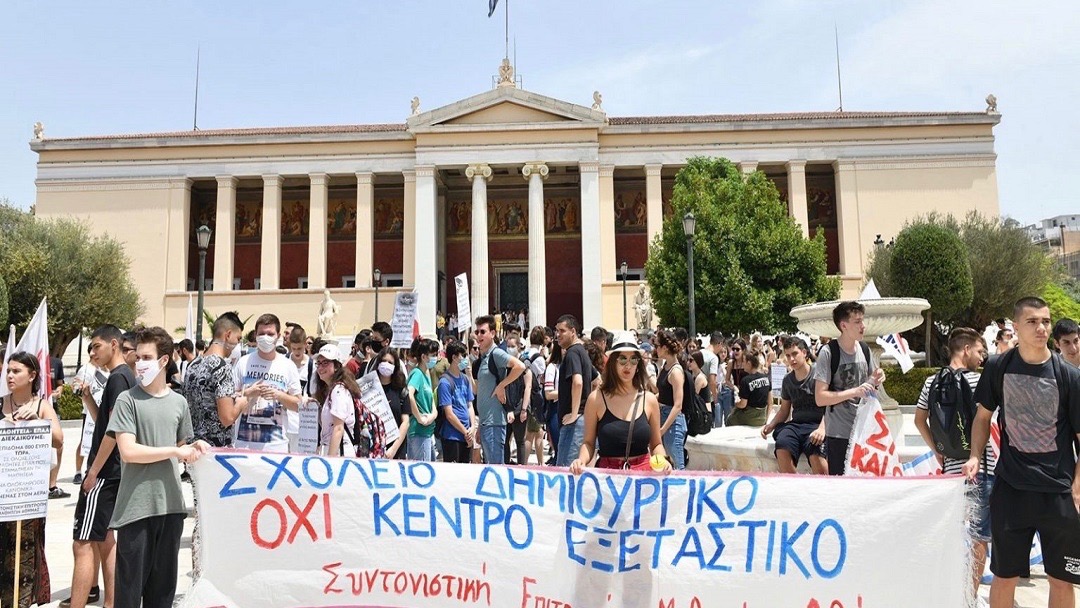 Greek teachers and students mobilization against the proposed education bill on May 19. (Photo: 902.gr)

Greek teachers associations have announced demonstrations and strikes planned on June 9 against a new bill on education presented by the New Democracy (ND)-led government during the COVID-19 lockdown period, while demonstrations were prohibited. Critics note that several features of the proposed bill, that deals with education at all levels, are against the interests of students, teachers and parents, and will diminish the education system in the country as a whole. The All Workers Militant Front (PAME) joined teachers across Greece in protests against the new bill, which has also been opposed by students and parents.

Meanwhile, classes have started in schools and universities in Greece despite concerns regarding inadequacy of protection measures installed by the government for students and teachers. Workers, educators and teachers across the country have been on the streets almost daily, protesting the government’s anti-worker measures and the serious shortages in the health system.

Regarding the new bill on education, teachers associations have criticized the government on several issues. As per experts, the bill proposes to:

1. Increase the number of exams at the secondary education level, eliminate general education and make schools more competitive by focusing even more on exams for access to higher education.

2. Implement English at the kindergarten level (at an age when children have not yet started developing their mother tongue) and “skill workshops“ in all classes (among them, entrepreneurship classes), intensifying the fragmentation of education.

3. Introduce an evaluation system to make schools more class-oriented with categorizations for schools, pupils, and teachers.

4. Force young teachers to work far from their families under harsh conditions and with low wages. If they deny the positions offered to them, they are to be excluded from the system for two years.

5. Intensify privatization of university departments and complicate the transfer process.

6. Provide for mandatory transfer of pupils and teachers, and firing of substitute teachers. OECD  targets regarding increasing the average number of pupils per class are also to be sped up.

7. Reinforce, once again, authoritarian education methods with penalties and notes of conduct as well as multi-day expulsions to ensure student discipline.

Educators have also opposed the additional measures proposed by the government for the operation of cameras inside classrooms.