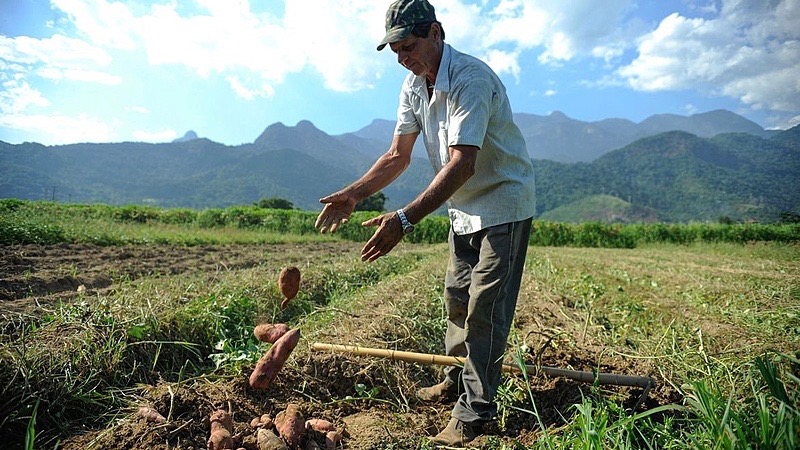 Even with the lack of support for family farming, the MST has already donated 1.2 tons of produce in the outskirts of the country - Tomaz Silva/ Agência Brasil

In Brazil, the pandemic has affected the economy, politics, nature and has had more severe effects on the lives of the poorest workers. There is no clear optimistic scenario for the future, especially considering the federal government’s stance in relation to the thousands of deaths and the deepening social crisis in the country.

For the Landless Rural Workers’ Movement (MST by its Brazilian Portuguese acronym), the mobilization and organization of the people, which seeks to join forces to build a new national project, points to only one way forward: the construction of the Popular Agrarian Reform.

This Friday (5), the movement is launching a plan with Emergency Measures for the construction of Agrarian Reform, that brings together proposals for the democratization of access to land, distribution of wealth, as well as the defense of the rights of people living in rural areas and in the forests.

Kelly Maffort, from the national leadership of the movement, explains that the implementation of the plan is fundamental to enable workers, who are living in extreme poverty and with the dramatic situation of hunger, to live with dignity.

“It is fundamental to tackle the problems of the crisis and the problems of hunger. For the MST, one of the ways to ensure that people have access to work, income, housing, and food is through Agrarian Reform,” Maffort states.

The official launch of the plan was this Friday, with the moderation of leaders and the participation of artists, scientists and elected politicians.

The settlement of families who suffer from unemployment and are now living in camps on the outskirts of cities, is one of the central points of the proposal. The MST calls for the expropriation of unproductive properties, especially in areas that are close to large urban centers.

“We conducted a survey among 729 companies that are in debt with the Union. We currently have a debt of at least R$200 billions in tax evasion. If these companies paid with land to the Brazilian government, restoring the public safes, just with this measure we would have the possibility of collecting six million acres of land,” explains Maffort, who also sees the distribution of vacant lands in the states as an alternative.

According to the data released by the Office of the Attorney General of the National Treasury (PGFN by its Brazilian Portuguese acronym) last year, large debtors, owing over R$ 15 million, are responsible for 62% of the active debt of the Federal Government and of the Service Guarantee Fund (FGTS), which reach amount to the total value of R$ 1.368 trillion.

MST’s leadership explains that the mobilization of ruralists and the Federal Government for the bill (PL) 2633 is proof that there is more than enough land available, what is lacking is “political will”. The bill is based on the Provisional Measure 910, the so-called “MP da Grilagem,” and aims at distributing 65 million acres of public land to farmers and deforesters, mainly in the states of the Legal Amazon.

“Brazil does not suffer from a land shortage problem to carry out agrarian reform. We have a huge amount of public land that could be collected immediately and assigned to those who are in a situation of social vulnerability,” analyzes Maffort.

Another central point presented in the plan’s Land and Work point is the suspension of evictions and repossessions, which became more frequent after the coup against Dilma Rousseff (PT) in 2016, and the consequent election of Jair Bolsonaro (No Party) – an outspoken defender of violence against landless peasants.

In Paraná, 10,000 families live in 70 MST camps, and about 25 of them are facing the risk of eviction. Despite this complicated scenario, it is in this state that the Movement has been carrying out some of the most significant actions in the distribution of foods to the vulnerable population. Since the beginning of the pandemic, more than 155 thousand tons of agro-ecological produce have been donated from the fields and gardens of over 90 settlements and camps.

Adair Gonçalves has lived for 10 years in the Resistência Camponesa camp, in Cascavel, and they are just getting ready to participate in the third food donation in the western part of the state. The first action took place on April 10 and 17 and helped entities and three indigenous communities in the city of Guaíra.

The imminence of eviction, for the peasant who started the struggle with the movement in 1991, when he was only 11 years old, “is the greatest difficulty and anguish for families.”

“Those of us at the camp received the notice of repossession on December 15th. We were getting ready for the holidays, to host family members. Then we had to face this harsh reality. This is an old camp, from 1999. Families live here, dwell here, everything these families have is here. Now imagine having to leave a place, where you have already built a relationship with,”says Gonçalves, recalling that just last year, in the first year of Ratinho Júnior’s (PSD) administration, 500 families were evicted from their land in the state.

The farmer reports that, during the pandemic, the 52 families in the camp have been working in an area of ​​10,000 square meters to implement an agroforest. It is named Antônio Tavares – a rural worker murdered on May 2 in the municipality of Campo Largo.

For Golçalves, it is necessary that people in the cities realize the importance of family farming and the paradox of a country as rich as Brazil being unable to meet the needs of its population.

Agrarian Reform must be agroecological

For the MST, the pandemic also highlights the need to consume healthy, agro-ecological foods that are produced close to the consumer market.

Kelly explains that from the solidarity initiatives developed by the MST in the urban peripheries, it was possible to identify the importance of people taking care of their immunity.

“When we talk about this issue of food production, we have a problem of food standardization that has been imposed by this system. So many people who live in the city, and here in Brazil we are talking about 85% of the population who live in urban centers, they are increasingly eating something that cannot be considered real food, an ultra-processed food,” the landless leader comments.

“This ends up favoring the entire group of companies behind this. Wherever we have been in solidarity actions, we realize how much the peripheries are placed in a situation of food deserts,” she points out.

Nationally, the MST’s solidarity work, which has already distributed more than 1,200 tons of food to low-income families across the country, is concentrated on two initiatives: in the “We’ll Need Everybody” campaign, which brings together, through an online platform, ongoing actions by more than one hundred entities that make up the People’s Brazil Front and People Without Fear Front; and the “Periferia Viva” campaign, focused on the fight for public policies and on the groundwork built in the territories.

Allocating resources to those who actually feed the cities, family farmers, is a way of guaranteeing the food sovereignty of the population and that are part of the proposal. The dismantling of the Food Acquisition Program (PAA by its Brazilian Portuguese acronym) and the non-compliance with the National School Feeding Program (Pnae by its Brazilian Portuguese acronym) during the pandemic are denounced by the movement in its strategy for the construction of a Popular Agrarian Reform, which also advocates the use of public banks’ credit lines to finance agro-industries and co-ops.

According to Maffort, Agrarian Reform settlements and productive camps have the capacity to continue feeding urban centers, but for that to happen, public policies that support this production are needed.

“For us to be able to have solidarity actions, for us to take the products from the fields to the city, we need to have public policies,” explains the leader, who also stresses that to guarantee the food production, it is necessary to create decent conditions for the continuity of the farmer in the rural environment – such as the strengthening of Fundeb (Fund for Maintenance and Development of Basic Education and Valorization of Education Professionals), the expansion of Pronera (The Agrarian Reform National Education Program), and the expansion and strengthening of SUS (National Healthcare service).

Watching over Nature and its Peoples

The last point presented in the plan is the preservation of the environment, and above all, of the peoples of the forest. For the movement, demarcating quilombola areas, indigenous territories and the rights of riverside and native communities are essential measures to safeguard and protect water sources and biodiversity in each biome.

“We will only have a process of natural assets preservation, if we defend the people. Wherever agro-business and mining are, there are more conflicts over land struggles. Both Bolsonaro and Salles know that in order to pass their bills, it is necessary to run over these people,” comments Maffort on the statement of Minister Ricardo Salles, at the ministerial meeting on April 22.

Also presented in the plan is the interruption of the use of pesticides and the promotion of agroforests as ways to guarantee the diversity and abundance of food. For Maffort, the lack of water in cities in the midst of the toughest phase of the covid-19 pandemic, as well as the drought affecting the South of the country are evident expressions of the model of exploitation centered on agro-business and mining.

“We are radical in the defense of agroecology and agroforestry, as a way of producing and eating in abundance, but at the same time preserving natural resources. All the people who live in the city depend on this preservation,” she concludes. 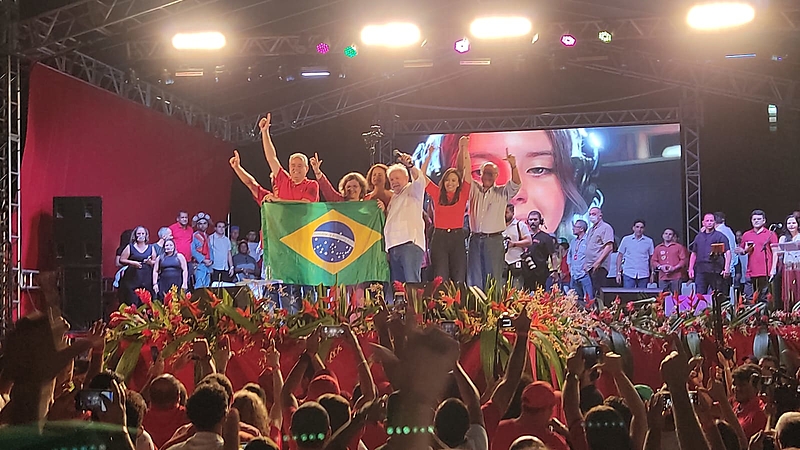 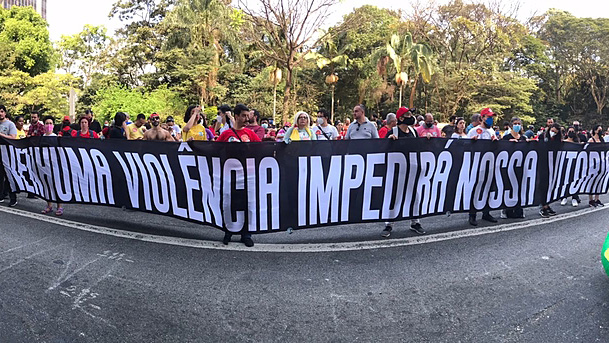