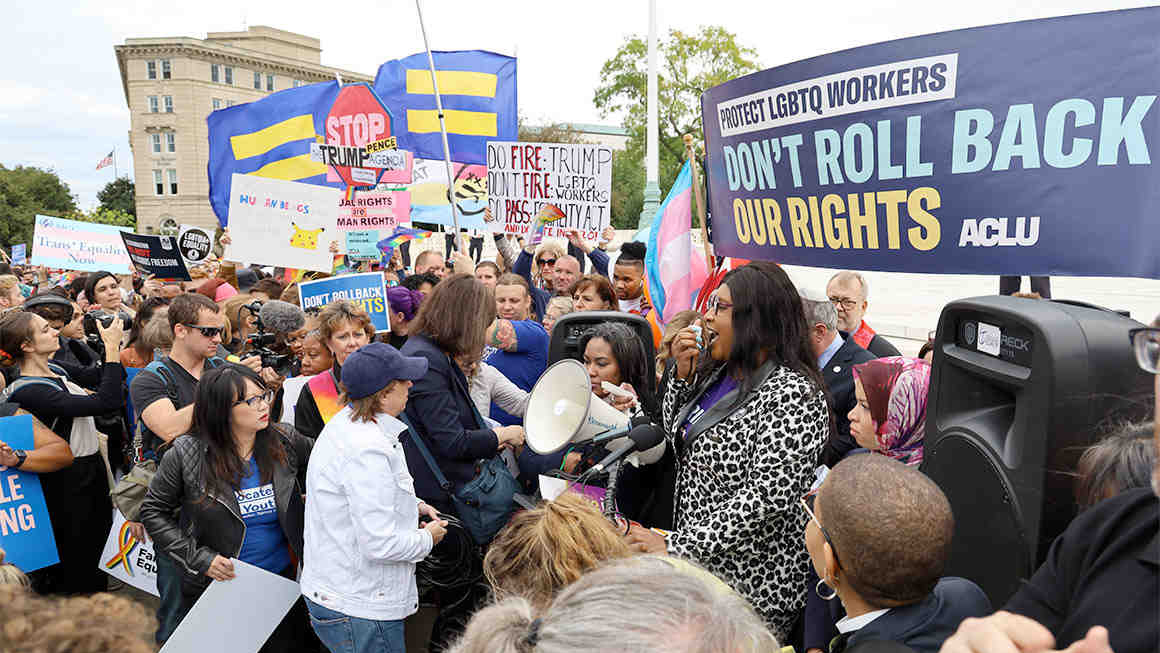 A trans rights rally held outside the US Supreme Court in Washington DC, on October 8, 2019. (Photo: ACLU)

In a major victory, the United States Supreme Court ruled in favor of federal workplace protection for LGBT+ workers in the country. The ruling given on June 15, Monday, was supported by a 6-3 division and stated that the “an individual’s homosexuality or transgender status is not relevant to employment decisions.”

The judgement authored by conservative judge Neil Gorsuch stated that Title VII of the Civil Rights Act of 1964 protects LGBT+ workers as well. The clause explicitly prohibits discrimination in employment over sex, race and other forms of prejudice. The judgement further read, “it is impossible to discriminate against a person for being homosexual or transgender without discriminating against that individual based on sex.”

The landmark judgement is the result of decades of struggle by LGBT+ rights activists and the trade union movement. The judgement came as the conclusion of three cases of discrimination brought up by Aimee Stephens, Donald Zarda and Gerald Bostock. Of the three, only Bostock remains alive to see the judgement.

Stephens, who had worked as a funeral director in Michigan, was fired after she informed her boss that she is transgender and will transition as a woman. Stephens died earlier this year. Zarda, a sky-diving instructor at a recreational company, was fired because he mentioned to a client that he was gay. Bostock was a child welfare coordinator for Clayton County in Georgia State before he was fired for joining a gay softball league team.

The court’s decision is expected to benefit an estimated over 8 million LGBT+ workers in the country. Many of them live in States with no anti-discrimination law or workplace protection for sexual minorities and transgender people.