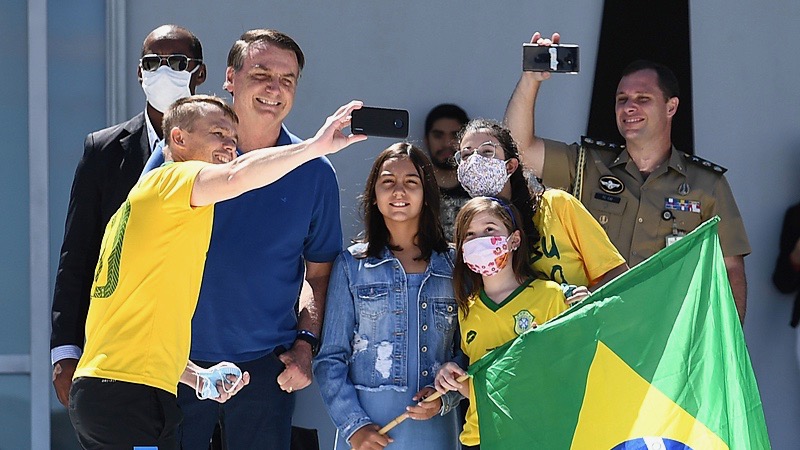 Brazilian President Jair Bolsonaro and his daughter posed for a selfie with supporters, outside Planalto Palace in Brasilia, on May 3, 2020 during the COVID-19 novel coronavirus pandemic. Photo: EVARISTO SA / AFP

According to the country’s health ministry, within 24 hours on Tuesday Brazil recorded a total of 34,918 fresh cases of infection and 1,282 deaths which is one of the highest in the world since the COVID-19 was declared a global pandemic on March 11.

This happened a day after the top official in charge of handling coronavirus in the country Braga Natto announced that the situation is under control.

According to the regional head of the World Health Organization Carissa Etienne, Brazil now alone has more than 23% of all cases in Latin America and 22% of all deaths. Peru with more than 237,000 cases is the second in Latin America. However, the total recorded deaths in Peru is just around 7,000. According to different studies, at the present rate, Brazil is expected to surpass the US in both the number of cases and deaths by the end of July. The US has over 2.2 million infected cases with around 120,000 deaths as of now.

The government led by president Jair Bolsonaro has been called out for its complete failure to take effective measures to curb the spread of the virus. In fact, Bolsonaro has been opposed to restrictions and lockdowns imposed by some of the state governments in the country and ridiculed the seriousness of the diseases by refusing to wear masks and calling it “just a little cold”.

In a statement made on national radio and television channels on March 24, Bolsonaro said that the press exaggerated when they spoke about the pandemic and exploited the case of Italy. Tuesday’s fresh cases are at least five times as much as Italy saw during its peak.

Brazil remains one of the few countries in the world which has not imposed a national lockdown as yet and the Bolsonaro government has even refused to initiate a national test drive.

Bolsonaro has fired two successive health ministers during the crisis due to his disagreements over the need of social distancing and on the use of hydroxychloroquine, the antimalarial drug. Bolsonaro, in line with US president Donald Trump, had emphasized the use of the drug to help treat coronavirus despite health experts expressing suspicion on its effectiveness. On June 15, the US Food and Drug Administration revoked its emergency use authorization of the drug. On the same day, Brazil’s Health Ministry recommended the drug be used by children and pregnant women.