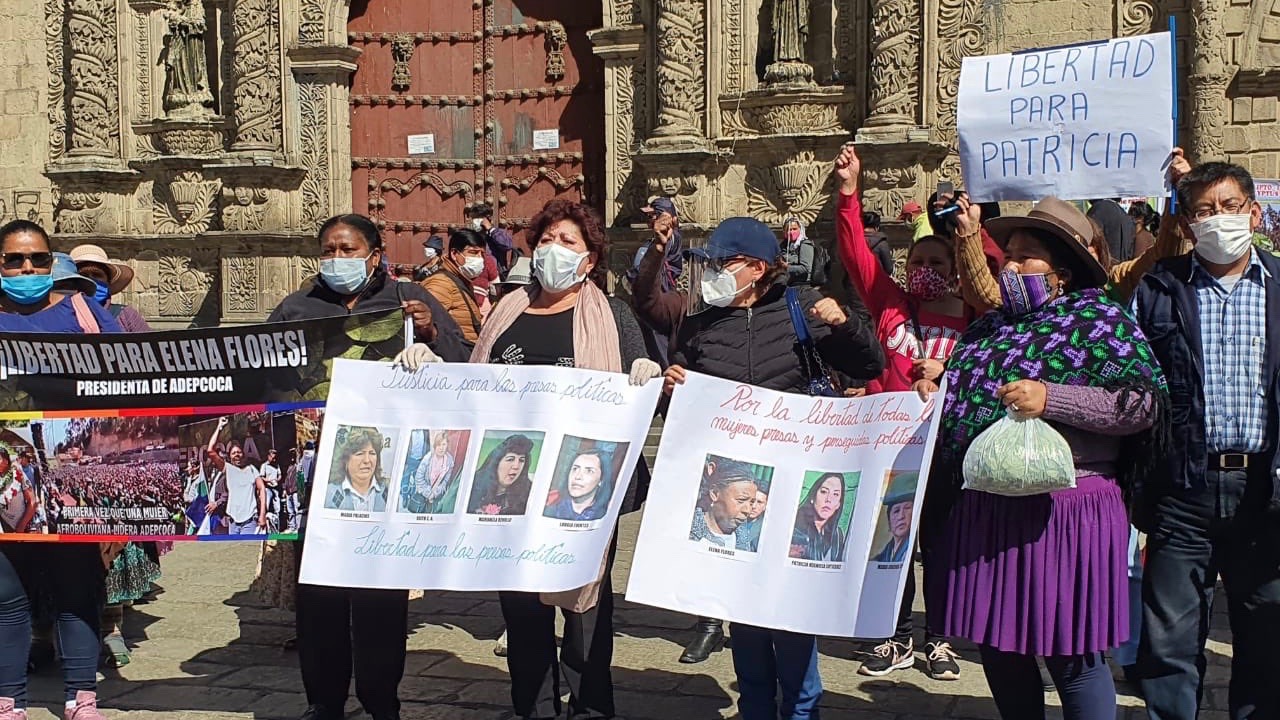 A large group of Bolivians, mostly women, demonstrated in the capital, La Paz, on June 17. They demanded freedom for all female political prisoners, who have been arrested on false charges by the de-facto government led by far-right Jeanine Áñez, after the coup against President Evo Morales in November 2019. In addition to the liberation of the political prisoners, they also called for immediate general elections in the country. Áñez has been trying to delay the elections using the COVID-19 pandemic as a pretext, in pursuit of her imperialist and neoliberal policies.

At around 10 am, wearing face masks, people gathered at the San Francisco Plaza to demonstrate and demand the release of 13 women victims of the selective political persecution by the coup-installed government. The protesters denounced that the imprisonments are the result of Añez’s colonial, patriarchal and dictatorship tendencies.

10am, La Paz: A group of women form a circle in Plaza San Francisco demanding freedom for numerous women who they say are political prisoners of Bolivia's regime, including Afro-Bolivian union leader Elena Flores and attorney for Evo Morales, Patricia Hermosa. pic.twitter.com/mfkabN31R1

The political prisoners, for whom the protest was held, include Afro-Bolivian union leader, Elena Flores, former president Morales’ lawyer, Patricia Hermosa, and the former president of the Supreme Electoral Tribunal (TSE) of Bolivia, María Eugenia Choque.

The president of the coca leaf farmers’ union of the Yungas region, Departmental Association of Coca Producers (ADEPCOCA), Elena Flores, was imprisoned on the false charges of robbery, harming public property and preventing the State from exercising its services on March 4. Patricia Hermosa was arrested by the de-facto government, on February 3, for trying to register Morales as a candidate for the Senate in the upcoming elections. María Eugenia was accused by the coup regime of committing alleged fraud in the general elections of October 20, the claim of the Bolivian far-right that has been once again debunked by researchers from the US.

Other social leaders, who denounced Áñez’s regime for militarization of territories, brutal repression against civilians and disregard for democracy, and were arrested on wrong accusations, are Alejandra Salinas, Catalina Condori, Dora Caludina, Lorgia Fuentes, Maria Palacios, Edith C., Flora Guzmán, Deysi Judith, Martha Rojas and Mariela Revollo. All of them have been held at the Center for Women’s Guidance in the Obrajes neighborhood, La Paz.

The call for the demonstration was given by citizens on social media networks. It received support from the national Human Rights Commission, several women’s movements, Indigenous organizations and trade unions.

In the month of April, over 35 organizations and movements and more than 130 social and political leaders from around the world denounced the coup regime for the unjust incarceration of Elena Flores, the political repression of social leaders and criminalization of social movements and organizations. They also demanded an immediate release of all political prisoners, including former Movement Towards Socialism (MAS) ministers and other social leaders.