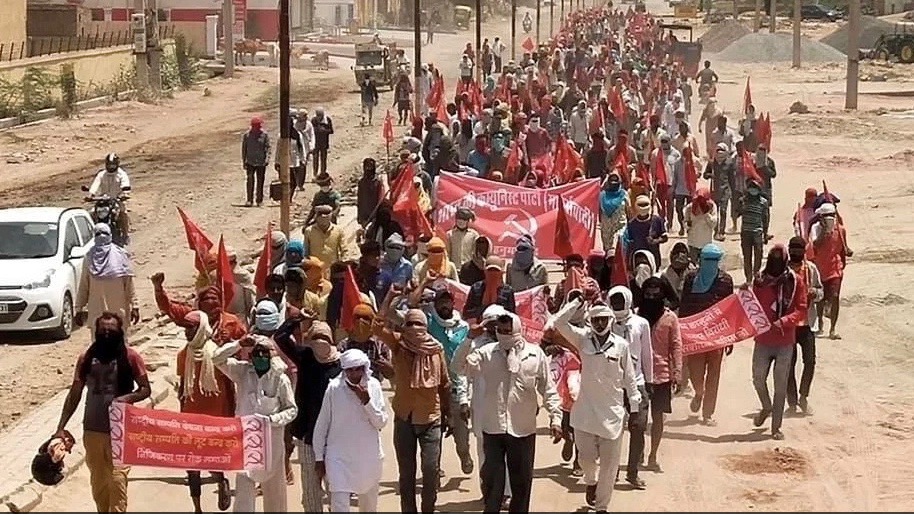 Protesters march as part of the all-India protests called by the Communist Party of India-Marxist (CPI-M) on June 16, Tuesday.

On June 16, Tuesday, a countrywide protest was organized by the Communist Party of India (Marxist) (CPI (M)) against the anti-people policies adopted by the right-wing Indian government led by prime minister Narendra Modi. Several districts across the country witnessed protest marches and demonstrations against the government  for mishandling the COVID-19 crisis and lockdown.

“People are going hungry. They don’t have food to eat. We cannot have hunger deaths and self-reliant India…The heart rending experiences of migrant workers on the roads marching back home has shown the depths of hunger that a sizable section of our people are suffering today,” said general secretary of CPI(M) Sitaram Yechury, who led the protests in the Indian capital, New Delhi.

Among the main reasons for the rising anger, especially among the economically weaker sections in the country, is the ill-planned lockdown that was imposed by the government on March 24. The shut down of the economy rendered millions jobless, particularly in the unorganized sector which employs a majority of the Indian working class.

“At least 150 million people have been rendered unemployed during the lockdown period, adding to the overall huge numbers of the unemployed. A vast section of our people has lost all means of livelihood,” said one of the protesters on Tuesday.

The Indian government led by the Hindu nationalist Bharatiya Janata Party announced the national lockdown on March 24 without any prior notice to the public or measures to deal with its fallout. This led to a major crisis with millions leaving their homes. Those who could not leave the cities struggled to sustain themselves in the absence of proper support.

Media reports showed migrant workers walking for hundreds of kilometers in a desperate bid to get home. Many died on the way in the absence of proper transport facilities and arrangements made by governments

As per the CPI(M), the neoliberal policies implemented by successive governments in India, and vigorously pursued by the incumbent BJP-led government, are among the main reasons for the current public health crisis and the state of workers in the country.  The government has been severely criticized for failing to protect the working class and provide adequate support to the destitute sections of society during the COVID-19 emergency.

Yechury said, “More than 15 crore (150 million) people have become unemployed in these last three months… Instead of giving them resources to live, the government is increasing its taxes to gather more revenue. There cannot be anything more criminal than this.”

The main demands raised by the CPI(M) through the all-India protest on Tuesday include a cash transfer of 7,500 rupees (USD 98.43) per month for a period of six months to all families outside the income tax-paying bracket; free monthly distribution of 10 kg of foodgrains per individual for the same period; a minimum 200 days of employment under the Mahatma Gandhi National Rural Employment Generation Scheme with enhanced wages; extension of the employment guarantee scheme to the urban poor; immediate announcement of an unemployment allowance; and an end to the loot of national assets, privatization of the public sector and scrapping of labor laws.