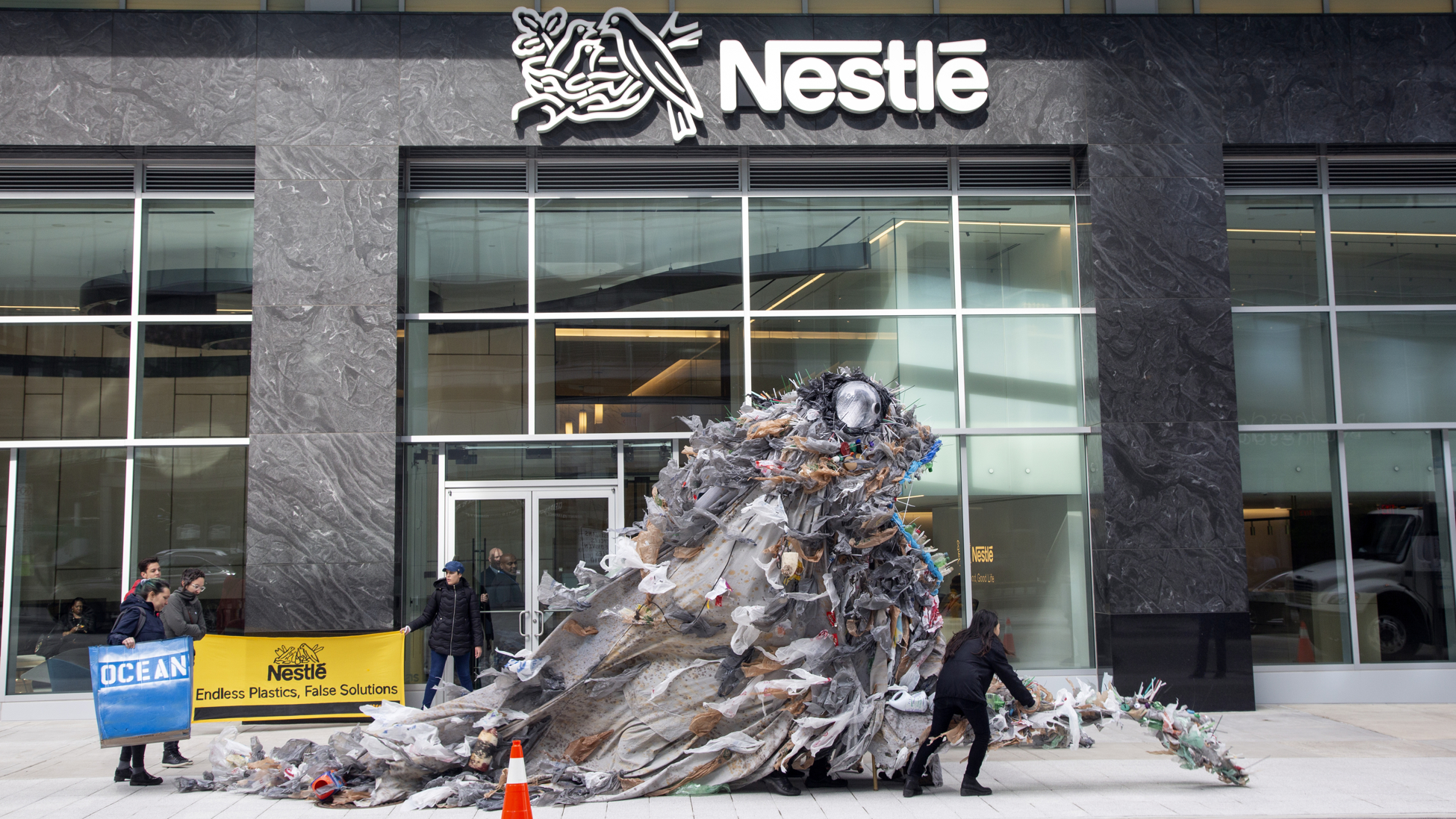 Nestlé has been under fire internationally for its role in environmental degradation and privatization of natural resources. Here activists joined a 15-foot tall monster in a visit to Nestlé’s headquarters in Arlington, Virginia delivering Nestlé plastic pollution gathered from streets, rivers, and beaches across the country and demanding that Nestlé take responsibility for the over 1.5 million metric tons of single-use plastic it produces annually.

Over the last several weeks, articles were published in the Swiss, Canadian and US press informing that Nestlé S.A. was considering to sell all its bottled water brands in the US and Canada.  As written in this article :

“Nestlé S.A.’s Board of Directors today approved a new strategic direction for its Water business. The company will sharpen its focus on its iconic international brands, its leading premium mineral water brands, and invest in differentiated healthy hydration, such as functional water products.(…) At the same time, the Board concluded that its regional spring water brands, purified water business and beverage delivery service at its Nestlé Waters North America unit lie outside this focus. As a result, the company has decided to explore strategic options, including a potential sale, for the majority of the Nestlé Waters business in North America (U.S. and Canada), excluding its International brands. This review is expected to be completed by early-2021.”

However, it seems that there is much more to this than just a business decision: rather it is a maneuver to protect the close relationship between Nestlé and the Swiss Government from public awareness.

This strategy was used previously by Nestlé in Brazil in 2018 when Nestlé announced the sale of all its bottled water brands in Brazil to a Brazilian company. For more than 15 years Brazilian citizens’ movements in the region of Circuito das Águas in the State of Minas Gerais, Brazil, had been fighting Nestlé’s water taking and bottling water facility in the city of São Lourenço. In 2006 the Citizens Movement had its first significant victory: Nestlé had to stop the production of “Pure Life” bottled water in São Lourenço. This victory was only possible due to the fact that the citizens’ movement brought their fight to Switzerland where several NGOs gave their support to their campaign. Articles about Nestlé in São Lourenço appeared in the Swiss French, Italian and German press, and the Swiss Italian TV did a short documentary on São Lourenço. This proved to be a decisive factor in the citizens’ fight against the giant Swiss corporation: the Swiss campaign was too damaging to Nestlé’s image in Switzerland.

In 2018, the World Water Forum took place in Brasilia, capital of Brazil. The WWF is the most important international event on the calendar of private corporations engaged in water privatization. In 2018, for the first time, the WWF had the massive sponsorship of the bottled water sector: Coca-Cola, Nestlé and AB InBEV. The ‘message’ of the 2018 WWF to Brazil was: we want your water. Nestlé announced it would sell its Brazilian bottled water brands just a few months after this forum of multi-national companies. Nestle´s decision to sell the brands of water it bottles in Brazil made no sense unless something else was intended.

Nestlé was present at the WWF in Brazil in the official Swiss Pavilion, alongside the Swiss NGOs HELVETAS and Caritas Switzerland and also the Swiss Agency for Development and Cooperation (SDC). Although Switzerland has one of the best public water services in the world, the Swiss Government directs the SDC to fully support water privatization abroad and Nestlé is a close partner of SDC. The Water Resources Group (WRG), an initiative launched by Nestlé, Coca-Cola and Pepsi to lobby worldwide for water privatization, was funded by SDC and SDC’s Director has a seat on its ‘Governance Council’ (see here)

More than 20 Brazilian NGOs, trade-unions and social movements, aware of this close relationship between SDC and Nestlé,– including Indigenous organizations and the Landless Movement –  sent a public letter to the Ambassador Manuel Sager , then director of SDC, demanding that SDC stop its support to Nestlé’s privatization policies and instead engage for Public-Public Partnerships, therefore helping poorer countries to develop their own public water companies following the Swiss model. (The original letter in Portuguese is here).

The Swiss NGO MULTIWATCH translated this letter into German and made it public in its website (see here).

It was then clear that the Brazilian demand could bring problems to SDC and its partnership with Nestlé. And it was in this context that Nestlé suddenly announced its decision to sell all its Brazilian bottled water brands to a Brazilian company. It was a decision taken in order to protect SDC’s image and to avoid another INTERNATIONAL campaign against Nestlé’s bottled water facilities and water takings in Brazil.

By “selling” the bottled water brands to a Brazilian company, Nestlé put distance between the citizen’s movements fighting the water takings and bottling facilities. This maneuver removed the ‘stigma’ of the Nestlé brand from the new Brazilian owners and protected SDC’s image inside Switzerland from another international campaign that could damage SDC’s image.

The ‘selling’ of Nestlé brands changed nothing in Brazil. The bottling operations and the environmental damage caused by the bottling water facilities continued after the transfer from Nestlé to the Brazilian company. In fact, the only visible change was in the attention the media paid to the citizens’ movements efforts: they got LESS attention from the press because the fight against a giant transnational corporation like Nestlé has much more appeal than the fight against a locally owned bottling company. It was not possible to confirm if the sale really happened or not, since such transactions are kept secret. There was only the announcement made by Nestlé. And there was no information in the press about the ownerships of the Nestlé sources – from where the water comes – only about the brands.

The situation is very similar today to what is happening in the US and Canada regarding Nestlé. A short chronology is necessary to understand the story:

In February 2019 a first international meeting between movements fighting Nestlé water grabbing took place in VITTEL, France, attended by Canadians and myself from Switzerland and Brazil. In November 2019 the Canadian grassroots organization Wellington Water Watchers organized the “All Eyes on Nestlé” event, bringing together citizens’ movements from the US, Canada, France and Brazil /Switzerland all engaged in the fight against Nestlé. Another international meeting, planned to take place in March 2020 in Switzerland, was cancelled due to the COVID-19 pandemic.

In the meantime, the Swiss Minister for Foreign Affairs Ignazio Cassis pushed a new strategy for SDC: more engagement of the private sector – including Nestlé – with the Swiss Development Aid. An important step in this direction was already taken by SDC in October 2019 when Christian Frutiger – ex- Nestlé Head of Public Affairs – was appointed as Vice-Director of SDC! This nomination would have passed unnoticed by the Swiss public if it were not for an international petition launched in the US by Story of Stuff and addressed to Ignazio Cassis demanding that he revoke the nomination of Christian Frutiger. (See here). The Swiss press took up the issue and several articles were published on this issue.

The Swiss political NGO PUBLIC EYE then published a report (here in French) about the private sector and Swiss development aid. Public Eye had access to some official documents that were made public in this report, including a Memorandum of Understanding (MOU) signed in 2017 between Nestlé and SDC (see it in English here).

In this document, the names of the people who signed the MOU on behalf of Nestlé and SDC were censored but a journalist from BLICK published an article on Sunday June 7th confirming that Christian Frutiger signed it on behalf of Nestlé.

To make it clear: SDC and Nestlé agreed on a MOU where it is written on pg. 3:

“Nestlé is therefore prepared to invest resources and knowledge in communities and the environment through public-private partnerships, provided the investments create long-term business values too”.

Less than 2 years later, Mr. Christian Frutiger, who signed this MOU on behalf of Nestlé, is appointed Vice-Director of SDC. Under his direct control are SDCs program on Climate Change and…WATER!!!! The incestuous relationship between Nestlé and SDC is becoming a scandal in Switzerland and the Swiss Minster of Foreign Affairs Ignazio Cassis is under much public criticism.

Some Canadian organizations sent letters to Alliance Sud – a coalition of Swiss NGOs – setting out their worries about the nomination of Christian Frutiger at SDC and informing Alliance Sud about some of the problems with Nestlé in Canada. (these letters can be read here)

If the bottled water brands of the US and Canada are sold to other companies – local or national ones – Nestlé immediately ceases to be the target of the many community groups fighting to keep their waters or to protect their environment – this problem is transferred to the new owners. Even better: an international campaign addressing Nestlé in Switzerland for what is happening in the US and Canada is not any more possible. Nestlé Switzerland can claim it has nothing to do with the issue any more, as it did in Brazil, even if the ‘selling’ is just a maneuver, a fiction built exactly to avoid an international campaign focussed in Switzerland. Such a campaign would also show that there are patterns repeating themselves wherever Nestlé is taking water for its bottling facilities – the problems in the communities in US or Canada or France are basically the same: a consequence of the water policies of Nestlé decided at the higher levels of the corporation.

SDC, the Swiss Government, Swiss political parties – from the right to the left – and NGOs engaged in protecting Nestlé in Switzerland are spared from a very embarrassing situation if Canadian and US citizens’ organizations do not come to Switzerland to denounce what Nestlé is doing in communities in these countries. Nestlé is very much aware that social movements fighting Nestlé in Canada and the US have the means and the power to challenge this corporation in its home country, Switzerland. And although SDC of course do not provide ‘development aid’ to northern countries and theoretically SDC has nothing to do with countries such as France, Canada or the US, the fact that in such rich and traditional western democracies communities are fighting against Nestlé to preserve their environment and waters is a clear warning about what  happens when Nestlé – with the support of SDC – is active in poorer countries with much more fragile democratic institutions.

Every possible measure should and will be taken in order to keep Nestlé’s close relationship with the Swiss Government protected from a deeper look by the Swiss citizens. The image of Nestlé in Switzerland is too valuable and the partnership with the Swiss government too important to be risked. This is the main reason why Nestlé is considering to ‘sell’ its bottled water brands in the US and Canada: so that everything can remain the same.