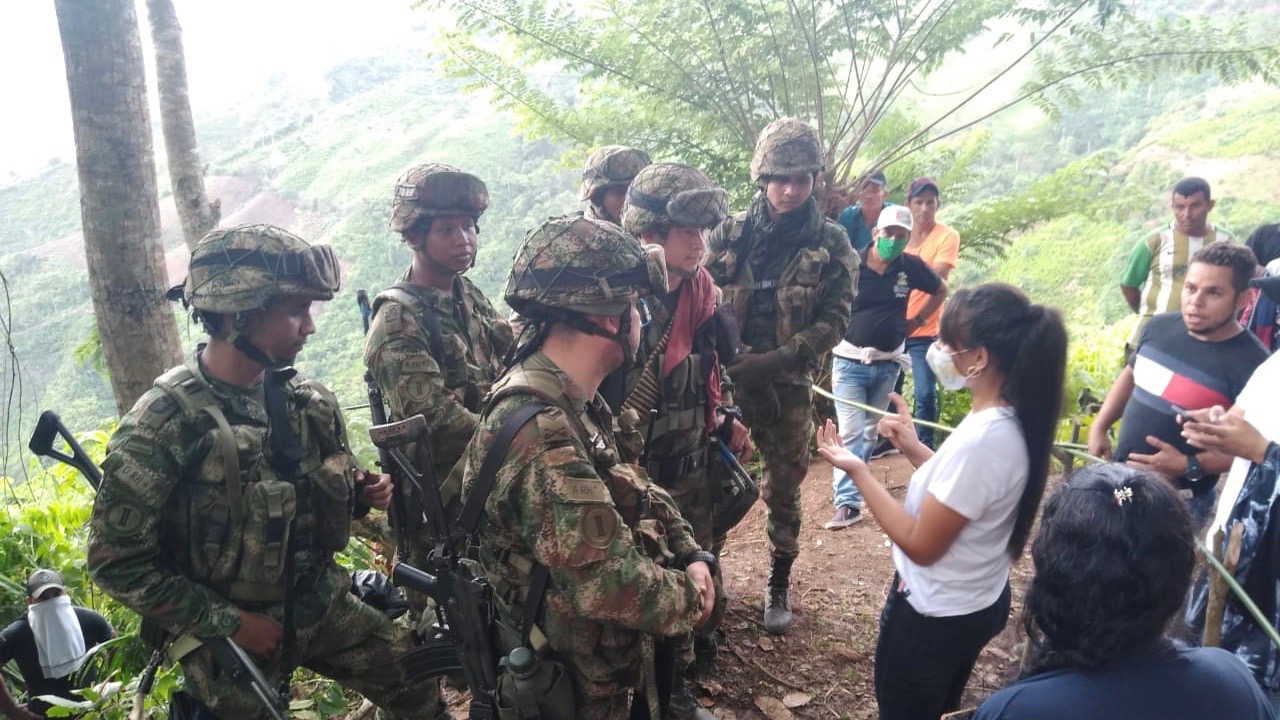 A series of assassinations of social leaders shook Colombia this weekend. In less than 24 hours, 4 Indigenous, peasant and social leaders were killed in the departments of Chocó, Guaviare and Meta, North Santander and Sucre. The news of the rape of a 13-year-old Indigneous Embera girl by 7 soldiers has also sparked mass outrage. Despite the national lockdown due to the coronavirus pandemic, the Colombian people continue to suffer at the hands of security forces and far-right armed groups.

The Catatumbo Peasant Association (ASCAMCAT), through a communiqué, denounced that after hearing gunshots, the community members rushed to the site and saw “four uniformed people running from the scene.” The association also said that the uniformed people, after running a few meters, joined the national army patrolling team. When the members spoke with the officer in-charge of the BATOT-11 patrol security, he denied that those uniformed men were from his team.

The Social Integration Committee of Catatumbo (CISCA) and the Association for the Promotion of Social Alternative MINGA denounced Salvador’s murder as a case of extrajudicial execution. The organizations demanded impartial investigation and justice for Durán.

Additionally, in the early hours of June 28, 68-year-old Ovidio Baena, a former leader of the oil workers union Unión Sindical Obrera, was attacked by unknown men with sticks in his farm in the Macayepo village, Montes de Maria, in the Sucre department. His relatives took him to a municipal hospital, where he died a few hours later due to the fatal injuries suffered from the attack.

Ovidio was also a member of Colombia Humana, a coalition of progressive forces and social and youth movements. Gustavo Petro, opposition leader and founder of Colombia Humana, rejected Ovidio’s assassination and tweeted that “the army refuses to acknowledge that Montes de Maria is being taken over by paramilitaries from Clan de Golfo group.”

The same day, 22-year-old Javier Uragama, Indigenous governor of Agua Clara, was found dead and with signs of torture, in Bajo Baudó municipality, Chocó department, after disappearing on June 25.

The National Indigenous Organization of Colombia (ONIC) condemned Uragama’s homicide and demanded protection for social leaders and human rights defenders in the region.

Likewise, Yohanni Yeffer Vanegas, a peasant leader and an ex-member of the Revolutionary Armed Forces of Colombia (FARC), was found dead with gunshot wounds in the Guayabero region located between the departments of Guaviare and Meta.

Vanegas was one of the peasant leaders who carried out peaceful demonstrations from May 20 to June 16 in the region, demanding implementation of crop substitution plans without forced eradication. Despite being well aware of the identities of the organizers, the military and departmental authorities had alleged that these mobilizations were organized by guerrilla groups.

Senator Victoria Sandino, from the Common Alternative Revolutionary Force party, condemned these assassinations and held the national government responsible for them. “The State is responsible for these crimes as it has failed to guarantee the lives of those who exercise social leadership in the country. Seeing these crimes only as numbers dilutes the importance for communities. We need to know what happened, who gave the order and (make sure) that history doesn’t repeat itself,” wrote Sandino in a tweet.

On June 22, a 13-year-old Indigenous girl was kidnapped and raped by seven soldiers on a sidewalk in the Pueblo Rico municipality, in the Risaralda department. On June 25, the soldiers admitted their crime before a judge in the departmental Attorney General’s office, but they have not been arrested yet.

Armando Valbuena, spokesperson of the ONIC, told the BBC that the sexual harassment of Indigenous girls by soldiers and paramilitaries has become a widespread problem in rural areas of the country.

Only three days later,  a 15-year-old boy was ruthlessly murdered at the hands of the Mobile Anti-Disturbances Squadron (ESMAD). On June 25, ESMAD were forcefully evicting unarmed poor homeless locals and migrants from a settlement on vacant lots in the municipality of Soacha, to the south of Bogotá. In an attempt to intimidate the population, the ESMAD officials fired several shots at the people, who were protesting the eviction highlighting that evictions amid the COVID-19 pandemic is inhumane. One of their shots hit young Duván Mateo Aldana in the neck and killed him.

Progressive leader Gustavo Petro also condemned Aldana’s assassination and questioned the evictions amid the pandemic. “ESMAD murders a child in Soacha. It is a war against the poor. While indifferent President Iván Duque delivers public money to the owners of banks, big companies, and large estates,” he wrote in a tweet.

Several social activists, human rights defenders and lawyers denounced his murder as a act of police brutality and demanded immediate investigation and justice for him.

On June 28, the Attorney General’s Office announced to start a criminal investigation for the events surrounding Aldana’s death.

Response of the people

In order to draw the government’s attention to these serious structural issues and to establish dialogue with the victims of political violence and social injustice, a group of 14 social leaders and human rights defenders from 40 social organizations and movements from southwestern Colombia, is carrying out a “March for Dignity”  from the city of Popayán in the Cauca department to the capital city Bogotá.

On June 25, the group began walking to demand respect for life, territory and rights of the Indigenous people, Afro-descendants and peasants and take measures to stop their genocide. During their 15 to 20 days long journey, they are expected to visit 22 municipalities.

The main objective of this peaceful protest is to generate effective actions to protect life against the genocide of social leaders as well as human rights defenders in the country by means of effective communication. The group also seeks to demand that the government advance towards the comprehensive implementation of the peace agreement signed between the former government of President Juan Manuel Santos and the guerrilla group FARC in 2016, in Havana, Cuba.

Additionally, on June 28, at 18:00, a virtual candle march was held in solidarity with the communities of Catatumbo and in rejection of the possible return of the “false positives”. People shared photos of candles on their social media accounts using hashtag #ElRegresoDeLosFalsosPositivos (#TheReturnOfFalsePositives).

In Colombia, “false positives” refer to the kidnapping and murder of civilians by the Colombian National Army, presented to authorities as guerrilla fighters killed in combat. Between 2006 and 2009, during the Democratic Security program of the Álvaro Uribe government, the military officials were rewarded with promotions or other benefits for the capture of dead or alive guerrilla fighters.