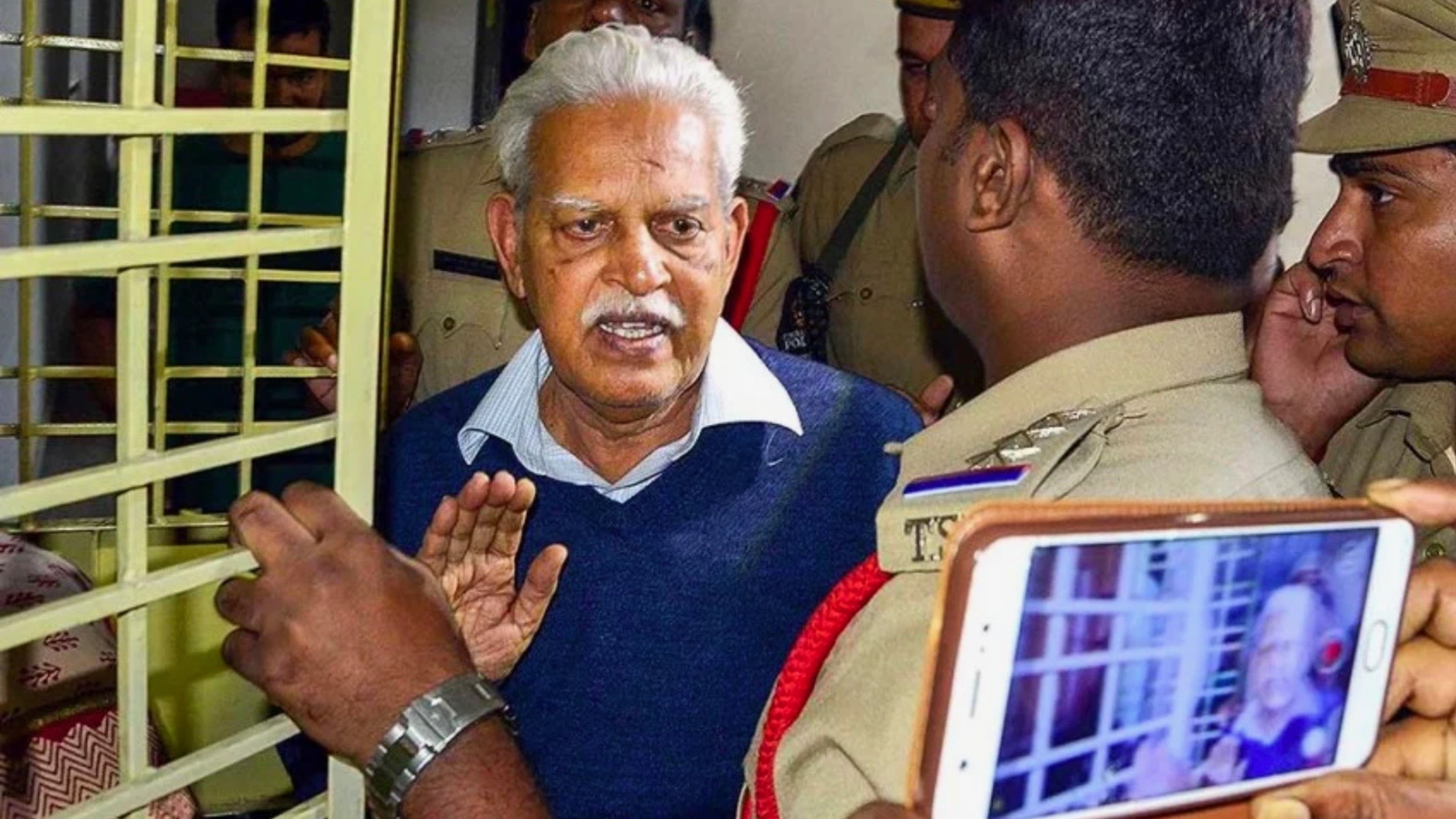 On July 13, Monday, Indian poet and activist Varavara Rao, who is a political prisoner, was shifted from the Taloja prison to the JJ Hospital in Mumbai following a drastic deterioration in his health. Over the weekend, his family had said that Rao, who is 79 years old and has been in prison since late 2018, was beginning to suffer from brain damage.

Varavara Rao is one of the 11 political prisoners arrested in the controversial Elgar Parishad case. He is accused of the outlandish charge of being associated with banned maoist outfits and plotting the murder of Prime Minister Narendra Modi. Critics say that Rao, a renowned Telugu intellectual, poet and a professor, is being harassed for being critical of the current establishment.

On the evening of July 11, when Varavara Rao’s wife, Hemalata, 72, asked him over phone if he was okay, he struggled to comprehend the question. “He started talking about his father’s funeral instead,” said a concerned N. Venugopal, Varavara Rao’s nephew. “His father died when he was three years old. It was 75 years ago. He was hallucinating.”

Concerned about the deterioration in his health, Rao’s family held a virtual press conference on the morning of July 12 to make some of the details public.

Varavara Rao was first admitted to JJ Hospital in Mumbai on May 28 after he had fallen unconscious in jail. “He was under medical supervision for three days,” his nephew said. He claimed that he was discharged hurriedly on June 1 so “National Investigation Agency [which is probing the case] and prosecution could argue in court that he was fine at the time of discharge.”

In the next 41 days Rao was in prison, the family members spoke to him four times and experienced a steady, alarming deterioration in his health. The four calls happened on June 7, June 24, July 2 and July 11. “The first call was okay,” said Venugopal. “In the second call, his voice was weak, he was incoherent and confused.”

On July 2 as well, Rao couldn’t speak properly. But it was the last call on July 11 that sent tremors among the family members.

Besides talking about his father’s funeral, he spoke like a child, said Pavana, his youngest daughter. “My father remembers old, historical dates,” she said. “He is an orator, a public speaker. He has never had a problem with words. But in the last two phone calls, he couldn’t speak with fluency. Between every word, there was a gap. When we asked how he was, he kept repeating ‘I’m good, I’m good’, like a child. It was horrifying.”

A tearful Venugopal added, “Don’t kill him in jail. His brain is getting damaged,” after which, Rao’s wife, Hemalata took over and addressed the press in Telugu. She broke down in the middle of the address, which is when Pavana spoke.

At the time of the call, Rao’s co-accused Vernon Gonzales, human rights activist, was with him. Vernon informed the family members that Rao has been “unable to walk on his own, unable to go to loo on his own, unable to brush on his own. Someone is assisting him.” Vernon further told the family that Rao has been hallucinating in the prison hospital, saying his family members are at the gate since he is being released. “We asked him about the treatment inside the hospital and Vernon specifically told us there is no treatment,” said Pavana.

The Elgar Parishad case has to do with violence that broke out in the State of Maharashtra in 2018. Initial investigations pointed to the role of Hindu right-wing fundamentalists. However, the case soon shifted track and activists, left-wing intellectual and critics of the government became suspects.

Ever since the outbreak of coronavirus, the family members of prisoners lodged in the case have been demanding bail on medical conditions. Rao, among them, is in the most precarious state with several comorbidities.

During a pandemic, even if prisons are packed to their original capacity, it is said to be dangerous for the well-being of prisoners. In Maharashtra, the prisons are seriously overcrowded and fertile ground for the spread of coronavirus.

Therefore, on March 23, the Supreme Court of India asked the state governments to decongest prisons in order to prevent the spread of the disease. The Maharashtra government, led by Chief Minister Uddhav Thackeray, subsequently constituted a high-power committee (HPC) to decide on the release of prisoners.

However, as of May 31, Maharashtra’s 60 prisons had 28,920 inmates. According to the data on June 19, that number stands at 28,950. In other words, 30 prisoners have instead been added in the 20 days of June. The official capacity of all the prisons in the state is actually 24,030. In order to be a safe space during a pandemic, the prisons need to be decongested down to 16,000 inmates.

Venugopal said the family is used to fabricated cases being lodged against Rao, but he has always come out clean. But he was in good health then.

Eventually, with a lump in her throat, and in a quivering voice, Pavana concluded, “If a poet and intellectual like Varavara Rao is going to die in jail because of negligence of the government, that would be pathetic.”

(A version of this story, written by Parth MN, was originally published on Newsclick on July 12. It has been updated to reflect recent developments.)