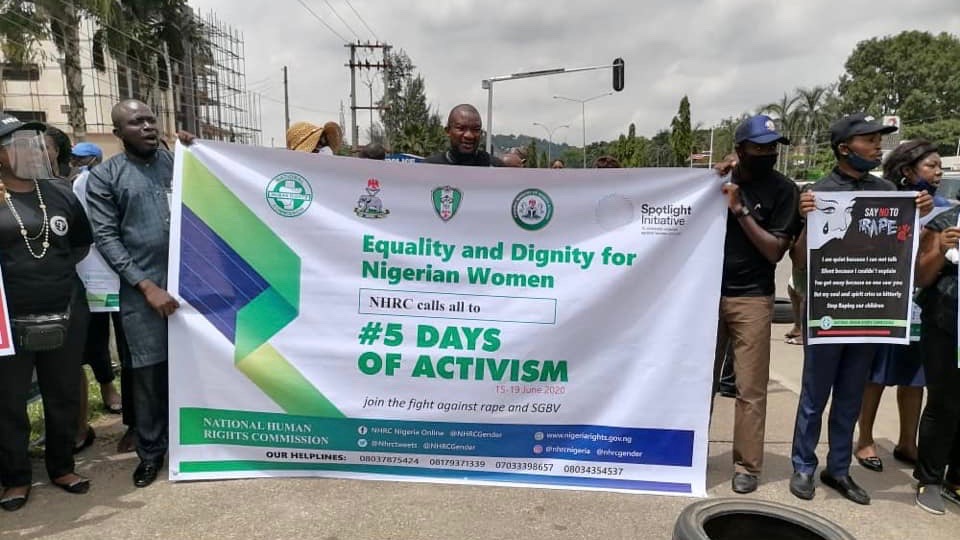 Workers from Nigeria's NHRC in a protest against gender-based violence in June. Unionized workers had set to go on strike beginning tomorrow but a court issued an order against the workers' industrial action. Photo: NHRC

On Wednesday July 15, an industrial court in Nigerian capital Abuja gave an interim order interdicting the strike action which was planned by the workers of National Human Rights Commission (NHRC).

Until the court’s final decision on the matter, the order also prohibits these workers from holding any meetings, protests, rally or other forms of gatherings to mobilize for any form of industrial action against the non-payment of minimum wages.

This order came after the Commission, charged with protecting human rights, went to court to stop its workers from exercising their right to strike. The strike action was scheduled to begin from July 16, and continue indefinitely, until their demands were fulfilled.

Workers are demanding the implementation of the minimum wage bill and payment of arrears resulting from non-compliance with it for over a year since it was passed. They also point out that their revised allowances have not been paid out.

The minimum wage bill was passed by the government under president Muhammadu Buhari in April 2019 after multiple strike actions and other forms of labor agitations in the later part of 2018 and early 2019, led by the umbrella organization, Nigerian Labor Congress (NLC), comprising multiple trade unions.

The bill mandates all public and private organizations hiring 25 or more workers to pay a minimum wage of N30,000 per month. However, over a year later, the full implementation of the bill remains pending.

In a letter addressed to executive secretary of the NHRC, Tony Ojukwu, dated July 6, the Nigeria Civil Service Union’s Secretary, Sani Rasheed Olawale, demanded the “implementation of the National Minimum Wage and Human Rights Protection allowances.. before the expiration of the ultimatum at the midnight of Wednesday, 15th July 2020.”

“Otherwise,” the letter had warned, “we will be left with no opinion.. (but) to shut down the commission indefinitely on Thursday 16th of July 2020 until our request is granted.”

As the deadline approached, Ojukwu sought to convince workers to desist from embarking on the strike, stating that the federal government had not released funds to the NHRC to pay the arrears and the investigative allowances, which the union has been demanding.

He also sought to assure that the commission is trying to persuade the government to release these funds, and said that workers in other investigative agencies are also suffering the same plight.

Employees of the Independent National Electoral Commission (INEC) Public Complaints Commission and the judiciary are also yet to receive the minimum wage and arrears resulting from its non-payment since April 2019.

Only the ministries, departments and agencies (MDAs) of the Integrated Payroll and Personnel Information System (IPPIS) “have been paid the new minimum wage and arrears,” Ojukwu said.

The investigative allowances granted to NHRC workers had not been reviewed for a decade until the National Income, Salaries and Wages Commission (NISWC) recently recommended a hike to the Secretary to the Government of the Federation (SGF).

“The office of the SGF and Federal Ministry of Finance, however, have been delaying to approve the recommended allowances by NISWC.. This is affecting staff morale and jeopardizing investigation of complaints on human rights violations,”as per Ojukwu.

After thus seemingly acknowledging that the grievances of the workers were genuine, the NHRC nevertheless went to court and sought an interdict, barring its workers from strike, shutting down offices, or even gathering in protest.

The order further adds, “The defendants are also restrained from summoning any meeting, holding any rally or convocating any gathering or implementing/planning in doing anything in preparation of or in furtherance of the said” actions.

The irony of the national human rights body moving to court to restrain its workers from exercising their labor rights did not evade Chidi Odinkalu, a former NHRC Chairperson, who wrote on twitter: “In a starkly ironic twist today in Abuja, NHRC procured an ex parte order from the National Industrial Court (without a return date) precluding its staff union from exercising their trade union rights.”