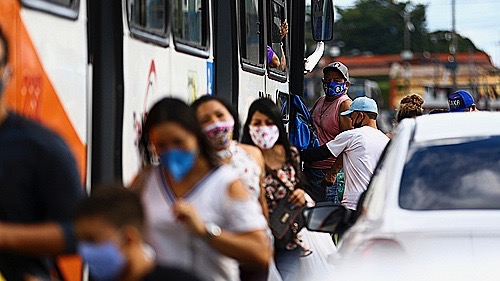 People in Brazil risk taking public transportation and leave their homes in order to make a living amid the pandemic. Latin America and the Caribbean has become one of the central COVID-19 hot spots. Photo: Brasil de Fato

The Latin American and the Caribbean region is emerging as the new epicenter of the COVID-19 pandemic. The number of people infected and killed by the novel coronavirus has increased significantly during the first two weeks of this month. The acceleration is driven by the easing of quarantine measures and the lifting of restrictions on economic activities. The governments have rushed workers to return to work without enforcing strong sanitary measures. As of July 15, the region has registered over 3,497,000 confirmed cases of coronavirus and 149,769 deaths from the disease.

The spike in the number of cases has escalated the crisis in healthcare systems across the region. The healthcare system is on the verge of collapse in countries like Brazil and Chile, where the neoliberal governments have refused to close down economic activities to curb the spread, prioritizing the economy over people’s lives. In Ecuador, testing has been limited and the country is struggling for test supplies.

The steep fall in international business and trade has affected the economy of all countries across the globe. Millions of jobs have been lost and millions of people working in the informal sector have lost their sources of income due to lockdown measures and are living in dire conditions. The economic impacts are widening the socio-economic gap around the world.

The cases and deaths are growing faster in the poorest neighborhoods of big cities. The residents face overcrowding, have limited access to potable water, cooking gas, healthcare services and lack proper sanitation facilities.

Several reports, published by international and regional organizations on the impacts of the COVID-19 pandemic on Latin America and the Caribbean during the months of June and July, indicate that the economic, health and social crisis is going to aggravate in coming months and will have devastating effects on the region.

In the beginning of this month, the World Bank (WB) in its latest forecast said that Latin America and the Caribbean would suffer the worst economic recession in its history in the aftermath of the pandemic. According to a report released by the WB on July 1, the regional economy is expected to shrink by 7.2% in 2020, worse than during the Latin American debt crisis of the 1980s.

In its last report published on April 12, the WB estimated a drop of 4.6% in the Gross Domestic Product (GDP) of the region in the year 2020.

At the end of the last month, the United Nations World Tourism Organization (UNWTO), on June 29, informed that the drop in tourism due to the novel coronavirus could severely damage the economies of Small Island Developing States (SIDS).

Since tourism is a strong socio-economic pillar of many SIDS, the crisis in the sector places millions of jobs and businesses at risk, with women and informal workers being the most vulnerable. The UNWTO estimated that SIDS economies could shrink by 4.7% in 2020, due to the decline in international travel by 58% to 78%.

These Caribbean countries, such as Antigua and Barbuda, Bahamas, Barbados and Jamaica, among others, which are highly dependent on the jobs and income generated by tourism, will heavily feel the economic shock.

The PAHO warned that the coronavirus death toll in the region could quadruple by October if strict public health measures are not implemented.

“Latin America and the Caribbean are expected to have more than 438,000 COVID-19 deaths by October 1 at the current pace,” said Carissa Etienne, the director of the PAHO, at the time when the death toll was over 110,000 in the region.

The PAHO informed that Chile and Colombia are expected to reach their peaks in mid-July, while in Brazil, Peru, Argentina and Bolivia the highest point is expected to come in August. Mexico and most of Central America are likely to reach the peak in mid-August. The organization praised Caribbean countries for effectively curbing transmission.

A report released by the University of Washington’s Institute for Health Metrics and Evaluation (IHME), on June 24, also confirmed that the region would face the most challenging period of the pandemic over the next three months. The institute has projected that the death toll would increase by three times by October.

Social impacts of the pandemic

Plan International (PI), a global NGO, on June 23, cautioned that the pandemic could widen the gender-based education gap in the region. The NGO argued that due to the pandemic’s economic impacts on Latin America and the Caribbean, low-income families might not be able to afford children’s education. The NGO highlighted that in the specific case of girls, gender-based violence, which has significantly increased during quarantine, and lack of access to reproductive health rights, could exacerbate the problem.

Many girls may be out of school due to “a combination of risk factors such as gender-based violence, early pregnancy, early and forced marriages and child unions, assumption of household responsibilities, and lack of access to sexual and reproductive health,” stated PI.

For this reason, PI warned that “if governments do not take urgent measures, including raising awareness among parents to guarantee their daughters’ return to schools,” the gender gap in terms of access to education could go back decades.

Additionally, the United Nations Economic Commission for Latin America and the Caribbean (ECLAC) and the International Labor Organization (ILO) alerted that the impacts of the pandemic as seen in the reduction of incomes and high levels of economic insecurity in families, could generate a significant increase in the number of children and adolescents in child labor in Latin America and the Caribbean.

A joint report released on June 12, in commemoration of the International Day Against Child Labor, stated that “the slowdown in production, unemployment, low social protection coverage, lack of access to social security and higher levels of poverty are conditions that favor the increase in child labor.”

The ECLAC and the ILO estimated that child labor could increase by 1% to 3% in the region. This implies that “at least between 109,000 and 326,000 children and adolescents could enter the labor market, adding to the 10.5 million that are already in child labor at present.”

The report added that “the indicators of child labor and hazardous adolescent work could increase significantly if measures and strategies are not implemented to reduce the impact.”

For this, the organizations proposed to implement a basic emergency income for six months for all persons in poverty during 2020, including children and adolescents.