“The people of Jammu and Kashmir are still in shock,” Mohammed Yousuf Tarigami told me from Srinagar on August 4, a day before the anniversary of what he calls a ‘betrayal’. What happened on August 5, 2019? Without warning, the government of Prime Minister Narendra Modi announced that it had abrogated Article 370 of the Indian Constitution; the State of Jammu and Kashmir was divided into two union territories, to be governed directly from New Delhi. “We are holding on somehow,” Tarigami said. “People continue to suffer on all fronts. Political activity remains under siege; the government is in tatters, and the security situation gets worse.”

Tarigami, the leader of the Communist Party of India (Marxist) in Jammu and Kashmir and an elected representative of the J&K Legislative Assembly before it was dissolved, is equal parts plaintive and defiant. It is hard not to be plainly upset by what is being done to the people of Kashmir, but it is impossible to allow that sadness to overcome someone who has spent his life fighting for justice and equality.

In the pandemic’s shadow

The coronavirus pandemic has rattled India, which is now one of the worst-hit countries on the planet; this is largely a consequence of the incompetence of the government, which whittled away India’s public health system, did not prepare for the arrival of the virus, callously shut-down the country, and has failed to properly test, trace, and contain the spread of the virus.

In the shadow of the pandemic, sits Jammu and Kashmir, whose 125 million people have been placed under virtual house arrest with little access to the internet. Eyes turned briefly to the area when Indian and Chinese troops clashed in the Galwan River Valley in June; but even those eyes – some anxious, many angry – turned away soon enough. The people of Jammu and Kashmir were again to be ignored.

A year has gone by since Article 370 was shredded, but that is not the anniversary that we are thinking about. “Kashmir is facing an unprecedented harsh clampdown since the ascendance of Narendra Modi,” Tarigami tells me. Modi, he says, has “dumped the sensitive issue of Kashmir in Nagpur”, meaning that Modi – a loyal member of the Rashtriya Swayamsevak Sangh (RSS) – turned to his parent organization based in Nagpur for orders on Kashmir. Indeed, against the tide of political opinion in India, the RSS campaigned against the terms of the Instrument of Accession (1947) by which Jammu and Kashmir joined the Indian union; in 1953, the RSS and its associates formed the J&K Praja Parishad which began a movement for the ‘complete integration’ of the State – which meant an end to the process that led to the special provisions in Article 370.

In 2019, the BJP finally enacted what the RSS had wanted 66 years beforehand. And with this act, the BJP is using the removal of Article 370 to deepen “communal faultlines in Jammu with a clear objective of the polarization of the electorate,” Tarigami tells me. It is also using this act to inflame communal tensions across the country. These are old plots and ancient strategies, which go back to the origins of the RSS and its suffocating vision for India.

The people of Jammu and Kashmir became citizens of India in 1956, when the state adopted its constitution and defined the State as ‘an integral part’ of India. This accession was fraught, remaining challenged by the RSS forces and being put under strain as the politics of the state became less and less free to develop as New Delhi interfered with political interventions and then with an armed force that totals nearly 7,00,000.

The District Magistrate of Srinagar – Dr. Shahid Iqbal Choudhary – has imposed a curfew on Srinagar for August 4 and 5 in anticipation of protests. The notice said that this was done because the government believed that ‘separatist and Pak-sponsored groups are planning to observe 5 August 2020 as Black Day’. Evidence is unnecessary. The constitutionally protected right to protest has been withdrawn from Kashmir. “It is pathetic,” Tarigami says.

“It seems that the rights of people neither matter nor count,” Tarigami tells me. The press is muzzled, and any politician who “does not toe the line of the Modi government is either detained under the Public Safety Act or facing house arrest. The use of Anti-Terror laws against innocent civilians, journalists, and students has converted citizens into subjects. We are in a state of hopelessness mixed with simmering discontent.”

In July 2020, The Forum of Human Rights in Jammu and Kashmir released a report (Jammu and Kashmir: The Impact of Lockdowns on Human Rights) that calculated that the economy of the state has lost Rs. 40,000 crore (USD 5.3 billion) over the past 11 months. Every class is struggling, but the burden is being borne by the unorganized workforce, the peasants, the artisans, the small traders, and anyone whose livelihood depended on tourism, handicrafts, and transport. The people, Tarigami tells me, “face tremendous hardship”.

“The biggest struggle”, says Tarigami, “has been to secure life. You have to keep on living even under these tough conditions, such conditions that undermine the very ground of life.” The facts are painful. Since August 5, 2019, at least 456,000 people have lost their jobs and farmers have been pushed out of 6,000 acres of fertile land that has now been earmarked for the industry.

Over 75% of all the apples eaten in India are produced in Kashmir, with a turnover worth Rs. 8,000 crores (USD 1.06 billion); about 350,000 people – half the population of Kashmir Valley residents – rely upon this industry, which is being killed off by the clampdown.

Apples die on the trees, while workshops remain silent.

The Modi government said that this new mechanism of the union territories and New Delhi’s direct rule over the region would increase the security of the border. However, the facts show otherwise. From January to June 2020, there were 2,300 ceasefire violations on the India-Pakistan line of control as against 1,321 in the same months last year before the abrogation of Article 370.

Narendra Modi’s government does not seem to have a “clear institutional view”, Tarigami tells me; it “suffers from conceptual disarray”. The government decided to abrogate Article 370 without any consultation in the state. It introduced a domicile law that alienated the population and locked down the state allowing only intermittent 2G access to the population. Politicians were detained with no avenue left for Delhi to hold a genuine political dialogue with the people. The borders with Pakistan and China have become hotspots. There is no plan to reverse the economic suffering.

The only concept that seems to matter is communal polarization. “The government”, Tarigami says, “is using its energies to divide the ranks of the people on the basis of religion and region.” That is what the RSS has been doing since its founding in 1925. There is mischief here; the consequences “serious and unthinkable,” Tarigami says. 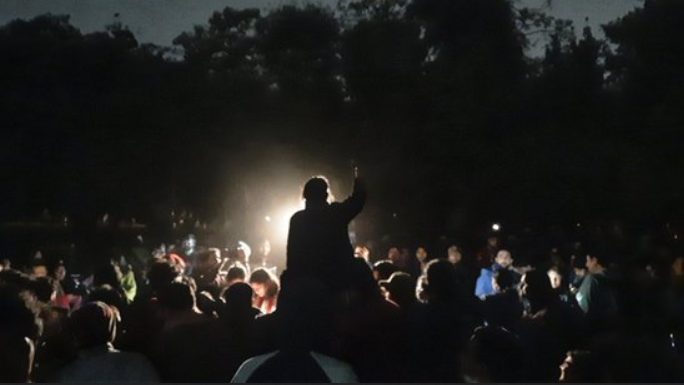