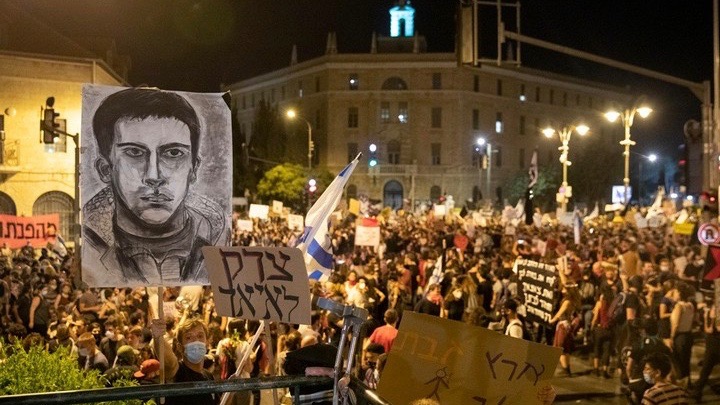 On July 14, a small-scale protest began in Israel. In the forefront were a handful of upper-class, ‘non-partisan’ groups, demanding the resignation of prime minister Benjamin Netanyahu over his corruption cases trials. The protest gradually increased in size with participation from wide sections of Israelis and calls of  “Bibi [Netanyahu] out” and “Your time is up”. Protesters withstood police oppression and as the participant-mix diversified, the nature and scope of the demands evolved. The fundamental changes in the issues raised in the protests may now lead to a long-term impact on Israeli politics and the future of the anti-occupation left.

How did it start?

Anti-corruption protests have been taking place in Israel over the last few years, “originally initiated by a non-partisan movement consisting mostly of older people,” as per the secretary of the Jerusalem district branch of Hadash, Maor Yavetz, in his interview with the Young Communist League’s quarterly Challenge. Hadash is a front created by the Israeli Communist Party, which currently leads the Arab Joint List in the Israeli parliament.

The protests became significant after protesters camping in western Jerusalem were forcefully evicted by the police and municipal authorities in July.  Outraged protesters gave the call for “the siege of Balfour”, referring to the street housing the official residence of the prime minister in western Jerusalem.

On July 14, a small number of protesters began a permanent sit-in at Balfour street. They were met with brutal police action and some were arrested in a bid to crush the protest. However, the heavy-handed response triggered increased mobilization for the protests. On July 31, the far-right pro-Netanyahu group La Familia attacked the protesters, chanting slogans like “death to Leftists” and “I hate Arabs”. This too led to greater public support for the protesters.

Who are the organizers?

Initially, the protesters belonged to a small, seemingly non-partisan group called New Contract. The group also goes by @Israelcrimeminister on social media, referencing prime minister Netanyahu as the ‘crime minister’. As per its Facebook page, the group is more than three years old and operates “as a civil protest and on a volunteer basis-in the streets, in the courts and social media.”

Netanyahu has labelled the protesters “Left-wing Anarchists”, while his son, Yair, called them “aliens.” The media in Israel is completely divided on the issue. Sections of the media with right-wing sympathies have been calling the protesters left-wing, while the liberal media terms it an “anti-Netanyahu protest.”

A large number of left and anti-occupation forces have in fact joined the protests since the last week of July, and are organizing chapters in various other cities.

What are the issues?

The demonstrators initially demanded the resignation of Netanyahu over the corruption charges against him. Netanyahu is facing trials in three different cases in court, related to misuse of power and corruption.

Protesters have also expressed anger over his government’s failure to handle the COVID-19 situation. Israel reopened its economy after prematurely declaring success in containing the infection in May. It was forced to reimpose the lockdown restrictions in July when numbers started rising again. The lockdowns resulted in massive unemployment, currently at over 20%. The stipend announced by the government for unemployed youth has been decried as insufficient to live a decent life.

With new groups joining the protests, the issues raised have become diversified. Minority Jewish groups, such as the Ethiopian Jews, who have faced systemic discrimination in Israel, joined the protests demanding justice. Anti-occupation forces led by the Joint Arab List are also participating in a big way.

Protesters have carried images of Iyad Hallaq, an autistic man killed by the occupation forces in May, and demanded justice for him and other victims of Israeli police violence in the occupied territories.

Some protesters have also raised banners against the proposed annexation of parts of the occupied Palestinian territories, in what is being seen as a continuation of the Black Flag protests organized in May. According to Meron Rapopart, editor of independent left-wing online magazine Local Call in Israel, “several Palestinians have delivered speeches at the demonstrations, there has been chanting against the occupation, and a group of protest leaders even met with Joint List head Ayman Odeh.” Odeh himself took part in the demonstration twice.

As Meron argues, “the protesters, even if they come from the establishment or higher classes, have opened up a wider democratic space” for forces which have never been part of mainstream demonstrations inside Israel until now.

Hadash’s Yavetz admits that it was initially not easy for the left and anti-occupation forces to join the protests. Years of suppression and vilification in Israel, as well as the predominantly Zionist nature of most of the protests, had prevented left activists and anti-Zionist, pro-Palestine groups from participating. Yavetz says that Zionist groups “do not acknowledge the full history of the state, and ignore what takes place just few kilometers away, in the name of the occupation and annexation”. This fact has restricted participation of progressive sections in various protests.

Nevertheless, Yavetz claims, “we [Hadash] are a movement intent on appealing to the masses, and so rather than ignore these growing protests, we arrived carrying our banner which read ‘democracy for all’ in both Hebrew and Arabic.” He adds, “together, we call for equal democratic rights for everyone under Israeli rule; we call for a just peace, an end to the occupation and for climate justice.”

Impact of the protests

Times of Israel reported a total of 32,000 demonstrators on Balfour street during the protest gathering on August 8. Similar protests were held simultaneously in several other venues and cities across the country.

In addition to bringing media attention to Netanyahu’s criminal trials and his government’s failures, the protests have revived the opposition in some ways. There is an “anti-Bibi bill” proposed in the Knesset by the opposition. If passed, the bill will force Netanyahu to resign.

The ruling coalition is already facing a possible split with its partner Blue and White over the budget.

Noting the high participation of young Israelis in the protests, Yavetz is optimistic that it will break some of their long-held beliefs cemented by “subsequent right-wing governments” which normalize the occupation, and will lead to a belief in possibilities for change.