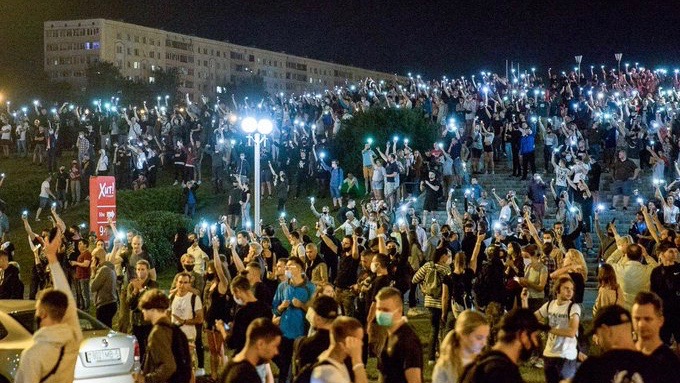 Alexander Lukashenko’s re-election for a sixth consecutive presidential term on August 9 has sparked major protests, dividing political groups and citizens in Belarus like never before. At least two people have lost their lives and over 200 have been wounded in police violence against the protesters calling for Lukashenko’s removal. A large number of protesters have taken to the streets seeking political change, despite massive state repression. At the same time, significant sections are worried about the outcome of the protests and the changes sought by the demonstrators, and are still on guard. The protests are also being viewed as an attempt by western forces to intervene and dismantle the system in Belarus, which has provided socio-economic security at a time when most of the so-called liberal democracies its neighborhood are suffering.

Though Lukashenko’s defeat was not predicted, there were speculations of a close fight with the opposition, which had drawn large crowds during the campaign. This was unlike past elections when Lukashenko never had a popular and serious rival. M. K. Bhadrakumar wrote before the elections in an article in Newsclick, “Lukashenko is very obviously unpopular…the electoral cycle appears to be genuinely contested this time.”

Lukashenko, in power since 1994, ultimately won the election with over 80% votes, as per official results, triggering speculations about foul play. His nearest rival, Svetlana Tikhanvoskaya, managed only around 10% of the votes.

Some voters have alleged that they were turned away from the polling booths or were otherwise not allowed to vote. Protests started even before the declaration of official results. The election commission in the country has meanwhile rubbished these allegations. Amid the protests, Tikhanvoskaya left the country claiming a threat to her life. She is currently staying in Lithuania where the government has given her and her children asylum.

In the four days since the beginning of the protests, state authorities have arrested more than 6,000 people. The United Nations High Commissioner for Human Rights, Michelle Bachelet, called the state response to the protests a “clear violation of international human rights standards”. Several European countries and the US are threatening to impose fresh sanctions.

Lukashenko has claimed that the protests have been incited by external elements. He said he would not let the situation in Belarus turn into another “Maidan”, referring to the 2014 uprising in Ukraine against Victor Yanukovch.

Many speculate the mismanagement of the COVID-19 situation by Lukashenko as the reason behind the outpouring of public anger, given that rigging has been part of Belarusian elections for a long time. A country of less than 10 million, Belarus has over 70,000 confirmed cases of COVID-19 with over 600 deaths.

Others have blamed the ongoing stagnation and economic problems for the protests. They are also being viewed as a revolt against the lack of freedom in the country, and people wanting to see a real change in the political leadership, particularly the youth.

With the emergence of a strong pro-EU constituency within Belarus, the protests may be the start of a serious political rift in a country which has firmly retained most of the Soviet style economic structure with universal welfare and social justice. The protests can also have an impact on the larger geostrategic calculations of NATO and the US vis-à-vis Belarus’ long-term ally Russia.

Though Belarus has retained a large part of the Soviet legacy – a state-owned economy, strong public sector, and near universal social security measures for its people – it has often been criticized by the liberal media as “the last surviving dictatorship in Europe”. In recent years, the country has seen a rise in support for economic and political changes along the lines of a liberal democracy.

The left is divided on the issue of Lukashenko’s re-election. The Communist Party of Belarus had reiterated its support for Lukashenko and accused the opposition candidates of seeking to impose a neoliberal and capitalist model in the country. On the other hand, another major left force, A Just World, alleges that the Lukashenko regime is guilty of suppressing all opposition voices, and had called for the boycott of the elections.

Such divisions run through the majority of the population, which was visible during the election campaigns when Tikhanvoskaya’s rallies saw massive crowds, a new development in Belarusian politics.

Geopolitics and threats to the republic

Russia, a long-term ally and the main economic partner of Belarus, has been pushing for greater integration between both countries on the basis of a unity deal signed in 1999. Lukashenko has been trying to delay integration talks fearing the rise of popular anti-Russia sentiments in the country, Bhadrakumar points out.

The US and NATO, still obsessed with the Cold War era “iron curtain” strategy, want to surround and isolate Russia by allying with the states around it. Lukashenko is crucial in this game as Belarus remains the last major Russian ally in the region. So far, the west has failed to win him over.

The current protests can offer the western powers a greater opportunity to repeat the 2014 Ukraine regime change. This would spell disaster for the people of Belarus by opening the doors to neoliberalism to dismantle the state-led economy, leaving the common citizens vulnerable to market forces.