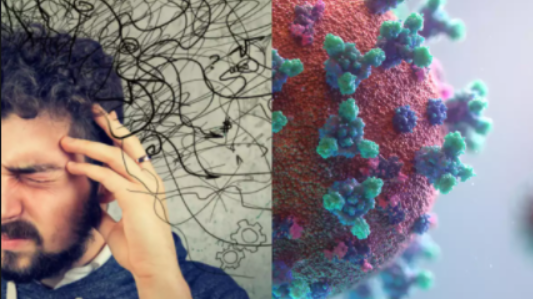 Even as the world is struggling to tide over COVID-19, information on various aspects of the viral disease is pouring in. The disease mainly leads to respiratory problem in patients who are critical. Aside from respiratory issues however, other complications are making themselves known, including brain function. However small in number, COVID-19-related brain complications suggest brain damage, which experts and researchers have been studying.

A study by the University College of London (UCL) reported that neurological problems ranging from encephalopathies (brain damage), psychosis and delirium could be observed in people that suffered from COVID-19. During psychosis, people see or hear something which is not present. One of the earliest known cases reported in the study is of a woman in her mid-50s who saw monkeys and lions in her house. The patient did not have a psychiatric history. Delirium is a condition where people get confused, agitated and disoriented. Patients in China were reported to have shown delirium and encephalopathies.

The correlation between behavioral symptoms and brain damage has not yet been fully studied. However, some early scientific reports point towards brain damage. As early as April, a group from Japan reported swelling and inflammation in the brain tissue. It was a case report about a patient who suffered seizures and convulsions. The report said that the RNA of SARS-CoV-2 – the virus which causes COVID-19 – was found in the CSF (Cerebrospinal fluid- the fluid in the brain) and in the spinal cord.

Another study from Italy reported a case that sparks greater concern. The Italian study reported that a COVID-19 patient developed a deterioration in the myelin layer in neurons. Myelin is a protein that coats areas through which neurons send signals to other neurons – called axon. The presence of myelin sheets on the axon of a neuron speeds up the signal and its degeneration slows down the signaling process. Myelin sheets are irreversibly damaged in severe neurological diseases like multiple sclerosis.

A UK study, published in Lancet in June, analyzed clinical details of 153 patients who had neurological complications due COVID-19. Researchers found that 62% of the patients had hampered blood supply to the brain (common in strokes) and haemorrhages, along with an altered mental states like confusion or unconsciousness in 31% patients. Notably, ten of the patients developed psychosis.

While the development of neurological disorders is evident, it cannot be said with certainty of how common it is. A recent study published in Lancet however throws some light on the percentage of COVID-19 patients who are likely to develop some or the other neurological complications.

The researchers reached their conclusion with the help of data from other coronaviruses. In the case of SARS, 0.04% of people developed symptoms which showed that their nervous system was affected; the same number was 0.2% for MERS. Given the COVID-19 numbers, it is estimated that the number of patients who may have developed neurological complications could be between 10,000 to 50,000. We need to remember that SARS and MERS did not affect people on the scale that COVID-19 has, and there is a dearth of data about both.

Virus or the immune system?

The uncertainty about the possible ways of developing neurological problems has kept scientists busy. Their two foremost concerns are whether the damage in the brain is caused by the virus itself, or if it is caused by a hyper-reactive immune system. Finding a definitive answer is necessary for developing clinical treatment.

A US study conducted at the La Jolla Institute says that the virus could be present in neurons. The researchers used human organoids (miniature and simplified versions of organs produced in vitro) and miniature clumps of brain tissue and found that the SARS-CoV-2 virus could kill some neurons and also weaken the synapses – the connection among neurons. The study was published in a pre-print server.

Another study conducted at the Yale School of Medicine also found similar results in research done on human organoids, the brains of mice and in post-mortem cases.

Post-mortems of 67 patients who died of COVID-19 showed the presence of the virus in the CSF. The researchers detected it through electron microscopy in a study released in May. However, the virus level was low and a consistent sample was not forthcoming.

Some studies however say that the virus could not be detected in the brain or the CSF, even with the help of RT-PCR (Real-time polymerase chain reaction) and the debate about whether the brain damage in some patients is due to an invasion of the virus or due to an immune response still rages.