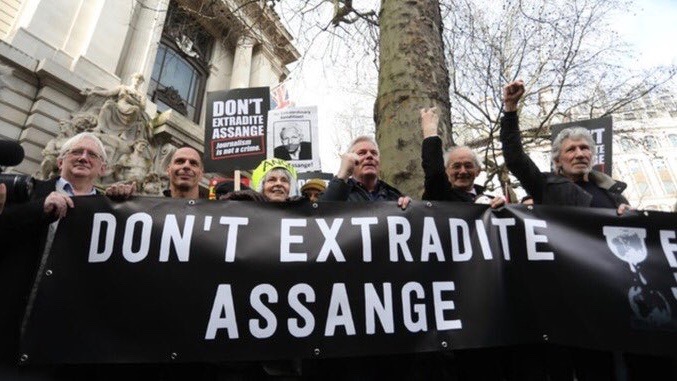 The ninth day of the Assange extradition trials had a marathon round of testimonies from New Zealander journalist Nicolas Hager, Khaled el Masri, who was abducted and tortured by the Central Intelligence Agency (CIA), and also journalist John Goetz. The day also included testimony from Carey Shenkman, a US journalist, who continued from his round of testifying and cross-questioning yesterday.

The day began with testimony from Hager, whose focus was to demonstrate that it is a necessity for investigative journalists working on wars and conflicts to gain access to classified information. Hager was one of the journalists who worked with Assange to publish the US embassy cable leaks for the New Zealand press.

As part of his testimony, Hager noted that Wikileaks took great caution when releasing classified documents, disputing the narrative of Assange’s actions having caused harm to individuals. “I found the WikiLeaks staff to be engaged in a careful and responsible process,” he said.

According to Hager, the Wikileaks team in December 2010 “responded to criticism of past releases and decided on a slower, more controlled process of release gradually country by country with a range of media partners from around the world.”

He also pointed out the importance of the releases made in the Afghan and Iraq War Logs and also the publication of diplomatic cables, pointing out it prompted the New Zealand government to review the role of its troops operating in these wars overseas.

Hager was followed by a brief testimony by Khaled el Masri. El Masri, a German citizen, was abducted by the CIA from the Macedonian border in 2004, and was abused, tortured and held in inhuman conditions for months. El Masri’s abduction turned out to be a result of a mistaken identity. In 2012, the European Court of Human Rights (ECHR) declared that the CIA agents were guilty of torturing him, making it the first such judicial pronouncement of the espionage agency’s actions.

El Masri read out a statement, through a translator, and credited the release of the diplomatic cables by Wikileaks between 2010 and 2011, as crucial to the outcome of his case in the ECHR. “WikiLeaks publications were relied on by the (ECHR) in obtaining the redress,” he said.

El Masri also added that “the exposure of what happened was necessary not just for myself but for law and justice worldwide.” Journalist John Goetz supported El Masri’s statement by adding he found it extremely difficult to report on El Masri’s case, to make sense of how the case progressed and why there was little to no repercussions on the perpetrators. He pointed out the pressure tactics that both the US and the CIA employed on sovereign nations and also el Masri to cover up the incident.

“The U.S. diplomatic cables revealed the extent of pressure brought upon the German authorities (and in parallel, relevant Spanish authorities) not to act upon the clear evidence of criminal acts by the USA even though by then exposed,” Goetz told the court. He also added, to reinforce el Masri’s point, that if it was not for Wikileaks publishing the leaks the whole case would “still be buried”.