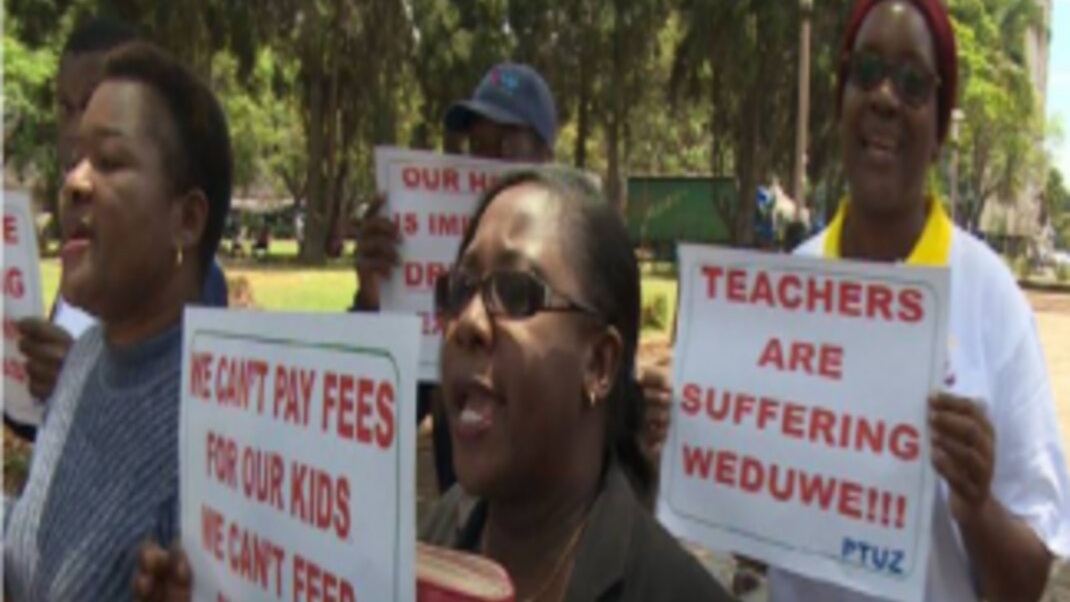 On Monday, September 21, the Zimbabwe Teachers’ Association (ZIMTA) said in a circular that its teachers will not be reporting to work once the schools reopen on September 28. ZIMTA is the largest teachers union in the country, representing 42,000 educators, all of whom were consulted before taking this decision.

As Zimbabwe’s official currency continues to lose value with each passing day, the average salary of a teacher has now been reduced to the equivalent of USD 30-35. At this level of earning, the union complains, teachers cannot afford to pay the school fees of their own children.

“[R]entals, medical insurance, funereal insurance and clothing are now out of the reach of educators,” ZIMTA’s circular states. Under such circumstances, teachers cannot afford to spend on traveling to school and back, and have declared incapacitation.

Unless they get a salary of USD 520 at purchasing power parity, “educators remain incapacitated and hence willing but unable to report to duty”, the circular states.

This was roughly the average earning of a teacher until October 2018, when RTGS was introduced as currency in which payments were made. Until then, the Zimbabwe government paid salaries in USD, which was adopted in 2009 after the value of the Zimbabwean Dollar was reduced next to nothing due to inflation.

Initially pegged to the USD at a 1:1 ratio, the value of RTGS began to slide rapidly vis-a-vis the USD. In February 2019, the government scrapped the mutli-currency system and mandated RTGS to be the only legal tender.

Now, more than 82 RTGS dollars exchange for a USD, as per the official exchange rate. In the black market, a USD can cost upto 100 RTGS dollars. As more and more Zimbabweans lose faith in this official currency, ZIMTA claims that “the economy has self dollarized and transport fares are now charged in USD and (South African) Rands in most routes”.

The union is also “concerned for the safety of teachers since most schools lack COVID-19 preparedness,” and is “disturbed by the unilateral pronouncement of opening of schools…without consultation of other stakeholders.”

ZIMTA demands that the WHO’s guidelines should be strictly implemented and that the teachers must be paid a COVID-19 allowance in addition to their salaries.

Nurses and doctors are among other civil servants who have faced financial incapacitation for the reason and have repeatedly gone on strikes.

Negotiations to prevent a strike by teachers as the schools reopen a month ahead of examinations were unsuccessful last week. “However, that should not close the door for negotiations. I am going to kickstart negotiations again this week,” said public service minister Paul Mavima.

(The story has been updated to reflect the correct monthly demand of the teachers which is USD 520 and not USD 50 as stated earlier. The error is regretted)