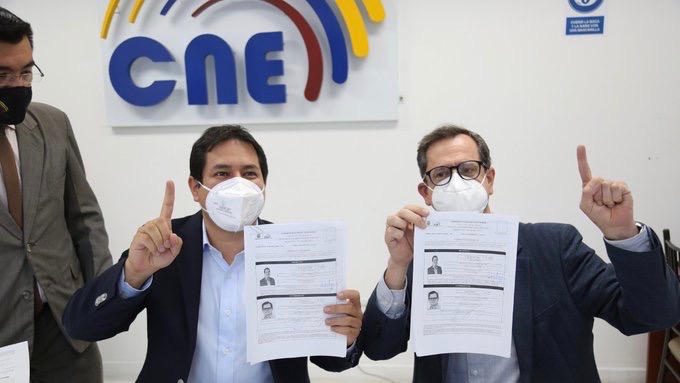 Ecuador’s progressive coalition, the Union for Hope (UNES), on October 2, successfully registered Andrés Arauz and Carlos Rabascall as candidates for presidency and vice-presidency, respectively, at the office of the National Electoral Council (CNE) for the general elections scheduled for February 7, 2021.

The UNES candidate for vice-presidency, journalist Carlos Rabascall, thanked the Ecuadorians for their support. “One more step on the road to recover the homeland, the dignity of the people and all the rights. This Friday, together with Andrés Arauz, we registered the UNES presidential ticket. Thanks to the real heroes: the citizens,” he tweeted.

After an intense week of uncertainty due to the possible disqualification of the entire UNES ticket and the massive national mobilizations carried out in defense of Arauz’s candidacy until a day before, on the night of September 30, the CNE accepted the legal appeal that allowed Arauz’s registration and granted him 48 hours to replace the person who will accompany him as a candidate for the vice presidency.

On September 22, the CNE’s president, Diana Atamaint, indicated that the CNE could disqualify the UNES previous presidential ticket formed by Andrés Arauz and former president Rafael Correa, due to the ratification of the 8-year prison sentence and the 25-year political ban for Correa in the “Bribes 2012-16” corruption case on September 7. Atamaint argued that Arauz’s candidacy was illegal as a consequence of having Correa as his running mate.

The announcements forced thousands of Ecuadorians from dozens of social movements and trade unions associated with the UNES to take the streets in defense of democracy. On September 24, a vehicle rally was held in the capital Quito to protest against the intention of the electoral authorities to eliminate the UNES presidential candidate from the presidential race. On September 29, a large number of citizens protested in Quito as well as other major cities, demanding that the electoral entity allow Arauz to participate with Rabascall in the upcoming elections.

The UNES elected Rabascall as Correa’s replacement and the new candidate for the vice-presidency on September 16, ten days after Correa was definitely disqualified from contesting in the elections as a result of the lawfare waged against him by the current president Lenin Moreno.

Various political leaders, including president Correa, celebrated the CNE’s decision to allow Arauz to run in the elections. “We did it! CNE could not eliminate the UNES presidential ticket. The situation in the country is so precarious that we must be “happy” for the compliance with what the law says. Thank you all. (…) We will win!,” wrote Correa in a tweet.