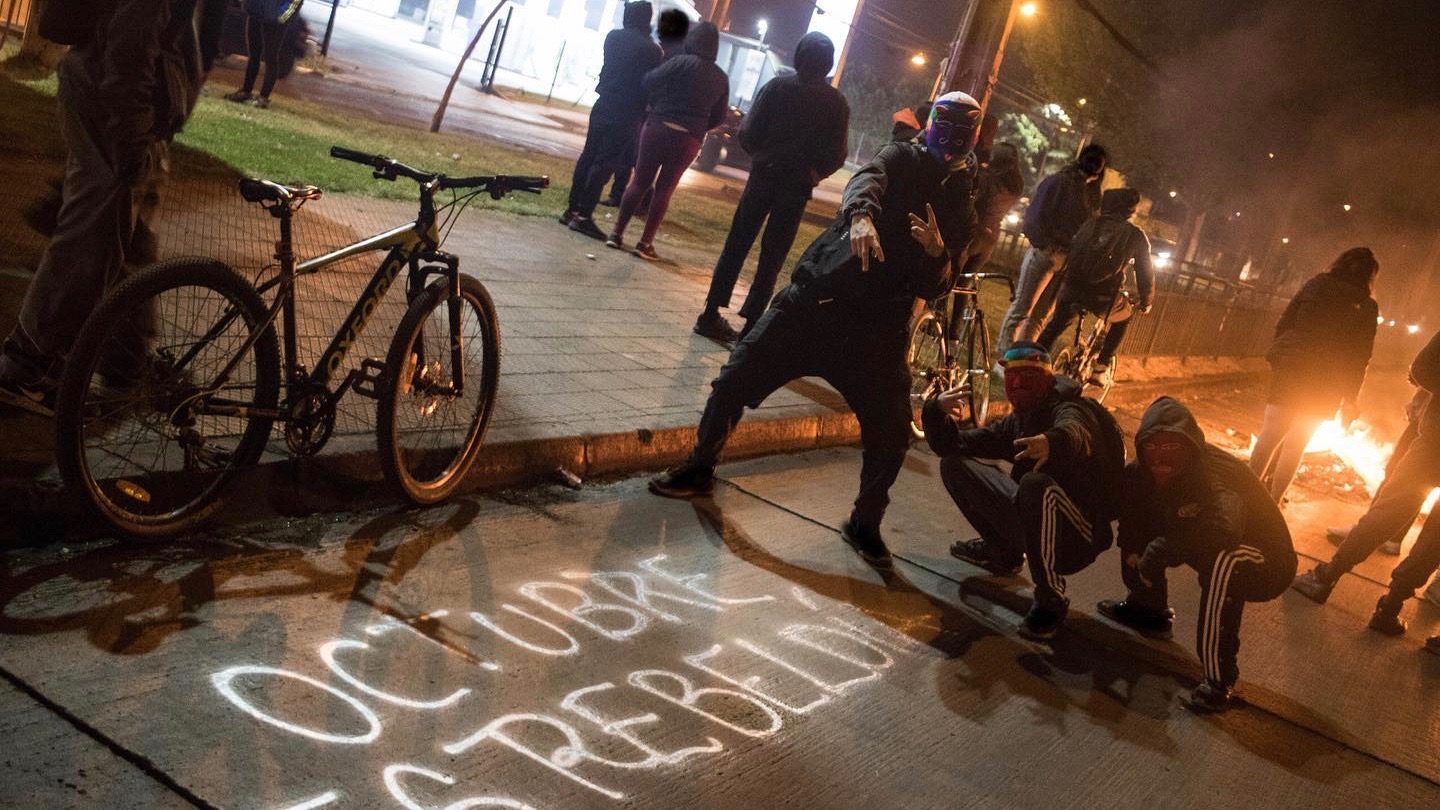 The protests against the Chilean national police force, the Carabineros of Chile, continued on October 5. Since October 3, citizens have been demonstrating across the country against police brutality and are demanding the resignation of Mario Rozas, the director general of the Carabineros, after the violent incident of October 2.

On October 2, a 16-year-old minor was pushed from the Pío Nono bridge into the Mapocho river in the capital city Santiago by a Carabineros official, when the police were repressing a social demonstration. The young protester, Antony Araya, who suffered head injuries and limb fractures due to falling from a height of more than seven meters, is stable but is still hospitalized.

#Chile | A 16 year old boy falls into the Mapocho River after being pushed by a Carabinero (Chilean police) from the Pio Nono bridge, in #Santiago.#PoliceBrutality pic.twitter.com/e5V7ODtUpj

On the afternoon of October 5, hundreds of Chileans demonstrated in the capital Santiago, concentrating at Plaza Baquedano, Plaza Los Héroes and Plaza Italia (Dignity Plaza). The traffic in the nearby roads and streets was blocked for hours due to the massive mobilizations.

Incidents of police repression were also registered across the city. Carabineros officials used water cannons and tear gas to disperse the crowd. In addition, at least 19 people were arrested for public disorder. However, despite the police violence, the protesters returned to the plazas and continued protesting till late evening.

The call for mobilizations was given by various social organizations on social media networks.

Immediately following the incident on October 2 when Antony Araya was thrown off the bridge by police officer Sebastián Zamora, police officials denied the act and went so far as to blame Araya for throwing himself off the bridge. This version was recanted after a video shared by Telesur depicting the incident, went viral on social networks. The carabineros were forced to acknowledge the participation of the policeman and remove him from his duties. After hours of investigation, the Justice also concluded that the Carabineros official pushed the boy, contrary to what the police authorities tried to disclose.

On Saturday, October 3, the Chilean Attorney General’s Office ordered the arrest and subsequent preventive detention of the 22-year-old policeman, Sebastián Zamora. The agent will be tried for the crime of attempted murder of the young boy.

October 5 was also marked by the explanations of the interior minister Víctor Pérez and the Carabineros head Mario Rozas, before the Citizen Security Commission of the Chamber of Deputies.

The same day, the UN office of Human Rights in South America requested the Chilean government to investigate the acts of repression that occurred on October 2.

In his statement, the UN representative, Jan Jarab, said that “it is necessary to investigate and, if appropriate, prosecute and punish not only the responsible individual agent of the Carabineros force directly involved, but also the possible responsibility of the commanders in charge of the operation.”

Jarab also expressed his concerns about the continuous hostile actions of the national police of Chile. “The continuous and unconditional support for the forces of order and security is of concern, because they are repeated behaviors. I call for the patterns to be identified and the causes that favor these behaviors to be analyzed,” he added.

The recent incident was the latest blow to the image of Carabineros. The police force has already been accused of committing grave human rights violations during the popular uprising which brought tens of thousands to the streets in October, November and December 2019.

For a year now, Rozas has been criticized for the brutal repression exercised by the law enforcement officials to suppress the social protests that shook the country in 2019. Several national and international human rights organizations have denounced the actions of the police authorities.

This new wave of protest serves as a prelude to the one year anniversary of the popular uprising in Chile. Additionally, it is quite significant as it takes place just three weeks before the constitutional plebiscite on October 25, in which the Chileans will decide whether or not to change the current constitution inherited from the dictatorship of General Augusto Pinochet (1973-1990).