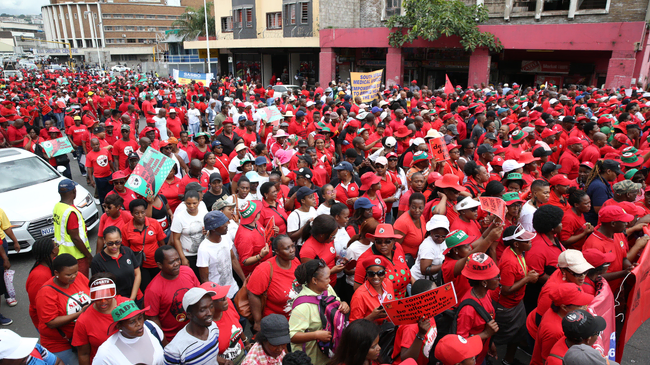 One of decade’s most significant general strikes in South Africa on Wednesday, October 7, is a mobilization of workers, not simply behind a limited set of livelihood-related demands. It is also a protest against neoliberal capitalism which they have come to increasingly find to be at the root of their livelihood crisis.

The call for the strike was given by the Congress of South African Trade Unions (COSATU) — a long-time ally of the ruling African National Congress (ANC). COSATU now characterizes the ANC as a “class-collaborationist” party as it has taken the side of the big capital against the working class in the “class-war long overdue.”

This position taken by the 1.8 million member-strong, largest trade union confederation makes the strike action more overtly political. It also raises the question of the future of the alliance between COSATU and the ANC.

Asked if such a political labor action by the COSATU vis-à-vis the ANC has a precedent, Sizwe Pamla, the union’s national spokesperson, told Peoples Dispatch that its country-wide strike action by public servants in 2007, in the build up to the ANC’s conference, was also “political” in a certain sense.

“Our position was that the neoliberal policy adopted by the ANC had led the country on a disastrous route. So we’d pushed for a change in leadership within the ANC,” Pamla said. “At that time, we had hope that the ANC, as an organization, could self-correct.”

“What is different this time is the realization that the ANC has betrayed the working class,” he added. No longer does the COSATU believe that the central problem is with ANC’s leadership, he explained. It is, he added, a realization that in the “class-war long overdue”, the ANC has taken the side of the big capital against the workers.

“We do sympathize”, he clarified, “with the ANC for being unable to implement radical land reforms.” The US, World Bank and the IMF will all impose a cost against such measures, and the ANC’s hesitation to face them is something the COSATU has been willing to reconcile with, he explained.

“But consciously reducing the corporate tax while increasing VAT, which burdens the working people,” and now, “blatantly stealing from the COVID-19 funds,” meant to protect the health and livelihood of the ordinary South Africans, has pushed COSATU to reconsider its assessment of the ANC.

The ruling party has shown itself to be reluctant to even limited measures to protect the workers’ basic livelihood, without having to pick a fight with the international capital, or challenging the system.

This, for COSATU, demonstrates whose side the ANC is on — a demonstration which has made the differences between COSATU and the ANC “extreme.”

Asked what this implies for the future of the alliance, Pamla said, “We don’t have the mandate to abandon the alliance that was affirmed in (our) 2017 conference. But in our next conference, we will debate the meaning of this alliance. That will be a central question.”

If the next conference should bring a shift in COSATU’s previous position with regards to ANC, one can expect a greater unity in the trade union movement. The nature and policies of the ANC has been a key question for the trade union movement with the country’s largest union   — the left-wing National Union of Metalworkers of South Africa (NUMSA) — leaving COSATU as it refused to continue to back the ANC.

Subsequently, NUMSA was instrumental in forming the South African Federation of Trade Unions (SAFTU) in 2017. While NUMSA, which has around 360,000 members, is not participating in the strike, a number of other unions affiliated to SAFTU are mobilizing.

The General Industrial Workers Union of South Africa (GIWUSA) was among the first of the SAFTU-affiliated trade unions which came out in favor of the strike.

“GIWUSA is encouraged that COSATU is becoming conscious of the class character of the ANC government and will not defer to it the hisfeattoric demands of the working class. GIWUSA hopes that this decisive action shall spark the beginning of a sustained collaboration between the two biggest federations in the country,” it said in its statement.

“We put forward the idea of rolling mass actions and SAFTU joining COSATU strike as a starting point, precisely because we believe in the unity of the working-class,” GIWUSA’s president, Mametlwe Sebe, told Peoples Dispatch.

“Whether COSATU leadership wills it or not, the shift in the attitude of their members has been happening…under hammer blows of the crisis and austerity that is carried out by the (ANC) government, (and) it is bound to accelerate.”

The union believes that the breaking of the alliance is a foregone conclusion because it is “not just the workers who are drawing the necessary conclusions about the alliance. The ANC itself is conducting a policy incompatible with the alliance, and sections of its leadership, especially people like the current Minister of Finance, Tito Mboweni, are speaking openly about “freeing” themselves from the restraints of the alliance partners,” says Sebe.