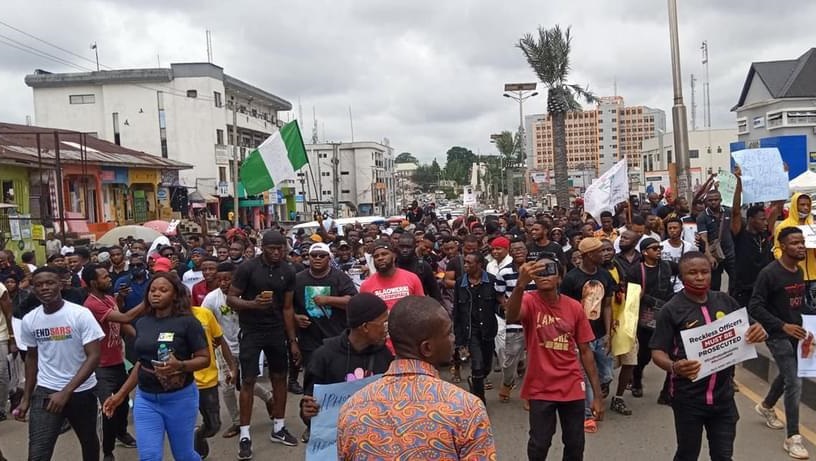 Thousands of Nigerians took to the streets in different parts of the country for the sixth consecutive day on October 13, Tuesday. The protesters are demanding the dissolution of the SARS units of the police, and an end to all forms of police brutality in the country. The government was forced to give in to popular demand and abolish SARS but protests continue demanding systemic reform.

The Federal Special Anti-Robbery Squad (SARS) was formed in Nigeria in 1992 to stop armed robberies. However, in the past decades, it had been accused of various crimes, including extra-judicial killings, torture, corruption and robberies.

The current round of protests started after video footage of SARS officers dragging and killing people went viral in early October. The initial protests were registered on social media as people shared their brutal experiences with SARS. Thousands of social media pages with names “EndSARS” have been created. While the initial protests were small, the police responded with the use of heavy force to suppress the protesters in capital Abuja and other cities. Teargas and live fire was used against the protesters at several places.

At least ten people have been reportedly killed in the police action in the last six days. This has increased popular anger against the police.

Several well-known personalities, including British-Nigerian actor John Boyega and singer Davido, have come out in support of the protests. Many have compared the protests to the recent round of Black Lives Matter protests in the US.

Amidst it all. We must not forget the reasons we are protesting, we must not forget the peaceful manner of the protests and we must most certainly not back down until our demands are met! Sars ending is a great start but the task is far from completed! pic.twitter.com/DdlYqca49x

Under pressure, the government announced the dissolution of SARS on October 11. While making the announcement, president Muhammadu Buhari also announced extensive police reforms in the country. However, the protests have not let up due to widespread mistrust among the people. Protesters argue that the government has promised similar reforms on several occasions in the past as well. They have demanded a comprehensive review and investigation into the working of the entire police system, as well as punishment for those involved in criminal activity against the people.

The apprehensions of the protesters were justified on Tuesday when the police announced the creation of an alternative Special Weapons and Tactics Unit (SWAT). Protesters called it a replacement of SARS and an attempt to rehabilitate the accused police officers.