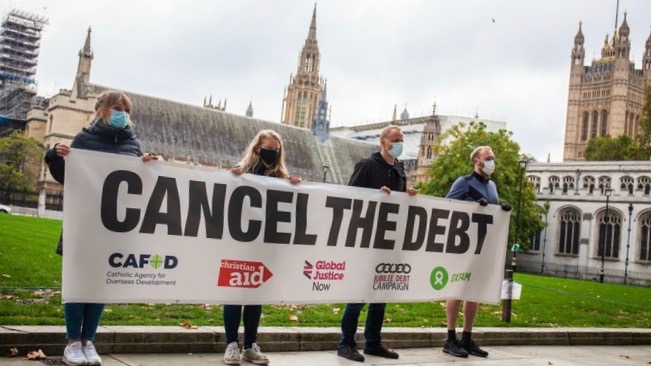 Various anti-debt groups and activists have criticized the G20 announcement of a mere six-month extension in debt payment suspension for the poorest countries. The decision was announced on October 14, Wednesday, after a virtual meeting of G20 finance ministers and central bank officials.

The decision to extend the debt payment suspension was taken to enable the debtor countries to use their resources to focus on the health and economic crisis caused by the COVID-19 pandemic.

G20 and the World Bank jointly initiated the Debt Service Suspension Initiative in April to provide relief to debtors, mostly the poor countries, amid the coronavirus-induced lockdowns. It suspended debt repayment until the end of the year. According to the announcement on Wednesday, the countries can now avoid repaying their external debts until June 2021.

So far, 43 out of the 73 countries have used the facility. G20 claimed that the new extension would relieve USD 14 billion debt of poorer countries, which they can use to focus on health care and provide a stimulus package for domestic recovery.

However, critics have pointed out the severe conditionalities for securing debt suspension as the reason why many of the poorer countries have not used it yet. They also argue that absence of private creditors from the debt repayment scheme has reduced the benefit to poor countries.

Several international aid groups such as CIVICUS have expressed their disappointment over the decision to extend the debt repayment date only by six months. They have been demanding an extension of at least a year. Groups argue that many countries are forced to spend more on debt repayment than on health and other life saving services, and should not be forced to part with their resources at this critical juncture.

Several other groups such as Tricontinental: Institute of Social Research, Asian Peoples Movement on Debt and Development and Oxfam GB, among others, have called for a complete cancellation of all external debt.

What we owe rich countries is nothing compared to what THEY OWE US. Their unabated extraction of resources in the Global South is causing the health, economic, and environmental crises we're facing. Hence, our demand to #CancelTheDebt comes w/ a demand to #PayYourClimateDebt now! pic.twitter.com/1mh5TEDJZ7

Noted economist Prabhat Patnaik had previously argued that, “this is not just a postponement of the debt crisis, and that too a very partial one at that, but a postponement that would actually make the burden of the crisis even heavier in the future. The only sensible course for the G-20 to have adopted would have been to cancel the external debt of the poorest 77 countries altogether, which would not even have been a particularly heavy burden on the G-20.”

We need a dedicated debt relief and cancellation process for all developing countries in the wake of the Covid-19 crisis rather than the piecemeal approach of short term debt servicing suspension that the #G20 has adopted #CancelTheDebt pic.twitter.com/TvhJmmjLEL

A group of intellectuals and political leaders from across the world, including former Brazilian president Dilma Rousseff and Kerala State finance minister Thomas Isaac, had signed a statement in July saying that external debt has “ballooned over the past several decades,” leaving “most developing countries in an unsustainable financial situation.” For these countries, “defaults and debt adjustments seem to be a permanent fixture” for reasons “that are often external to the fundamentals of their economies.”

The statement added that “debt suspension or postponement does not provide a foundation for the necessary development” but “merely puts off the reckoning.” Cancellation of all external debt is the only way forward for all countries.