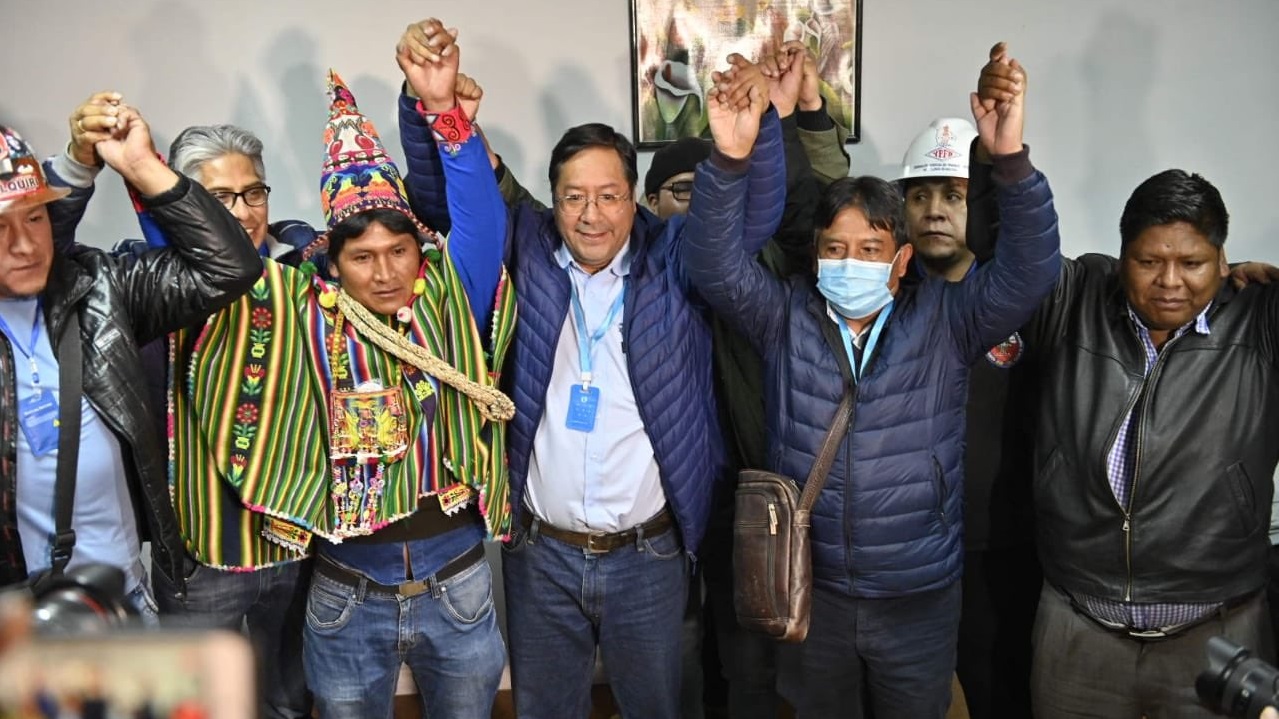 Luis Arce and David Choquehuanca (fourth and fifth from left) shortly after the announcement of the Unitel-Ciesmori estimate.

“We have regained democracy and hope,” said Luis Arce of the Movement Towards Socialism (MAS), as both a private pollster and the president of Bolivia’s coup regime confirmed that the MAS ticket was set to win the presidential elections in the first round in Bolivia.

According to the Unitel-Ciesmori estimate, Luis Arce was shown as winning 52.4% of the vote while his nearest rival Carlos Mesa was shown as obtaining 31.5% of the vote in the elections held on Sunday, October 18.

Shortly after, the president of the coup regime, Jeanine Añez, in a tweet said that available information pointed to the victory of the Luis Arce-David Choquehuanca ticket.

According to Bolivia’s election laws, in order for a candidate to win in the first round, they must either secure more than 50% of the vote or more than 40% with a 10% lead over their nearest rival. The final results are awaited as the counting is proceeding.

Prior to the release of the Unitel-Ciesmori estimate, former president Evo Morales of the MAS, who was overthrown in a coup in November 2019, said that the party’s own internal tabulation mechanism showed the party had won the presidential election, as well as both houses of parliament. Luis Arce was the minister of economy and public finance in the Evo Morales administration. After the estimate by the pollster, Morales tweeted that the will of the people had won and that “we are going to return dignity and freedom to the people.”

The election on Sunday was the first since the violent coup which was followed by massive persecution of the MAS, its members and sympathizers. Voting in Sunday’s election was largely peaceful and was marked by a high turnout. In the days preceding the elections, there was a huge amount of uncertainty about whether a free and fair election would be permitted and if its results would be recognized. On the day before the elections, the DIREPRE preliminary elections system was suspended and an armed mobilization had taken place outside La Paz. After polling closed, there was some confusion as the Unitel-Ciesmori estimate was delayed and there was a marked lack of transparency. The election observation delegation CODEPINK spoke to the media expressing these concerns and calling for greater clarity and openness in the process.

The information regarding the results was greeted with celebration by Bolivians and progressive sections throughout the world. Venezuelan president Nicolás Maduro tweeted that the people of Bolivia had, by their votes, defeated the coup that overthrew Evo Morales.

Former president of Honduras, Manuel Zelaya, who was himself overthrown in a coup in 2009, congratulated the people of Bolivia for beating the coup and the fraud.