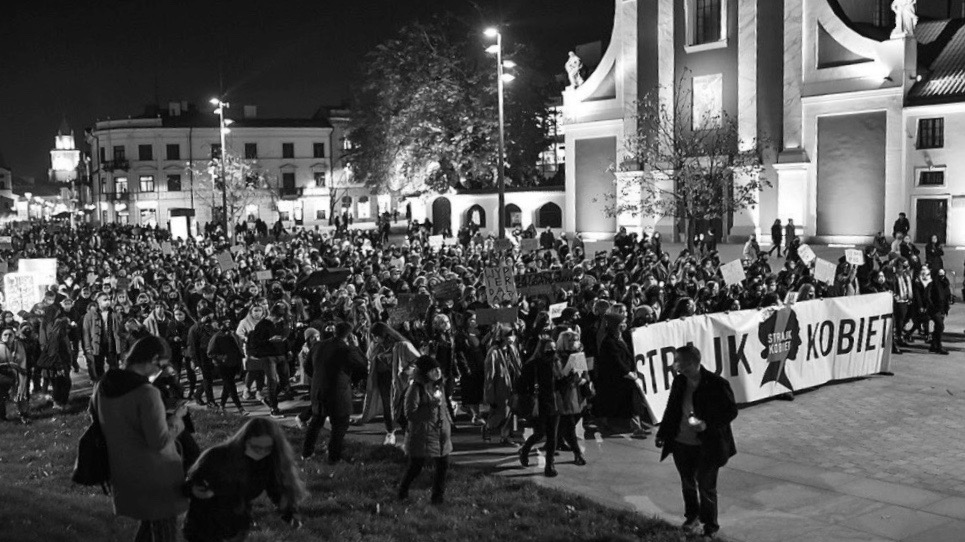 The National Women Strike initiated massive protests across Poland against the ban on abortions. (Photo: via placzabaw.nef)

Women’s rights groups and other progressive sections in Poland have been protesting since October 22, Thursday, following a controversial judgement by the country’s constitutional court banning abortions in case of fetal defects. The National Women Strike in Poland condemned the ruling as a war against women and started protests across the country. Leftist groups, including Lewica Razem, also registered a strong protest against the anti-woman judgement given by the constitutional court.

According to reports, thousands marched across Poland on Saturday, marking the third consecutive day of protests. Major protests have taken place in the cities of Warsaw, Gdańsk, Białystok, Wrocław, Szczecin, Katowice, etc. Critics claim that the judgement given by the court on Thursday is another step towards transforming Poland as per the whims of the conservative sections in the country led by the right-wing elements of the Catholic Church and the incumbent Law & Justice (PiS) party.

Poland remains today as one of the most conservative countries in Europe, especially with regard to abortion rights. Since 1993, abortions are only permitted in instances of rape and incest, and where pregnancy poses a risk to the woman’s health and fetal defects. The new court ruling has repealed the provision for abortion in case of fetal defects.

Following ruling on Thursday, the National Women Strike said that Catholic fundamentalists have achieved the ban on abortions through a biased court, the constitutionality of which has already been challenged.

Lewica Razem stated, “right-wing fanatics have done their job today. They will force women to give birth to deformed fetuses. They will force mothers and fathers to watch these children die in pain. However, we will not [allow] the humiliation of Polish citizens. We will never agree that a woman is left alone. We will never agree to be humiliated by her own homeland.”

The  Communist Party of Poland (KPP) stated, “we believe that this body controlled by the ruling party, mastered by manipulation by PiS nominations, tries to impose religious bans on the entire society, which do not allow the current state of medical knowledge and modern ethics.”

Since 2015, the right-wing Law & Justice (PiS) party in power in Poland has implemented many conservative policies by abusing democratic institutions and subjugating the judiciary. PiS has consolidated its conservative base by running a vicious hate campaign against the LGBT community, women’s rights, communists, and others. In 2016, PiS introduced a bill in the parliament intended to ban abortions. But the parliament was forced to vote down the bill following the Polish Black protests, which saw active participation by the Razem party, women’s groups, and other progressive sections. PiS’ attempts to subjugate the judiciary in Poland through a series of controversial judicial reforms also courted widespread criticism.