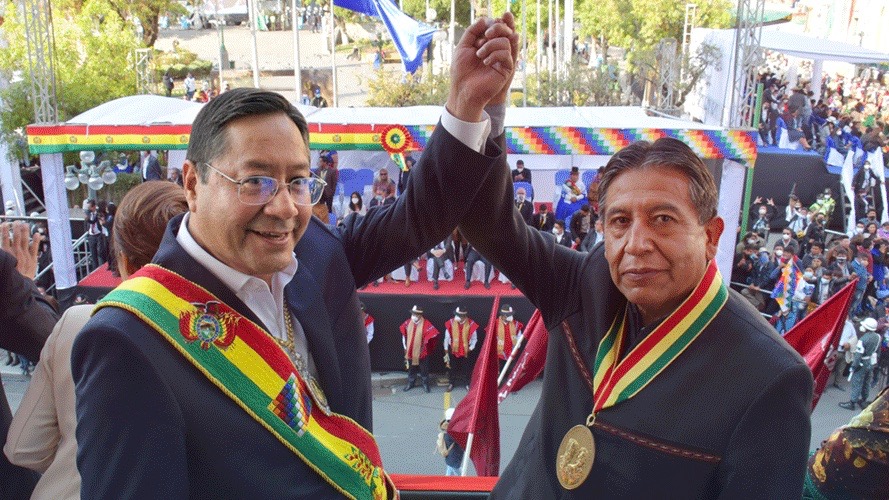 Luis Arce and David Choquehuanca of the Movement Towards Socialism (MAS) were sworn in as the president and the vice-president of the Plurinational State of Bolivia on November 8.

Luis Arce of the Movement Towards Socialism (MAS) was sworn in as the president of the Plurinational State of Bolivia on November 8. The same day, David Choquehuanca also took office as the vice president of the Latin American country. Their inauguration marked the return of democracy in Bolivia almost a year after the coup d’état of November 2019. The MAS presidential ticket won a landslide victory in the general elections of October 18.

The president of the senate, Andrónico Rodríguez, first swore in Choquehuanca, then Choquehuanca swore in Arce and presented him with the presidential sash and medal. The investiture of the Arce and Choquehuanca was held at the headquarters of the Plurinational Legislative Assembly and was attended by delegations from some 40 countries from across the globe.

Ahead of the investiture, thousands of members of various social movements and trade unions from across the country came to the capital, La Paz, to celebrate the popular victory and the return of democracy. The representatives of various Indigenous organizations performed ancestral ceremonies prior to the formal swearing in ceremony. At the Plaza Murillo, where the presidential palace and the Bolivian parliament are located, the Indigenous spiritual leaders made a traditional offering to Mother Earth, asking her to give strength to the new rulers. The act concluded with a civic-military parade.

Arce and Choquehuanca promise to recover the homeland

In his first speech as president, Arce promised to rebuild Bolivia and recover the economy, which has been destroyed by the de-facto government in the past one year. “The de-facto government leaves an economy with figures that were not even seen in one of the worst crises that Bolivia suffered under the UDP (Democratic and Popular Unity) government in the eighties of the last century. Unemployment, poverty and inequalities have increased,” said Arce. “Today we are here, to send a message of hope to all the nations that make up Bolivia, to those brave women and men who go out every day to fight to overcome this difficult situation,” he added.

Meanwhile, during his inauguration speech, Choquehuanca called to “overcome division, hatred, racism and discrimination among compatriots,” with “no more persecution of freedom of expression and no more judicialization of politics.” He highlighted that “the new period that we are entering into means listening to the people, healing wounds and looking at each other with respect” He stressed that “we must recover the homeland, dream together, build brotherhood, harmony, integration, hope, to guarantee peace and happiness for the new generations, only in this way can we live well and govern ourselves better.”

Political and social leaders from across the world congratulated Arce and Choquehuanca on assuming office.

Former president Evo Morales, who was ousted in the violent right-wing coup last year, was the first to congratulate the new leaders of the country. “Many congratulations to our president Luis Arce and vice president David Choquehuanca. Together with the people, we will take care of the government, our transformation process, we will work for unity and we will emerge from the economic crisis for the sake of future generations. Long live Bolivia!,” wrote Morales in a tweet, who is returning to Bolivia today, on November 9, after living as a political refugee in the neighboring country Argentina for almost 11 months.

Venezuelan president Nicolás Maduro also congratulated Acre and Choquehuanca. “Hope and democracy returned to Bolivia with president Luis Arce and vice-president David Choquehuanca. Brothers, from Venezuela we wish you and the Bolivian people the greatest success in this new stage. It is a festivity for the entire of the Great Homeland,” wrote Maduro in a tweet.

Likewise, Cuban foreign minister Bruno Rodríguez also sent his felicitations. “We welcome the inauguration of Bolivia’s president-elect Luis Arce and vice-president David Choquehuanca. For not being able to attend for reasons beyond our control, we send our solidarity to the brother Bolivian nation and support for the government elected by the people’s will,” tweeted Rodríguez.

The member countries of the Bolivarian Alliance for the Peoples of Our America – People’s Trade Treaty (ALBA-TCP) also congratulated the people and the new government of Bolivia. Through an official statement, the regional entity congratulated “the Bolivian people, who today are the owner of their destiny with greater independence and sovereignty, a triumph that honors the historical struggles of yesterday and today of the Indigenous people and the Liberators of Our America.”