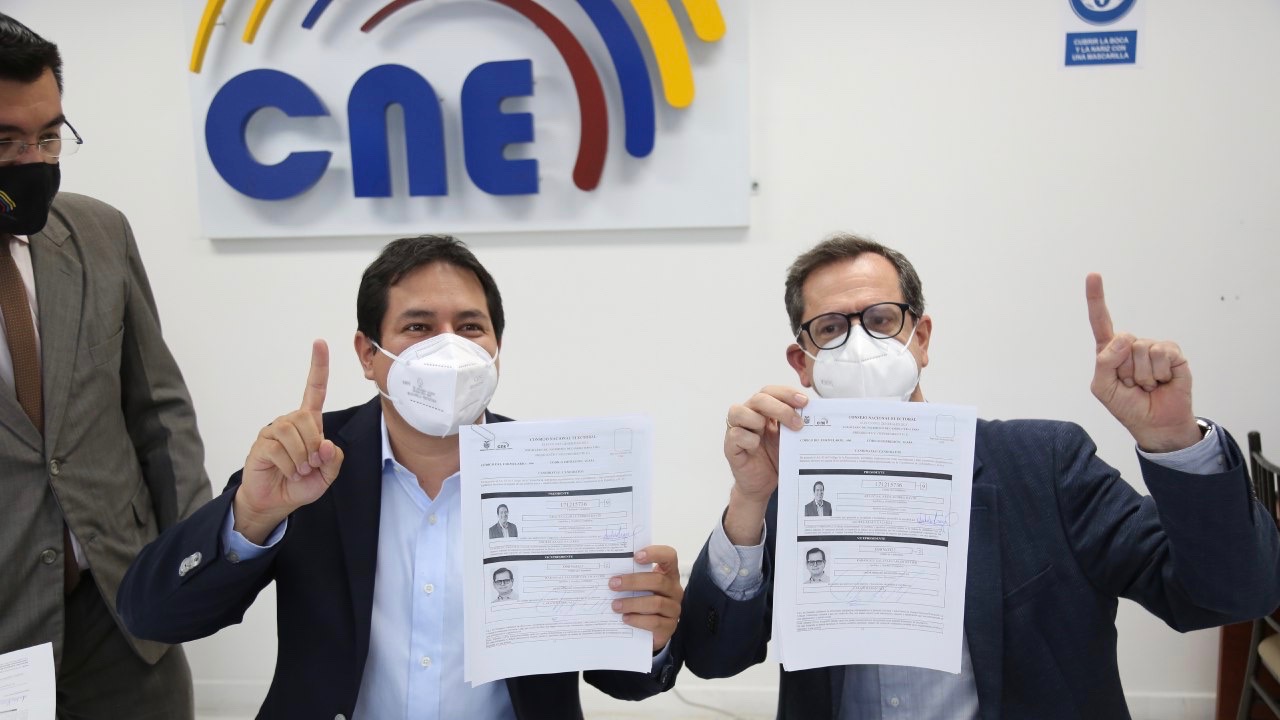 Ecuador’s National Electoral Council (CNE), on December 8, approved the presidential ticket, with Andrés Arauz and Carlos Rabascall, of the progressive Union for Hope (UNES) alliance for the 2021 general elections.

The president of the CNE, Diana Atamaint, reported that the CNE had received a certification on the qualification of the UNES presidential ticket by the Electoral Dispute Tribunal (TCE) and that the duo was enabled to compete in the elections.

The TCE’s certification implies that there are no pending appeals against the candidates of the UNES alliance and that the court has resolved to dismiss and disqualify all the pending complaints filed against the alliance by right-wing parties to prevent the participation of its candidates. In total, five different appeals were presented to challenge the candidacy of Arauz and Rabascall, who according to various opinion polls are leading the voting intention.

Through a tweet, Arauz thanked the people for their support in the face of political persecution. “#ThePresidentialTicketOfHope will be on the ballot on #7thFebruary. Thanks to everyone who was vigilant and mobilized! Thanks for international solidarity! The Ecuadorian people have enforced their right to choose in democracy,” wrote Arauz.

The UNES is a coalition of left-wing political parties such as Fuerza Compromiso Social or Social Commitment Force, Centro Democrático or Democratic Center as well as hundreds of social organizations, trade unions, student, teacher, Indigenous, peasant, women and LGBTQI movements, among others. It is led by former President Rafael Correa.

The UNES registered former economic minister Andrés Arauz and journalist Carlos Rabascall as candidates for presidency and vice-presidency, respectively, on October 2, after fighting their possible disqualification in the streets.

Rabascall replaced Correa as the new vice-presidential candidate on September 16, after Correa was definitely disqualified from contesting in the elections as a result of the lawfare waged against him by the current president Lenín Moreno.

Former president Correa also commented on the CNE’s decision and said that “it is the beginning of the end of the nightmare.” He added that he is “not claiming victory”, but stressed that the opposition “could not eliminate us.” Likewise, Correa denounced that “now they will try to delay the elections” and “force a second round.”

Last week, Aráuz also denounced that Moreno’s government was seeking to postpone the elections so that the elite groups allied to his administration could complete their privatization program for various public companies.

In September, Moreno’s administration began privatizing the state-owned oil company, Esmeraldas Refinery and the electricity company, Electricity Corporation of Ecuador (CELEC), among others, which were recovered and strengthened during Correa’s government (2007-2017).

The general elections in Ecuador are scheduled for February 7, 2021. There are 16 presidential candidates contesting in the elections. According to the electoral calendar, the campaign will take place between December 31 and February 4.

In order to win in the first round, a candidate needs to secure more than 50% of the votes or more than 40% of the votes with a 10% lead over the runner-up. In case, if no candidate wins a simple majority, the run-off will be held on April 11.