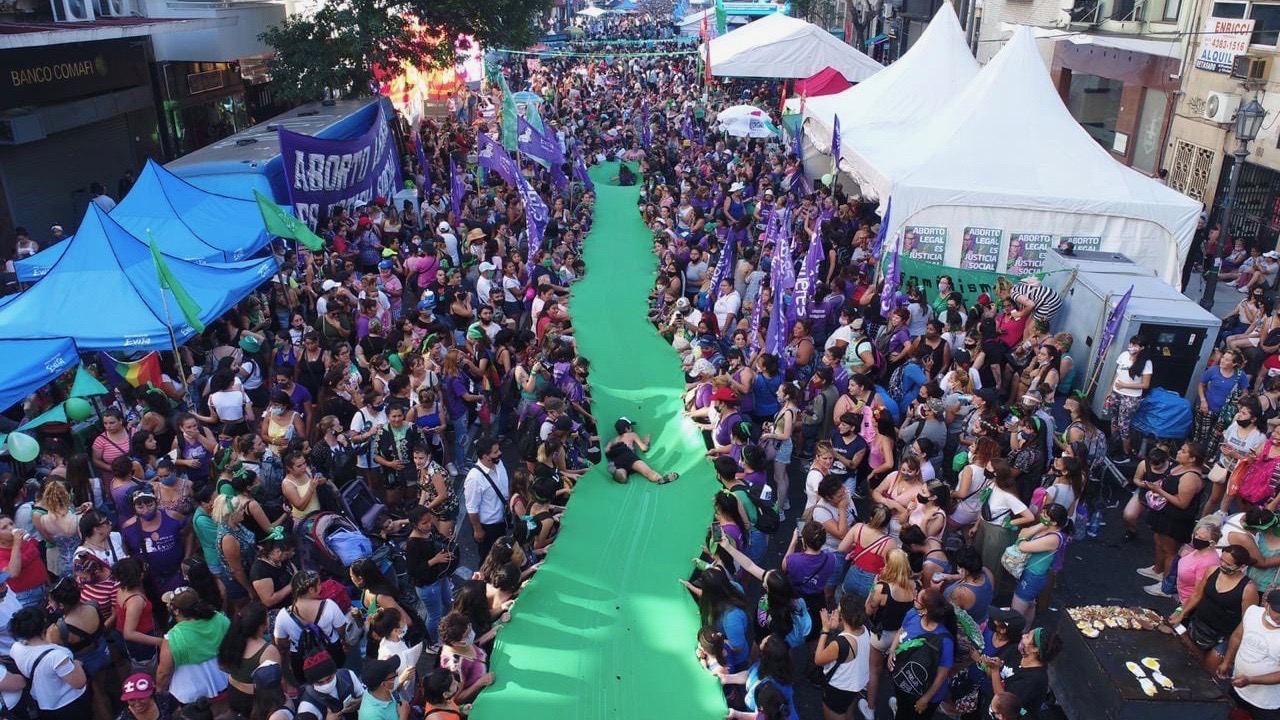 Thousands of women and LGBTQ community members from across Argentina are demanding that the legislators vote in favor of the IVE bill that decriminalizes and legalizes abortion in the country. Photo: National Campaign for the Right to Legal, Safe, and Free Abortion

This December 10 & 11, the Chamber of Deputies of the National Congress of Argentina will debate and vote on the Voluntary Termination of Pregnancy (IVE) bill. Argentine President Alberto Fernández sent the said bill to the Congress for consideration on November 17. The lower house of the parliament began discussing it on December 1. Since then, feminists, women, girls, adolescents and other people with the ability to gestate have been organizing throughout the country to urge the legislators to vote in favor of the bill that decriminalizes and legalizes abortion in Argentina.

The National Campaign for the Right to Legal, Safe, and Free Abortion has called to mobilize on December 10 & 11 and hold a vigil in the vicinity of the National Congress in the capital Buenos Aires and in the plazas in different cities of the country. The National Campaign is one of the most important women’s organizations. It has been leading women’s struggle for the right to autonomy over their bodies and their lives for decades.

The people have been gathered outside the National Congress and in the central plazas in other cities since 10 am on December 10, when the debate began in Congress, and they will participate in the vigil until December 11, when the bill will be voted on.

On December 9, thousands of citizens took part in a “tuitazo” (a campaign on Twitter) and flooded the social network with #AbortoLegal2020 or #lLegalAbortion2020 to express their support for the integral right.

“We hope to be more than a million as in 2018, because we achieve our rights in the streets. The pressure of the entire feminist movement is fundamental for the best law to guarantee us a dignified life, so that we can decide freely for our bodies,” said the National Campaign in a statement.

In June 2018, during the right-wing government of President Mauricio Macri, Argentina witnessed a massive mobilization outside the Congress, while the IVE bill was being debated. At that time, the Chamber of Deputies approved the bill. However, in August 2018, the Senate rejected it.

This year, with the progressive government of Frente de Todos in power, the feminist movements are hopeful about achieving the abortion rights.

The new IVE bill presented by Fernández’s administration establishes a gestation limit of fourteen weeks (inclusive) to carry out the procedure. After fourteen weeks, a pregnant person can only access an abortion if her life is in danger or if the pregnancy is the product of rape. The bill also established that public and private health professionals must respond to this request within a maximum period of ten days.

Last week, on December 4, thousands of women, feminist activists and LGBTQ community members mobilized across Argentina and held “pañuelazo” or a march with green scarves, which represents the feminist struggle for legal abortion, in support of the IVE bill.