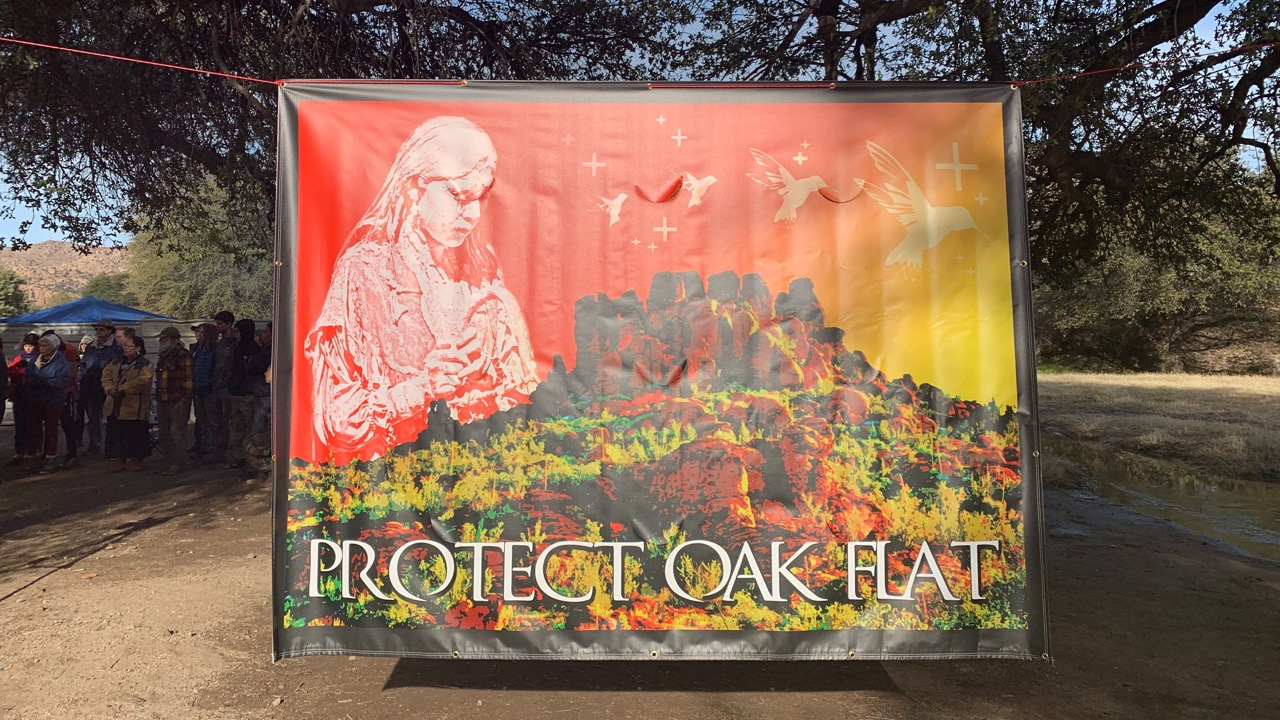 A protest banner raised by indigenous protesters near the site of the proposed mine. Photo by Gabriella Olivera/ Cronkite News

An indigenous group in the United States has taken their long-standing battle against a copper mine to court. On Tuesday, January 12, the Apache Stronghold filed a lawsuit at a federal court to stop attempts to fast track approval for a copper mine in Arizona by the Donald Trump administration. The lawsuit filed at the US District Court in Arizona comes just days ahead of the scheduled release of an environmental review by the Tonto National Forest on Friday, January 15.

Indigenous leaders in Arizona have alleged that the Trump administration is planning to grant the final environmental impact survey (EIS) for earmarking nearly 10 square kilometers of land, or 2,400 acres, in the Oak Flat. The land, known by the Apache as Chi’chil Bildagoteel, which falls under the Tonto National Forest, is held sacred by the Apache tribes in Arizona.

Wendsler Nosie Sr., former chairman of the San Carlos Apache and Apache Stronghold leader, in a statement released on the same day, said that “Oak Flat is holy and sacred. Chi’chil Bildagoteel is central to our traditional religion and identity as Apache people.”

“Giving away our sacred land by the US Government for destruction by a foreign mining company destroys our ability to practice our religion. It violates our First Amendment right to the free exercise of our religion protected by the Constitution,” added Nosie Sr.

The lawsuit argued, among other things, that the United States Forest Services (USFS), the federal body which administers Tonto National Forest, has not given them enough notice to prepare a response on the project and that the land in question belongs to the Apache under the 1852 Treaty signed between the tribe and the US.

The land parcel is expected to be swapped for a copper mine run by Resolution Copper, a joint venture of two Australian mining corporations, Rio Tinto and the BHP Group. Rio Tinto was involved in a major controversy earlier this year for destroying a 46,000-year-old aboriginal site for mine expansion in Australia.

The government and Rio Tinto have denied allegations of fast-forwarding approval for the mine. However, government documents seem to suggest otherwise. In September, the date for the completion of the final EIS for the site was moved ahead by a whole year from December 2021 to December 2020. It is this report that will be released on Friday.

The Trump administration which will finish its tenure on January 19, has been pushing for opening of copper mines in Oak Flat. The copper reserves fall largely under the 7,000 acres of largely indigenous lands and sacred sites. It has been sought after by mining corporations ever since the discovery of the ores in 1995. Mining ventures were made possible in December 2014 through a legislative rider, which was included into the 2015 defense spending bill by the late Republican senator John McCain, who received significant campaign donations from Rio Tinto.

Indigenous activists and environmental groups have consistently fought against ventures on the land. In a call for action released last month, the Apache Stronghold had stated that if “the environmental review is completed before Trump leaves office, the tribes may be unable to stop the mine.”

In a statement attached with the lawsuit, Nosie Sr. echoed concerns of attempts to erase indigenous rights to the land. “What was once gunpowder and disease is now replaced with bureaucratic negligence and mythologized past that treats us, as Native people, as something invisible or gone,” he said. “We are not.”