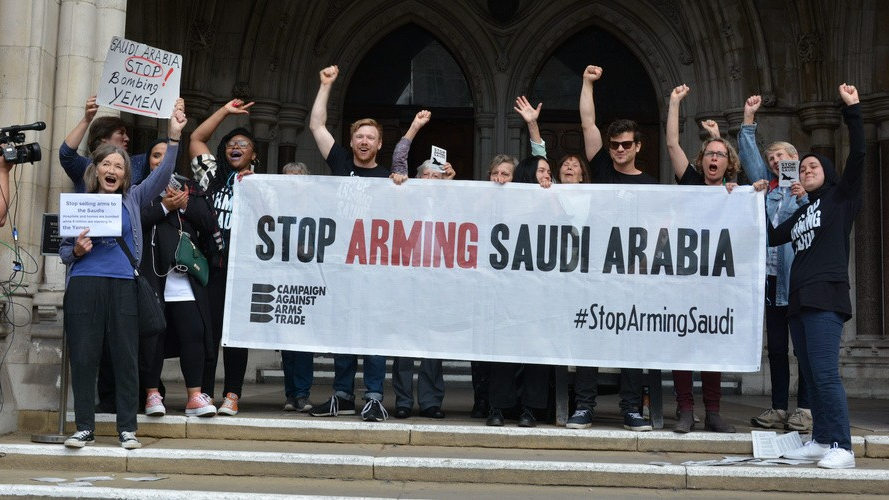 Following the US decision on arms sales, the shadow foreign secretary Lisa Nandy wrote on Twitter that “In supplying arms to Saudi Arabia the UK Government is increasingly isolated. We must end arms sales to Saudi and stop sustaining the appalling conflict in Yemen.”

Even some Conservative Party MPs joined the chorus and raised the issue of arms sales. Raising the question in the House of Commons, Tobias Ellwood, the conservative chair of the defense committee, demanded that the government follow its “closest allies” and suspend sale of arms to Saudi Arabia. He underlined that the move is necessary for peace talks in Yemen.

My URGENT QUESTION to the Gov:

👉Let’s join the US in ending arms exports connected to Yemen.

👉 Host a Yemen Summit to explore political solutions for peace.

👉 Be ready to offer UK forces for any UN peacekeeping mission.

👉 Reverse the cuts to our aid budget. pic.twitter.com/Rvt2eQLoc4

On January 25, Stop the War Coalition launched a signature campaign and an early day motion demanding that the prime minister Boris Johnson suspends arms sales to Saudi Arabia. So far, 20 MPs from across party lines have signed the petition including Independent MP Jeremy Corbin, Caroline Lucas of the Green Party, Grahame Morris of the Labour Party and a couple of MPs from the Scottish National Party. The Coalition also launched a campaign on February 5 asking people to write to their MPs to raise the issue in the parliament. Similar campaigns were also launched by other anti-war groups such as the Campaign Against Arms Trade (CAAT).

The Saudi-led attacks on #Yemen are carried out with weapons supplied by the US and the UK, and sustained by their ongoing military support. https://t.co/qX6jFLxwDP
As the US reconsiders its support, please demand the UK does the same: https://t.co/lhrLGLGoXC#StopArmingSaudi

The government, however, has remained defiant so far.  The minister of state for Middle East and North Africa, James Cleverly, said on Monday that though he had noted the US decision, the UK arms sales to Saudi Arabia are different and will not be stopped. He also asserted that UK arms are sold after careful examination to prevent their misuse.

The UK had suspended arms sales to Saudi Arabia in 2019 after a court order. However, it was soon resumed. The UK is one of the leading arms suppliers to the Saudi-backed coalition which has waged war in Yemen since 2015. SIPRI estimates that last year the UK was the second largest arm supplier (13 percent) to Saudi Arabia after the US (73 percent). Between 2015 and 2019, the UK sold weapons worth more than USD 7.4 billion to Saudi Arabia and the country has been the destination of 40 percent of all of the UK’s arms sales between 2010 and 2019.