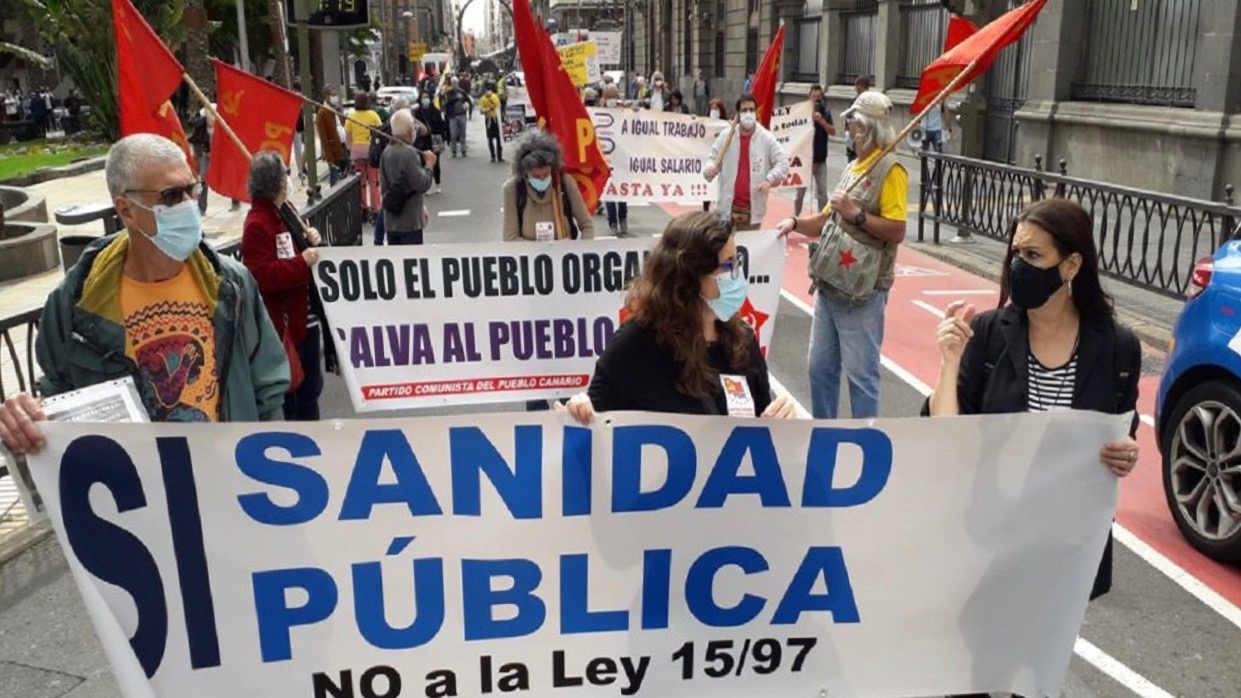 Mobilization against privatization of healthcare in Spain on Saturday, February 27. (Photo: PCPE)

Progressive sections in Spain organized mobilizations on Saturday, February 27 against the privatization of healthcare. The call for the mobilization was given by Coordinator for the Anti-Privatization of Health (CAS). The protesters called for the strengthening of primary health care and demanded the repeal of Law 15/97 and Article 90 of the General Health Law which enables participation of private companies in the public health sector. Trade unions, including the General Confederation of Labor (CGT), political parties like the Communist Party of the Peoples of Spain (PCPE) and Communist Workers Party of Spain (PCOE), as well as youth groups including the Communist Youth of the Peoples of Spain (JCPE), participated in the mobilizations.

Mobilizations were reported from over 60 places across Spain, including Madrid, Cadiz, Cordoba, Malaga, Barcelona, Girona, Bilbao, Santander, Valencia, Cartagena, and Toledo.  Unidad y Lucha reported that a handful of neo-Nazis tried to disrupt the anti-privatization mobilization in Madrid on Saturday. However, instead of acting against the perpetrators, the police detained CGT leader Santiago de la Iglesia. The CAS denounced the arrest of the trade unionist and stated that “the fight for Public and Universal Health is also the anti-fascist fight.”

Protesters on Saturday said that COVID-19 has devastated the health care sector in Spain and claimed that the public-private model is inadequate to deal with the crisis. They also called for more resources to be invested in the public health sector and for the development of the pharmaceutical industry in the public sector.

According to CAS, “for decades, governments have barely financed or staffed and privatized health systems around the world. And these trends have aggravated the impact of the pandemic.”

CAS also called for repealing articles 67 and 90 of the General Health Law, which allow patients to be referred to the private sector through various agreements, and Law 15/97 which allows a public center to be managed by private companies.

The PCPE has stated that “it is necessary to reverse all the legislation that has allowed the privatization of health care and weakening of the public health system, as well as to demand a health model where health workers and workers take more roles in managing the centers.”