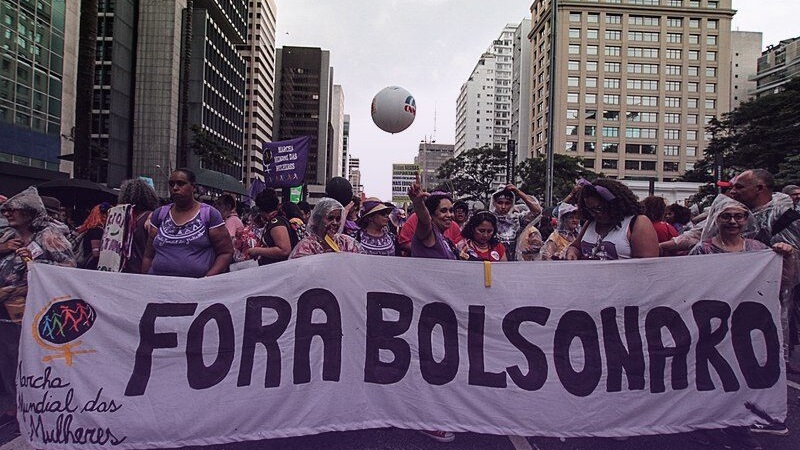 Today in Brazil, women are facing the advancement of predatory neoliberalism, imperialism, an anti-democratic State, the politics of death, and the extermination of the people, which has been escalating with the coronavirus pandemic.

In 2016, women were the first to rise up and denounce the coup staged against the first female president elected in the country, Dilma Rousseff. A political, judicial, media-backed coup that bore the increasing offensive of Latin America’s conservative neoliberal right also bore patriarchal violence against Brazilian democracy and against a woman who had been elected with 54 million votes.

The coup staged by Michel Temer and all right-wing sectors built a “bridge to the past”¹, destroying important achievements in people’s lives and democracy. It also opened the way for an election process based on lies, on misinformation, on criminalizing former president Luiz Inácio Lula da Silva and other grassroots leaders, and on the collusion orchestrated by the rich of this country — and also from abroad —, which has led power to be taken by the worst of Brazil. Bolsonaro means sexism, racism, authoritarianism, and subservience to international capital.

Now we are experiencing the results of this firsthand: Bolsonaro works to spread a deadly virus through the population who is now neglected, left to fend for themselves and relying on an increasingly fragile public healthcare system. His actions to disrupt the State’s healthcare and social service systems force thousands into extreme poverty and unemployment, especially women and Black people who were already underemployed or working in the informal sector. Not only that, violence and femicide are escalating.

Violence against women is structural, enabled and deemed natural every day in our society. Physical and psychological harassment and abuse, domestic violence, femicide, and rape culture make life more dangerous for women. There is a “veiled” permission to kill women, Black and poor youth, Indigenous peoples, LGBTQI+ people. In 2019, 75% of homicide victims in Brazil were Black. The military police are racist and extremely brutal—in the past few months, they killed children outside their homes. Adding to this violent context is the loosened access to guns and the end of policies to prevent and fight sexist violence.

In 2021, in the context of a pandemic that has imposed restrictions to movement, women will not remain in silence or disconnected. There is an army of them working to unify and build strength to bring down Bolsonaro. One example is the nationwide actions that are being built for March 8, connecting women from rural and urban areas, from the waters and forests. Their solidarity actions connect with the demand for the emergency aid2 and vaccines for everyone. This is the routine of women who support the struggle and survival at the same time.

Why do we say “Fora Bolsonaro” (“Out With Bolsonaro”)?

Bolsonaro is responsible for this rock bottom we have hit: no health, no safety, no rights, no dignity. Bolsonaro is doing all that with massive support from reactionary economic and political sectors and religious fundamentalists, in addition to congressional caucuses connected to military sectors and big landowners. Military officials hold key positions in the government. The Bolsonaro administration’s political program is neoliberal, conservative, and authoritarian. They strike at our jobs, our land, our bodies. The same people who remove workers’ rights are those who try to even hinder and stop girls and women from resorting to abortion in circumstances the law allows3.

Bolsonaro has been working to dismantle the State and public healthcare, education, and social service institutions and also state-owned companies and common goods, as we have been witnessing with the electric utilities company Eletrobras, the oil company Petrobras, the postal service company Correios. This is a systematic policy implemented since the Constitutional Amendment 55 (a 20-year budget freeze also known as the Death Bill) was passed by right-wing parties in 2016. The destruction of nature has reached unprecedented levels in the country. Despite so many attacks, the workers of our Unified Health System (Sistema Único de Saúde — SUS) struggle to save lives and researchers at universities and public institutes are striving to achieve better treatments, medications, and vaccines for children and adults.

For all this history of attacks in recent years, we do not trust or accept the attempts by some right-wing sectors to mask themselves as different, as “the good right.” They are all accountable for the chaos that we are living in, because they give precedence to a profit-centered economy and connive in privatization, in increasing life vulnerabilities, and in cutting back the right to decent, risk-free labor. For this reason, our way out is to the left: it is only through intense grassroots, feminist, anti-racist organizing that we will be able to remove the right from power and reorganize the economy, putting life in the center of concerns and policies.

Women demand vaccines for everyone and emergency aid

As we are witnessing across the world, women suffer the harshest impacts of the pandemic, because they are the ones sustaining life. We couldn’t stop one second during the pandemic, shouldering even more domestic and care work. Women, especially Black and poor women, make up the majority of frontline workers facing COVID-19, in healthcare and the services industry.

We are talking about more than 250,000 deaths in one country! It’s not about lack of information or planning—it’s about a plan to exterminate the poor, Indigenous people, Quilombolas4, and other communities who live in lands that he wants to hand over to miners, loggers, and big landowners.

The Bolsonaro administration’s Environment minister literally said that his plan for these times of pandemic was to “run the cattle herd” through, referring to disputed areas in the Amazon rainforest. It’s a government that dismantles all policies supporting agroecology and food sovereignty, favoring large-scale monoculture plantations, transgenic crops, the large-scale use of toxic chemicals, deforestation in our biomes, privatization and financialization of our nature, and the contamination of our waters with toxic mud and substances.

Moreover, the measures organized by the Brazilian government for people’s work and safety are extremely hazardous, because they are based on an idea that “the economy can’t stop”: increasing the flexibility of rights, business as usual for nonessential industries, unemployment and informal employment. In the first quarter of 2020, 52.1% of Black women and 43.8% of white women were working were in informal or vulnerable jobs5. Puzzlingly, people are forced to leave their homes and risk their lives to find ways to survive. Speaking to the press about measures to contain the pandemic, Bolsonaro has stated things such as, “so what?” “I’m not a gravedigger,” and “I’m not a miracle worker.”

There is only one way to stop the death, hunger, and unemployment that haunt us, a reality for thousands of Brazilian households: Bolsonaro and all his corrupt, militarized government must be immediately impeached.

We will keep marching in Brazil and the world

Across the world, women continue to struggle and create practical conditions for life to exist. There are a number of inspiring examples: community gardens, collective restaurants, solidarity and denunciation campaigns, symbolic actions, among so many others that lack enough exposure.

We will keep marching until there is no more hunger and until we can live life without violence, with the right to decide over our own bodies. In Brazil, we must remove Bolsonaro from office in order to build alternatives for life, to restore democracy, to put care and decent life in the center of politics. In several parts of the world, we need assertive feminist, anti-capitalist, and anti-racist struggle to stop the rise of neoliberalism and its death-driven program. The strength and leading role of the women’s movement places feminism as an essential perspective in building a new society.

1 “Bridge to the past” is a reference to the coup-plotting Michel Temer administration’s government plan, which replaced Rousseff in 2016. His “Bridge To the Future” plan had a neoliberal character and represented a rupture with the political project that had won the election two years earlier.

2 It was the grassroots mobilization in mid-2020 that successfully pushed for the creation of an emergency aid to provide monthly R$600 [roughly US$100] payments to Brazilians. The Bolsonaro administration moved to cut down the aid to R$300 (nearly one third of a minimum wage in the country), then cut it completely.

3 Ordinance No. 2,282, which creates obstacles for abortion procedures, is an attack on human rights. While setbacks such as this are happening in Brazil, our Argentinian hermanas have shown that, with massive feminist organizing and mobilization, it is possible to move forward in building equality and autonomy. In late December 2020, Argentina legalized abortion up to the 14th week of pregnancy, a victory for all women in Latin America.

4 Quilombolas are residents of quilombos, communities originally established as a place of resistance and refuge for Black people who were enslaved during Brazil’s slavery period.

Maria Fernanda Marcelino is a historian, World March of Women activist, and member of the feminist organization SOF — Sempreviva Organização Feminista. This is an edited version of her article published in the Sempreviva Column on Brasil de Fato, on March 2nd, 2021. 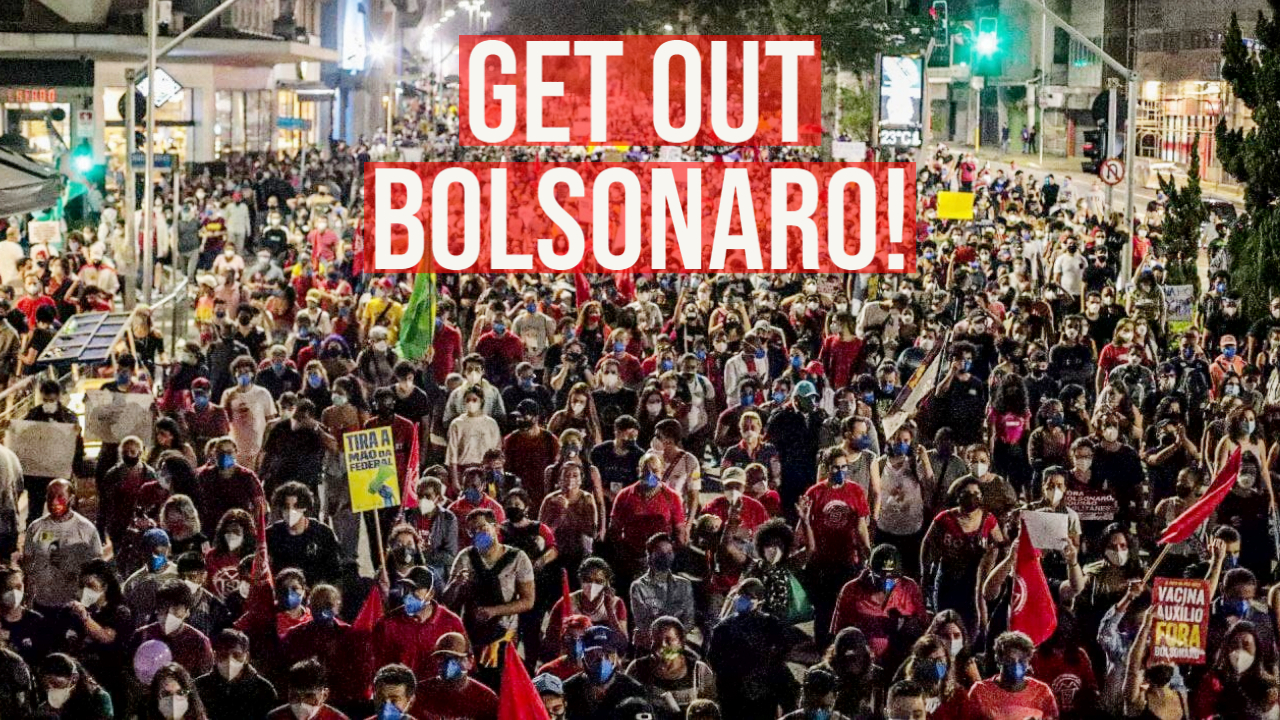