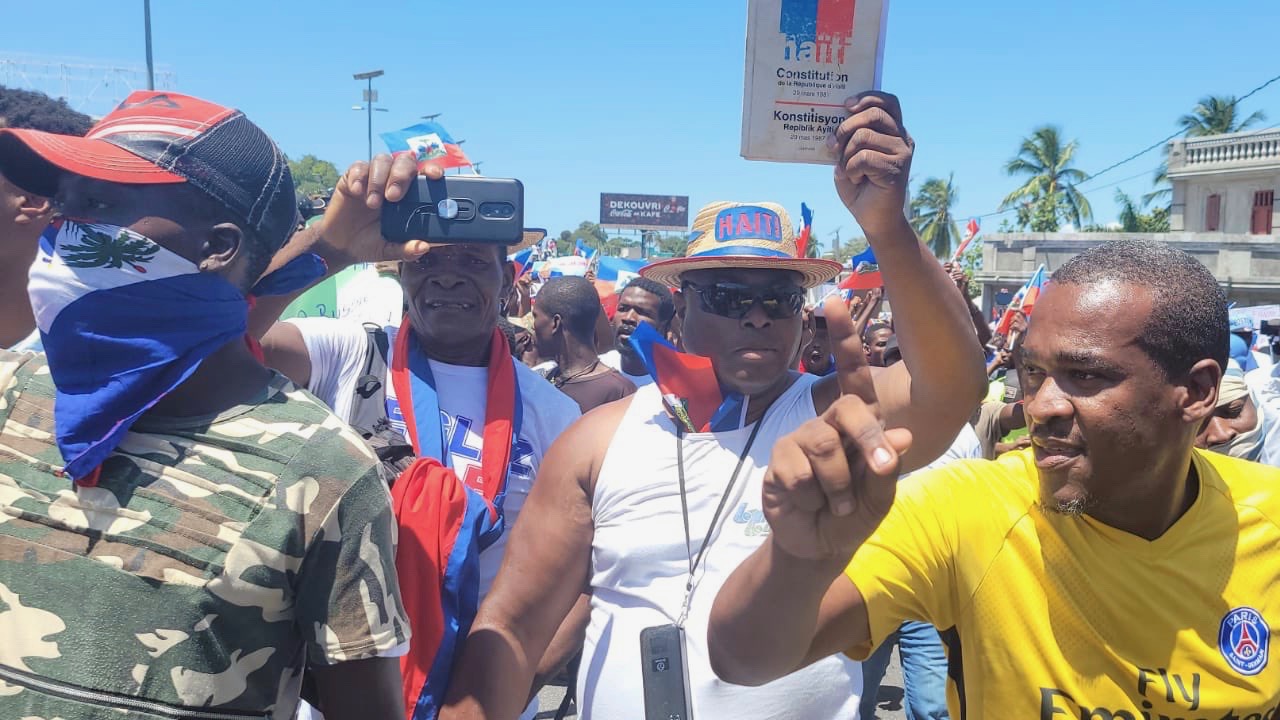 Since January, tens of thousands of Haitians have been mobilizing against Jovenel Moïse’s decision to hold a constitutional referendum in June, and presidential and legislative elections in September. Photo: Eugene Puryear/BreakThrough News

March 29 marked the 34th anniversary of the referendum adopting the Haitian Constitution of 1987. The constitution is the main achievement of the democratic movement of 1986 that led to the fall of the 29-year-long Duvalier family dictatorship. On February 7, 1986, dictator François Duvalier’s son Jean-Claude Duvalier was overthrown in a popular uprising and fled to France, giving way to the democratic transition in Haiti. A year later on March 29, 1987, the constitution, which was drafted following the fall of the dictatorship and represented the victory of the people over the authoritarian regime, was approved with an overwhelming majority of 99.8% of the votes.

In commemoration of the historic achievement and in the face of the attack against it under the current illegitimate regime, yesterday, thousands of Haitians took to the streets across the country in defense of the constitution. They also mobilized in rejection of the de-facto president Jovenel Moïse’s decision to replace it with a new one that provides for the return to a presidential regime.

In the capital Port-au-Prince as well as in other cities, several large demonstrations were held. The protesters also demanded that Moïse respect the constitution and leave the presidency citing that according to the Article 134-2 of the constitution his term officially ended on February 7, 2021. Further, they called on governments part of the Core Group, the US, the EU, the UN and the OAS to withdraw their support for Moïse, who has overstayed his term and is ruling by a decree with a non-functional parliament since January 2020.

More scenes from today’s mass demonstrations in Port-au-Prince. Where demonstrators demanded an end to the Moïse regime, with a clear theme of opposition to US support for Moïse as well. #FreeHaiti pic.twitter.com/8PDStsPNrs

Protesters are burning US flags today in #Haiti's capital… "This is what they get for overthrowing President Aristide. We don't want the US here and we don't need your damned visas. We want to fix OUR country." pic.twitter.com/aJzeHxosLy

Meanwhile, as a part of the International Day of Solidarity with Haiti, organized on the same day, various social and progressive organizations from across the globe demonstrated in different parts of the world to support the struggle of the Haitian people against the unconstitutional government and its illegitimate call to hold constitutional referendum in June, and presidential and legislative elections in September.

Various solidarity actions were organized in Argentina, Brazil, Canada, Chile, Dominican Republic, Ecuador, Puerto Rico, South Africa, the US, Venezuela, Zambia, among other countries, to demand an end to Moïse’s dictatorship, US imperialism and plundering in Haiti.

Members of various organizations in Dominican Republic, Ecuador and Puerto Rico demonstrated outside the US embassies, the UN and the OAS offices to demand respect for the self-determination and sovereignty of the Haitian people and an end to their interference in Haiti.

Several organizations wrote letters or petitions denouncing the crisis in Haiti and urging their governments to stop recognizing Moïse’s government. In Argentina, representatives of various social movements and groups held a meeting in the Chamber of Deputies to organize support for a state policy that respects the sovereignty and rights of the Haitian people.

Likewise, numerous international organizations issued a solidarity letter, demanding an end imperialist interference. “Taking into account the importance of this struggle and that this dictatorial regime still enjoys the support of imperialist governments such as those of the United States, Canada, France and international organizations such as the UN, the OAS, the EU and the IMF, we call to listen to the people of Haiti who demand the end of the dictatorship as well as respect for their sovereignty and self-determination and the establishment of a political transition regime controlled by Haitian actors that has enough space to launch a process of authentic national reconstruction,” stated the organizations.

They also demanded justice and reparations for the crimes committed by the UN Stabilization Mission in Haiti (MINUSTAH). “We call in particular on the UN and the OAS -which certainly have no right or morality to interfere in elections and other internal affairs of member countries- and on the governments of all countries, especially those who lent themselves to “occupy Haiti humanely” for 13 years -through MINUSTAH-, to stop behaving as if Haiti were their colony. Enough of interference! Their duty is to ensure justice and reparations for all the crimes they have committed against that people and country, including the introduction of cholera, rape and sexual abuse, impunity for their electoral manipulation and the use of “cooperation” to their own ends,” they claimed.

Cheering megaphone Happening now! We're joined artists and organizations from around the world for an evening of art, music and solidarity with the people of Haiti! #HaitiCantBreathe #HandsOffHaiti #AyitiLeveKanpe