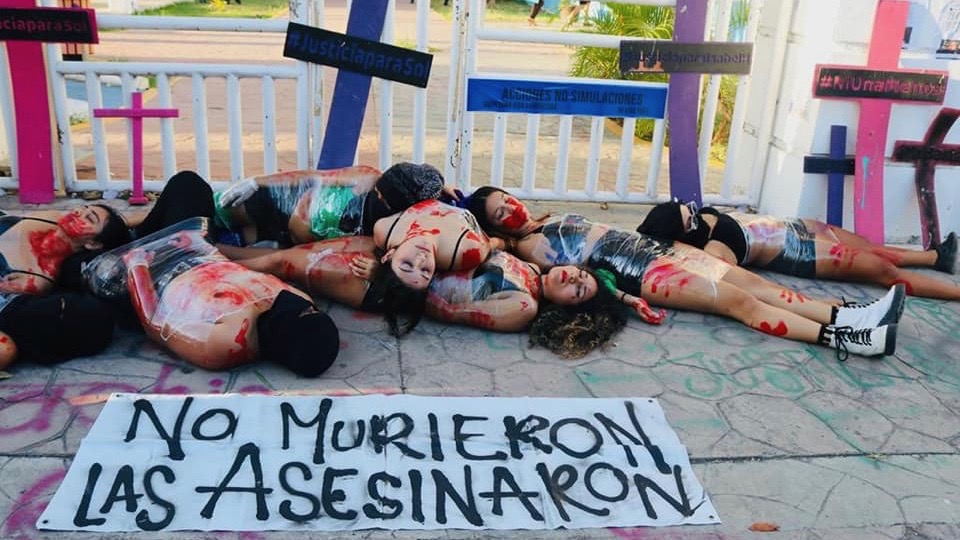 On March 30, members of various feminist collectives, women’s organizations and residents of the Tulum municipality in Mexico took to the streets to demand justice for Salvadoran migrant Victoria Salazar and other victims of femicides. Photo: Colectiva Feminista Tulum/Facebook

On March 30, members of various feminist collectives, women’s organizations and residents of the Tulum municipality in the Quintana Roo state of Mexico took to the streets of the municipality to protest the femicide of Salvadoran migrant Victoria Esperanza Salazar by the local police. Over 300 protesters demonstrated at the intersection of Satélite and Tulum avenues and then marched to the city hall to demand justice for Victoria and other victims of femicides in the Quintana Roo state. The Tulum Feminist Collective also demanded cessation of police brutality and police violence.

36-year-old Victoria was murdered by four police officers, one woman and three men, on March 27. While detaining her, one of the officers, the policewoman, held her down with her knee on her back and despite her complaints that she couldn’t breathe, no security official did anything to help her. When they noticed that she was not moving, they didn’t call an ambulance, but instead carried her limp body onto the back of a police truck. According to the autopsy report released on March 29, Victoria suffered fractures of the first two vertebrae of her spine that led to her death.

Victoria was a mother of two girls and had moved to Mexico on a permanent humanitarian visa in 2018. She was living in Tulum and was working as a housekeeper in a local hotel. The police said that they responded to a public disturbance call and alleged that she was detained for public inebriation.

The protests to demand justice for Victoria extended to the cities of Cancun, Chetumal, Holbox, Playa del Carmen, Cozumel and Felipe Carrillo Puerto in the Quintana Roo state as well as to the capital Mexico City. In all these protests, Mexican women denounced the escalation of femicides in the country and the impunity surrounding the crime. Mexico is one of the countries with the highest femicide and impunity rates in the world. According to the official records, an average of 10 women are killed every day in Mexico, and less than 10% of these cases are solved. The day Victoria was killed, three other women were also murdered in Quintana Roo.

Several national and international feminist groups and human rights organizations have denounced that Victoria’s death is a case of racism, classism, misogyny and xenophobia that prevail in the country and have called it an example of how migrants and the poor are treated in Mexico.

The CentAm Collective, through a thread on Twitter, condemned the regrettable incident and pointed out that Victoria’s death brings up several issues, such as the issue of state-sanctioned, narco, and/or xenophobic violence against Central American migrants, the issue of police brutality and the issue of racist and gender-based violence.

The collective emphasized that “as of 2017, the NGO Mesoamerican Migrant Movement estimates that over 70,000 migrants from Guatemala, Honduras, El Salvador and Nicaragua have gone missing crossing Mexico during the past decade.” the organization also said that “the Mexican police and military are known for their constant disregard for human life” and highlighted the massacre carried out by the Mexican police last month near the Mexico-US border, in which 19 people were killed, including 13 Guatemalan migrants. The collective also stressed on the fact that despite the influx of white migrants and tourists in the area, who drink excessively and consume drugs publicly, the only migrant/foreigner stopped this weekend over alcohol use, and later killed, was a dark-skinned, low-income Central American woman. The entity said that Victoria’s death “exposes a system that targets” people like her.

UN agencies such as the International Organization for Migration (IOM), the Office of the United Nations High Commissioner for Human Rights (OUCHR), the United Nations Entity for Gender Equality and the Empowerment of Women (UN-Women) and the United Nations High Commissioner for Refugees (UNHCR), in a joint statement, also repudiated Victoria’s murder and stressed that it represents a case of double discrimination as the victim was a woman and a migrant. They called on the Mexican authorities to carry out a prompt and impartial investigation of the case. They also rejected the excessive use of force by the police and demanded that the authorities adopt necessary measures to prevent the repetition of this type of events.

The four officers have been fired, detained and charged with the crime of femicide. However, feminist and human rights organizations have expressed that this punishment is not enough and that there is a need to change the system killed Victoria.

The National Human Rights Commission (CNDH) reported that it has opened an investigation into the case. and pointed out that “violence against women takes place within a framework of social impunity, for which the Mexican State has the obligation to guarantee them a life free from aggression and to implement actions and policies to guarantee their human rights.”