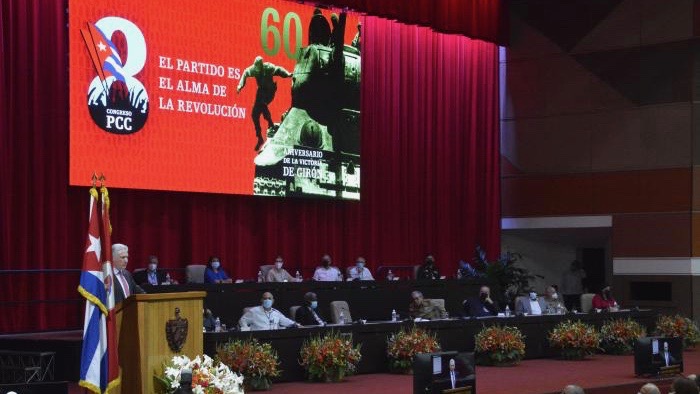 The Eighth Congress of the Communist Party of Cuba concluded on April 19, after four days of intense debate, discussion and powerful speeches. The Congress “for the Historical Continuity of the Cuban Revolution” was attended by 300 party cadre and leaders and was the first since the death of Fidel Castro on November 25, 2016.

The historic four-day Congress coincided with the 60-year anniversary of the US-sponsored invasion of Playa Girón and the subsequent Cuban victory against US imperialism, as well as the declaration by Fidel Castro of the socialist nature of the Cuban revolution.

The Congress took place at a moment of increased difficulty on the island as it has not been spared the economic impact of the COVID-19 pandemic nor the second wave of infection sweeping across the region. Furthermore, while the recently inaugurated administration of US president Joe Biden has indicated that it will potentially reevaluate and ease up on some of the measures taken against the island by the Trump administration, it has yet to take any steps on this. As the wait continues for the reversal the designation of Cuba as a sponsor of terrorism and the suspension of Title III of the Helms-Burton Act, Cuba and the Cuban people suffer the consequences.

However, despite the adverse conditions, Cuba persists and today amid the pandemic it is waging a battle not only for the survival of its own people but also for all of humanity by creating the first and only vaccine in Latin America and the Caribbean.

In this sense, charting the future of the country in the economic, political and organization realms was a key area of focus during the meeting. The Congress itself was the result of months of preparatory work and meetings held within the party’s provincial committees, the government councils, the mass movements, and the Young Communist League.

The key objectives of the historical gathering were first and foremost to evaluate the social-economic progress of the country since the 7th Congress held in April 2016, and renew and develop plans to continue the social-economic development of the country, taking into account the changing economic and political circumstances. Second, for the delegates to evaluate different aspects of party work and functioning, a task outlined in the 7th Congress. And third to analyze the work of party cadre in mass movements and in government roles, with a focus on the renewal and development of young and diverse cadre to continue the necessary task of deepening the revolution.

Raúl Castro, former first secretary of the party, opened the Congress on Friday with an important speech wherein he presented a detailed report on the three central topics of the Congress and reflected on the state of Cuba today.

“The Cuban economy in the last five years has shown capacity for resistance in response to obstacles presented by the intensified economic, commercial and financial blockade imposed by the United States. This has allowed for the preservation of the primary conquests of the Revolution with regards to public health, education, and social security, without sacrificing the determined objectives of development nor the support and solidarity to other nations,” declared Castro on Friday.

While Castro highlighted how the challenges faced by the Cuban economy have multiplied over the last year, with the impact to tourism sector, the intensification of measures imposed by the US, the dedication of a large portion of state resources to vaccine research and development, purchasing of personal protective equipment and other investments in preventative and protective medical measures, he also noted how the global health crisis has ratified the necessity for the Cuban model.

“In case there were doubts, we must recognize that neoliberalism once again showed its incapacity to respond to the social problems of the region. Its role in the dismantling of structures of social justice and the doctrine attack on any notion of social justice, left the majority of countries impotent and defenseless against the scourge of COVID-19,” he declared. The legacy of neoliberalism, he explained, “has been the increase of inequality, the deepening of social polarization, and the worsening of the crisis of stagnation and instability suffered in many of the societies of Our America.”

With regards to the composition of the party, the senior leader informed that the 300 delegates attending the conference were there in representation of the more than 700,000 militants of the party organized in 58,000 nuclei. The party came to the Congress with 27,000 new party militants, an important figure which also marked a departure from the decrease in numbers starting in the year 2006. Castro also highlighted that many of the new members are coming directly from the Young Communist League.

At the end of his report, Raúl Castro discussed another key objective of the 8th Congress which is the conclusion of the process to transfer responsibilities of the party from the historic generation to the new generations.

“I have the satisfaction of knowing that we hand over the direction of the country to a group of prepared leaders, seasoned by decades of experience in their paths from the base to the highest levels of responsibility, committed with the ethic and principles of the Revolution and Socialism, identified with the roots and values of the history and culture of the nation, imbued with sensitivity towards the people, full of passion, anti-imperialist spirit and wisdom that represent the continuity of the work began by [Carlos Manuel de] Céspedes on October 10, 1868,” he declared.

He added that he was one of those from the historic generation that would be transitioning out of party leadership, stepping down from his post as First Secretary of the party. He affirmed though, that he would continue to be a committed revolutionary militant of the party until the end of his life.

On Saturday and Sunday, April 17 and 18, the 300 delegates broke up into commissions to discuss the report and analysis presented by the Central Committee of the party. The commissions drafted reports on the same which will be the key guiding documents over the next period. On Monday April 19, the composition of the Central Committee and the Polit Buro of the party were announced with current president of the country Miguel Díaz-Canel Bermúdez being elected as the First Secretary of the party.

Following his election as First Secretary, Díaz-Canel gave a speech to bring an end to the four days of reflection and debate, discussing the situation in Cuba now and the responsibility of the party, leaders, and himself in light of this moment. He affirmed that “The success [of the Revolution] depends on the capacity to be in dialogue with the population, excite the citizens, and rebuild values, conscious that democracy becomes more socialist when it is more participatory.”

With regard to Cuba’s position globally, Díaz-Canel commented that it has “given a lesson to the world of how political will and the humanitarian position of the Revolution along with public policies that put human beings at the center, can successfully confront problems as complex as the COVID-19 pandemic.”

“The most revolutionary thing within the Revolution is to always defend the party, in the same way that the Party should be the biggest defender of the Revolution,” he stated, “The Communist Party of Cuba is permanently tied to this symbol of resistance and victory waiting for those that fight for the rights of their people, and do not demand more than a place in the vanguard.”

The Congress concluded with a ceremony to remember the lives lost at Playa Girón and all the others lost to US imperialist attacks.

With the 8th Congress, the Communist Party of Cuba once again affirms the ideological nature of the Revolution and renews the strategic objectives and plans to ensure the continuity of the process a vital proclamation in the midst of the neoliberal conservative onslaught in the region. As Raúl Castro said during his opening speech, “The commitment of Cuba with the unity of Latin America and the Caribbean is immovable, the loyalty in defense of sovereignty and the right to free self-determination by the peoples is a principle of the Revolution, and the will to promote cooperation and regional integration is part of our cause. We will not give up for one minute on the task of contributing to build Our America, the common homeland of all our sons and daughters.”