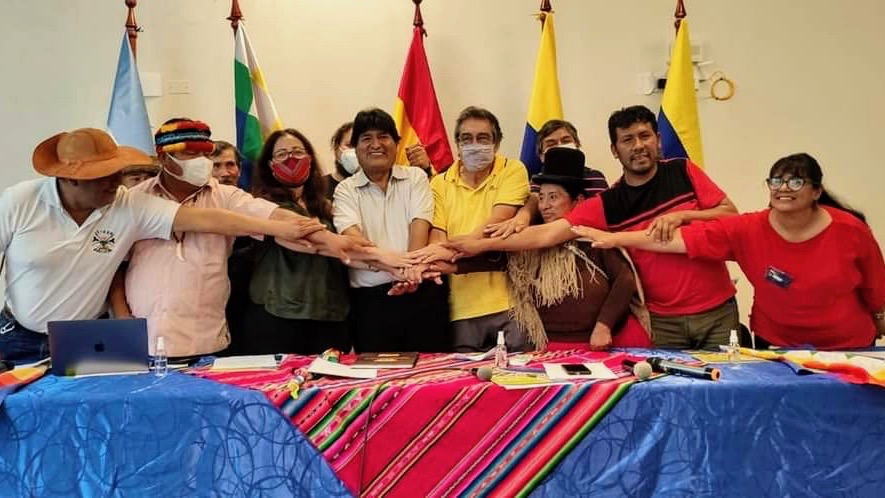 Former Bolivian President Evo Morales and other members of the technical commission on the launch of RUNASUR. Photo: Evo Morales/Twitter

On April 25, former Bolivian President Evo Morales announced the birth of RUNASUR, a new regional integration mechanism aimed at uniting the Indigenous people, peasants, social movements and workers of Latin America with an anti-imperialist ideology. The organization will serve as the people’s alternative to the Union of South American Nations (UNASUR), an existing regional integration mechanism that has become paralyzed due to the withdrawal of the majority of members under right-wing governments. RUNASUR brings together grassroots organizations of 12 Latin American countries that originally constituted UNASUR. Its central headquarters is located in Bolivia, and its main objective is the construction of a Plurinational America.

“RUNASUR’s goal is to unite social movements -be it Indigenous, workers, middle class and teachers, intellectuals and professionals-, and fight for a true liberation, a Plurinational America, of the peoples for the peoples. Purinational America is not compatible with capitalism, imperialism or colonialism,” said Morales, during a press conference held at the conclusion of the first meeting of the technical commission appointed to launch the RUNASUR. Morales stressed that a Plurinacional America will help us “go beyond the unity of Indigenous and social movements, and the defense of progressive governments” and will allow us to “seize power with our programs, cultures and ways of living in harmony with Mother Earth.”

On April 24 and 25, a commission of representatives of various social movements and Indigenous leaders from Argentina, Bolivia, Ecuador and Venezuela met in the town of Villa Tunari, Trópico of Cochabamba, Bolivia, to define the general structure and strategy for international organization.

At the conclusion of the two-day-long event, which was hosted by Morales, Argentine union leader Hugo Cachorro Godoy, who took part in the meeting, informed that the technical commission would “contact and invite the social movements, Afro-descendent and Indigenous organizations, trade unions in the rest of the countries of the region to strengthen RUNASUR and prepare for a great plurinational assembly of our peoples.” Meanwhile, Morales reported that Bolivia will coordinate and work with Peru and Paraguay, Argentina with Brazil and Uruguay, Ecuador with Colombia and Chile, and Venezuela with Suriname and Guyana.

The idea of creating RUNASUR was suggested by Morales in November 2020, a day after he returned to Bolivia after spending a year in exile, and called for the creation of an international organization of social movements. In December 2020, during the first ‘Meeting of Peoples and Organizations of Abya Yala towards the Construction of a Plurinational America’ in Bolivia, the call for the creation of RUNASUR or the Union of the People of South American Nations was formalized.

UNASUR is a sub-regional integration mechanism, created during the period of left-wing governments in Latin America and the Caribbean. It was formalized on May 23, 2008, under the leadership of Commander Hugo Chávez with the objective to build integration in the cultural, economic, social and political areas while respecting the diversity of each of the member nations.

It consisted of 12 Latin American countries: Argentina, Bolivia, Brazil, Chile, Colombia, Ecuador, Guyana, Paraguay, Peru, Suriname, Uruguay and Venezuela and brought together over 400 million people with the vision of a Latin American identity based on the principle of unity in diversity.

However, in April 2018, Argentina, Brazil, Chile, Colombia, Paraguay and Peru withdrew from the organization due their alignment with US imperialist interests. In March 2019, Ecuador also announced its withdrawal from the organization and the president of the country asked the bloc to return the headquarters building of the organization, based in its capital city, Quito. In November 2019, following the civic-military coup against the democratically elected government of Evo Morales, the de-facto government withdrew Bolivia from UNASUR. In March 2020, Uruguay announced its departure from the regional body. In November 2020, after the election of President Luis Arce in Bolivia, the country rejoined the body. Presently, it has only four members: Bolivia, Guyana, Suriname and Venezuela.