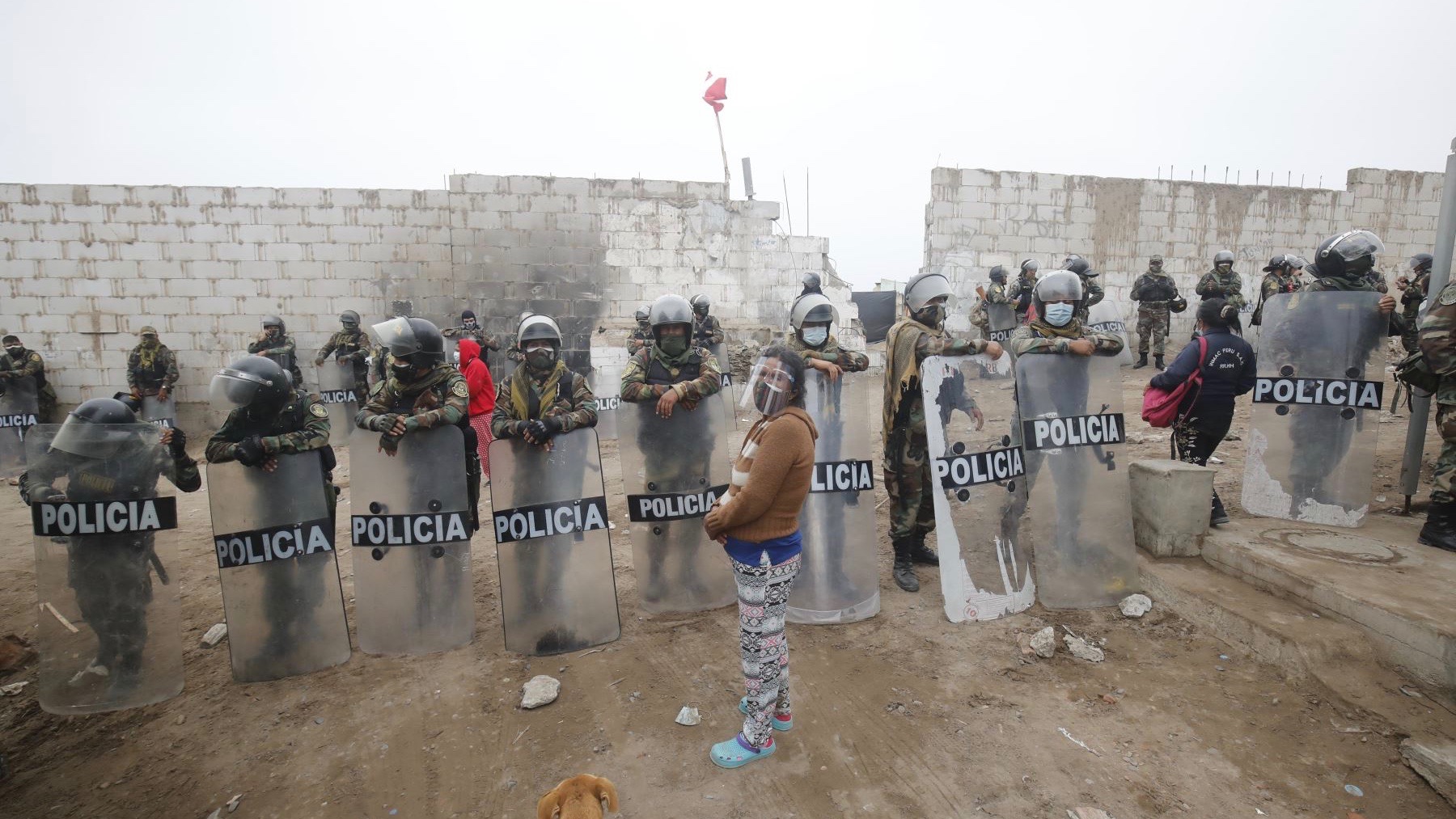 The officials of the Peruvian National Police dismantled the tents and collected the belongings of the families after evicting them from the ​​Lomo de Corvina area, situated on the outskirts of the capital Lima. Photo: ANDINA/Juan Carlos Guzmán

On April 28, the Peruvian National Police (PNP) violently evicted hundreds of homeless families living in temporary camps set up on abandoned land in the ​​Lomo de Corvina area, in the Villa El Salvador district, situated on the outskirts of the capital Lima. At around 7 am on Wednesday, a contingent of 2,700 police officials reached the site and began throwing tear gas canisters with the intention of removing the people from the place.

Faced with the attack, the occupants resisted by throwing stones, bottles and tires. However, after four hours of continuous repression, the police managed to vacate the property and took control of the land. After the families were evicted, the police dismantled their tents and collected their belongings. PNP general César Cervantes reported that 11 people were detained during the eviction.

On April 29, various local media outlets reported that these families have settled in the public streets, roads and highways near the land. They maintain that they do not have a place to live, money nor food to eat. They have indicated that they will not leave the streets until they are assigned a place for their relocation. Some residents of the district have provided these families with blankets, tents, cardboard, and food. Meanwhile, a large police contingent remains in the area to prevent the return of these families.

Since April 11, over 10,000 Peruvians, who lost their livelihoods and homes due to the economic impacts of the COVID-19 pandemic, had been living in tents and shack houses on the land, in precarious conditions without any basic services such as water, electricity and drainage, amid the health emergency.

The Lomo de Corvina is a sandy area with a slope. Years ago, it was declared an intangible zone by the cultural ministry, due to its high archaeological value. It is owned by and has been given in concession to a mining company that manufactures bricks. Last week, the National Institute of Civil Defense (INDECI) said that the terrain was unstable and extremely dangerous for people who intended to reside there.

Various human rights and social organizations rejected the forced eviction and reminded that it is a violation of human rights of these families according to the international standards established by the Office of the United Nations High Commissioner for Human Rights (OHCHR). They denounced that the structural problem behind such occupations is the lack of decent affordable housing policies on the part of the national and municipal governments.

The families are hoping for the installation of a space of dialogue to find a solution to their request and a space for them to live. However, the head of the Secretariat for Social Management and Dialogue of the Presidency of the Council of Ministers (PCM), Gisselle Huamaní, earlier this week reported that the government is not planning to relocate these families and urged them to return to “their homes of origin.”