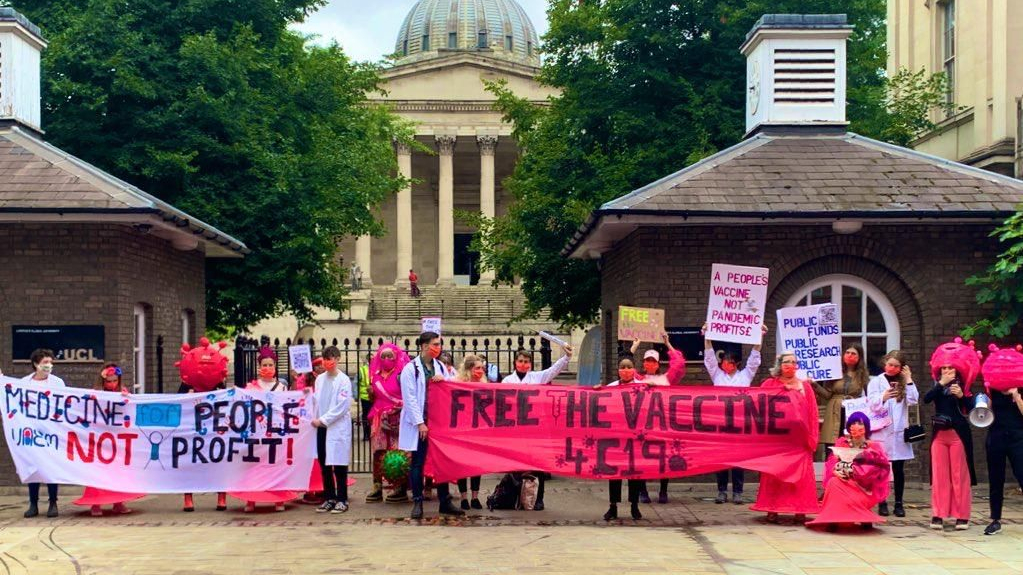 Photo : Free the Vaccine for COVID-19

A new public opinion survey conducted in G7 countries says that more than more than 70% of people want their governments to ensure that vaccine manufacturers share the know-how of COVID-19 vaccine production with others. The findings of the survey were shared by the People’s Vaccine Alliance on Wednesday, May 5.

Peoples’ Vaccine Alliance is a platform of various health and human rights groups and individuals who advocate free and universal vaccination.

According to the poll, the majority of responders believe that pharmaceutical companies, in return for proper compensation, should be prevented from monopolizing the COVID-19 vaccine production and allow wider production.

The support for governmental action to prevent monopoly was the highest in Italy with more than 82% respondents asking the government to intervene. Other countries had around two thirds of the population supporting the move — Canada with 76%, the UK with 74%, Germany with 70%, the US with 69% and France with 63%. In Japan more than 58% of people, across political ideologies, supported the move.

The G7 is a group of some of the world’s richest nations and comprises the UK, US, Japan, Germany, Italy, Canada and France. They are currently meeting in London.

Most of the members of the G7 are blocking a proposal put forward by more than 100 countries in the World Trade Organization (WTO) demanding the suspension of the patent right on vaccine production under its Trade Related Intellectual Property Rights (TRIPS) regime. The countries asking for suspension of the patent argue that it will lead to greater and cheaper production of the vaccine and help its equitable reach among poorer countries. However, the US and other countries blocking the proposal claim that suspension may harm future innovation.

Earlier this month, Progressive International published a similar survey conducted among US citizens before a crucial meeting of the WTO members. According to the survey, more than 60% of the population wanted the Joe Biden administration to allow the suspension of patent rights. US officials have hinted that the country may change its position on patent waiver.

The slow rate of production has delayed fast vaccination across nations leading to fresh COVID-19 outbreaks. Scientists and doctors also warn that slow vaccination could cause the virus to mutate, including vaccine resistant strains.

The proposal to suspend vaccine patents was first put forward by South Africa and India last year. Later it was endorsed by more than 100 countries along with the World Health Organization (WHO), the UN and several other civil society and human rights groups who are campaigning for vaccine equality and against the hoarding of vaccines by rich countries.

WHO has also started COVID-19 Technology Access Pool as a platform for vaccine innovators to share the know-how. However, so far, no pharma company has joined the platform. WHO’s COVAX initiative with GAVI is unable to deliver promised vaccine doses to poorer nations due to the shortage in production.

Another meeting of WTO members is scheduled for Wednesday to discuss patent waiver.