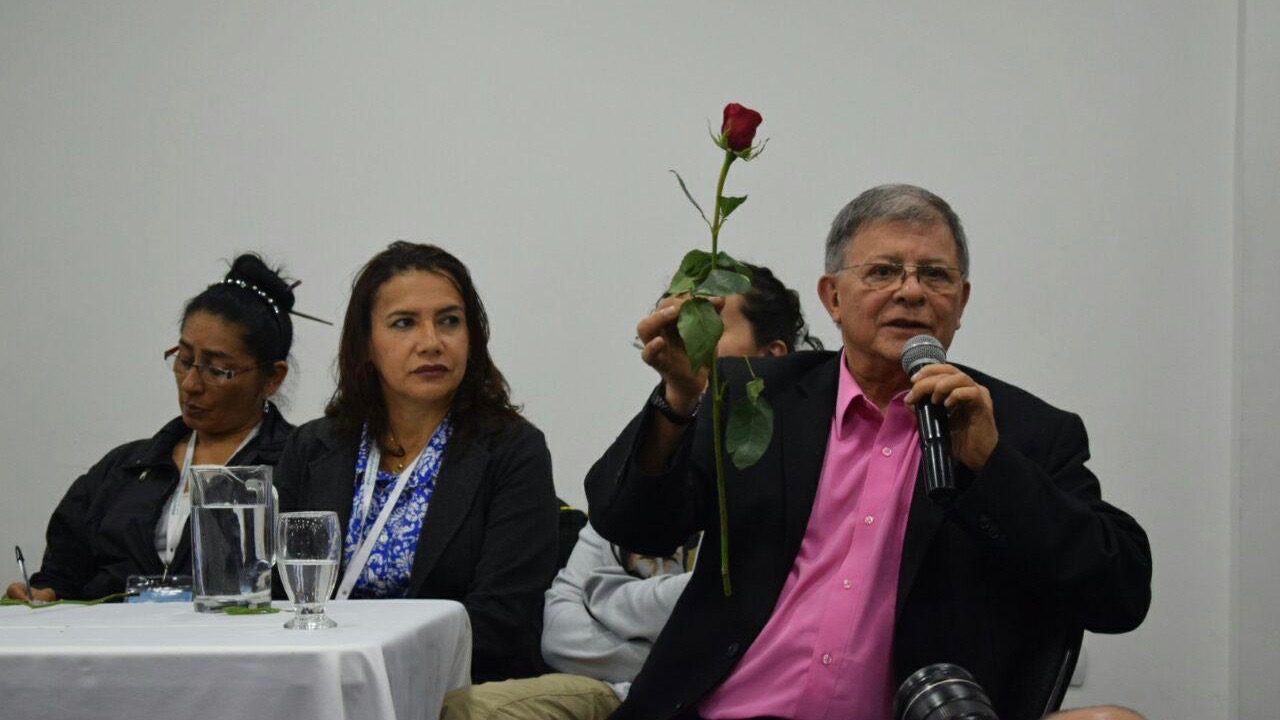 Rodrigo Granda of the Comunes party has been fighting for peace and social change in Colombia since the 1970s.

Since the end of April, Colombia’s streets have smelled of tear gas. The government of Colombian President Iván Duque imposed policies that put the costs of the pandemic on the working class and the peasantry and tried to suffocate any advancement of the Havana peace accords of 2016. Discontent led to street protests, which were repressed harshly by the government. These protests, Rodrigo Granda of Colombia’s Comunes party told us in an interview, “are defined by the wide participation of youth, women, artists, religious people, the Indigenous, Afro-Colombians, unions and organizations from neighborhoods of the poor and the working class. Practically the whole of Colombia is part of the struggle.” A range of concrete demands defines the protest: running water and schools, the disbandment of the riot police (ESMAD), and the expansion of democratic possibilities.

The Comunes party was formed in 2017 by members of the FARC-EP (Revolutionary Armed Forces of Colombia-People’s Army). Granda, who is known internationally for his former role as the foreign minister of the FARC, is now in the national board of the Comunes party. As a legal political party, Comunes is a direct product of the 2016 Havana peace accords signed by the Colombian government and the FARC. Over the past two years, members of the Comunes have been on the streets alongside their fellow Colombians who are fighting to bring democracy to the country’s economy and politics. Granda spoke to us about the ongoing protests and helped to put these protests in the context of the long history of struggle in Colombia.

The current protests remind Granda of the 1977 national civic strike that he participated in, with one difference: then, he says, there was “no international solidarity,” while now the global media attention to Colombia’s struggle allows the people in his country “not to lose heart” during a difficult fight. The 1977 strike emerged out of a long struggle against the country’s oligarchy.

Years before the strike, Granda looked forward to the Colombian elections of April 1970. He hoped that the former president and general Gustavo Rojas Pinilla of the National Popular Alliance (ANAPO) would win. Rojas Pinilla was not a leftist, but he offered the country a way out of the grip of Colombia’s oligarchy. Young people like Granda hoped that an ANAPO victory in Colombia and then, later in the year, the victory of Salvador Allende’s Popular Unity in Chile would help change the character of South America’s politics. But Rojas Pinilla’s victory was embroiled in fraud, and while Allende won the election, he was ejected from power in 1973 in a coup. Looking back over these 50 years, Granda told us that he feels an “internal frustration” with the theft of that election in 1970 and the tortuous path his country has had to take since then.

The fight has been difficult because the ruling bloc of Colombia, including Duque, is unwilling to honestly participate in a democratic agenda. None of the major political parties that have controlled the state since 1948 have been eager for any kind of change. Suffocation of politics since then and the routine assassination of political leaders moved the left—through the FARC and other groups—into armed struggle in 1964. The FARC regularly called upon the ruling bloc to open negotiations, but with little success. However, talks with President Belisario Betancur in 1982 opened the way to the 1984 La Uribe Agreement, which resulted in a ceasefire from 1984 to 1987. Members of the FARC joined with others on the left to create Union Patriótica (UP) as a legal political party. Attempts to move a reform agenda by the UP came alongside a policy of assassinations by the state against the left. No genuine liberal sentiment pervades the Colombian ruling bloc, which refuses to share even a modicum of power with other groups.

The situation deteriorated under President Andrés Pastrana—who was in power from 1998 to 2002—and US President Bill Clinton, who both signed Plan Colombia, which proved to be the beginning of a policy to define the FARC as “narco-terrorists” and conduct a war of extermination against the rebels. Incidentally, it was Pastrana’s father who stole the election of 1970 from Rojas Pinilla. Brutality characterized the Colombian state’s approach toward the FARC and toward anyone else who questioned its policies. Gradually, the ruling bloc was led by more and more ruthless men, none more so than President Álvaro Uribe (2002-2010). Uribe, Granda told us, “promised to exterminate us [the FARC] in four years, but he could not.”

Granda understands why peace had to define the agenda a decade ago. “After the failure of Plan Colombia and a stalemate in the war,” he told us, “we could not defeat the Colombian army in a short time, and the Colombian army could not defeat the guerrillas in a short time either. Therefore, a political solution through dialogue was necessary.” President Juan Manuel Santos (2010-2018) wrote a letter to the FARC saying that he recognized the internal problems in Colombia and also recognized that the FARC was a political organization and not a narco-terrorist organization. This set in motion the negotiation in Havana that resulted in the accords.

The accords put in place a plan for integrated agrarian reform and democracy, as well as restitution for the victims of the long war. “We put down our arms,” Granda said, “but we did not disarm ourselves from an ideological point of view.” The signing of the accords is only one part of the FARC’s plan toward peace, since their implementation is key before other kinds of meaningful change can be made. But the Colombian oligarchy, Granda said, has an entirely different view of what peace would mean. For the oligarchy, peace means that the guns of the FARC are silent. “For us,” he says, “peace means an attack on the factors that generate the violence in the first place.” These include factors like hunger, dispossession and the frustration with the oligarchy and the harsh violence by the state against which the people of Colombia continue to protest.

Zoe Alexandra is a journalist with Peoples Dispatch and reports on people’s movements in Latin America.