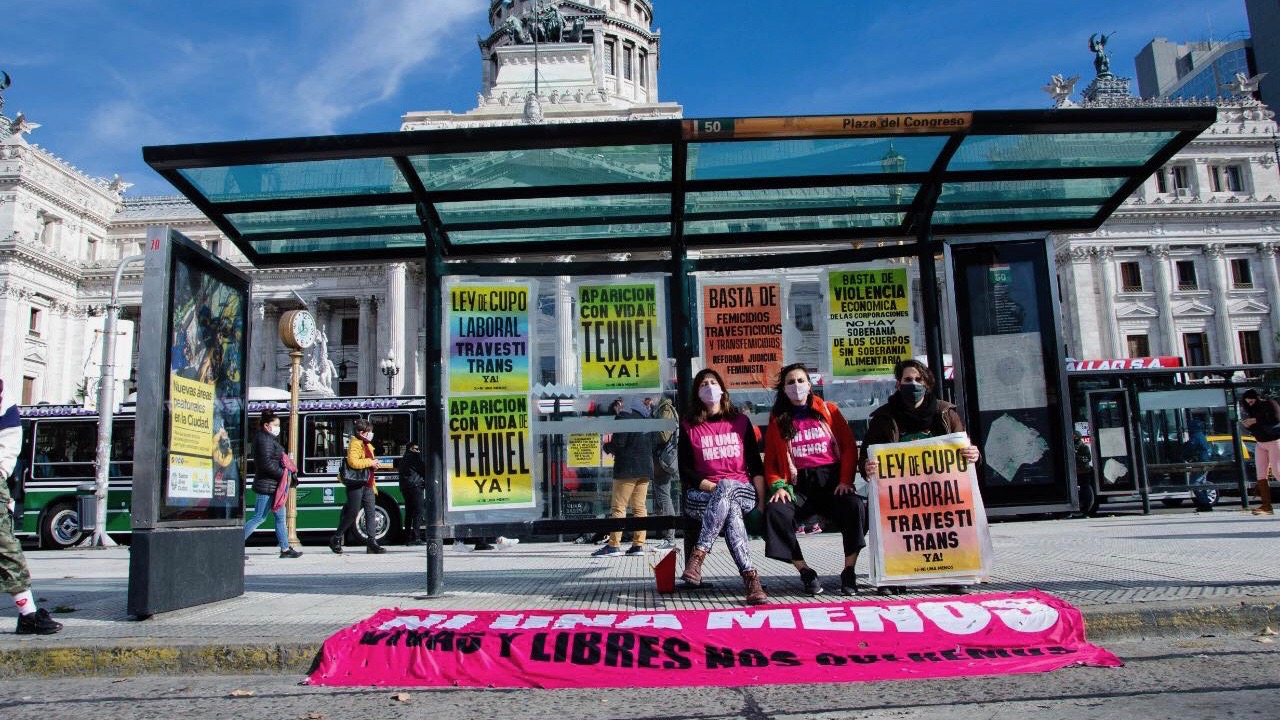 A group of feminists with posters displaying the urgent demands of Argentinians outside the National Congress in Buenos Aires. Photo: Ni Una Menos/Facebook

June 3 marked the sixth anniversary of the formation of the Ni Una Menos or ‘Not One (Woman) Less’ movement in Argentina. On June 3, 2015, in more than 80 Argentine and Uruguayan cities, hundreds of thousands of women flooded the streets and squares with a collective cry of exhaustion in the face of gender-based violence and its most crudest expression: femicide.

In the wake of the brutal femicide of 14-year-old Chiara Páez by her 16-year-old boyfriend Manuel Mansilla in May 2015, a group of feminist journalists, artists and academics came together and founded the organization to denounce patriarchal violence, demand an end to all forms of violence against women and call for equal socio-political rights for them. The movement expanded quickly and also became a collective for gender diverse people and their social struggles. It has spread across several Latin American countries such as Bolivia, Chile, El Salvador, Guatemala, Paraguay, Peru and Uruguay.

Since 2015, every year, the movement organizes massive marches across the country to raise voice against violence against women and non-binary people and demand justice for numerous of its victims. This year, like last year, due to the COVID-19 pandemic, the collective called on the people to mobilize virtually with hashtags and photos. It gave the call for a cartelazo, a unique form of protest in which it asked people to write or print their urgent demands and paste those carteles or posters in walls and streets throughout the country and share their photos on social media networks.

Not one less, we want to live, have freedom and be debt-free; enough of femicides, travesticides and transfemicides, feminist judicial reform now; job quota for travesti, trans now; Tehuel’s safe return now*; effective implementation of the voluntary termination of pregnancy law, not one more prisoner for aborting; we are all workers, vaccination and salary above inflation for gender promoters, state and essential workers; enough of economic violence of big corporations, there is no sovereignty of bodies without food sovereignty; were some of the messages displayed on posters.

Several people shared messages of strength and solidarity. For instance, Argentine journalist Flor Alcatraz, in a tweet, wrote that “six years ago, feminism, historically underestimated by traditional politics, transformed Argentine history and set the regional and global agenda. Not One Less became possible because we have a genealogy of struggle and insistence.”

Many published the alarming number of femicides and transfemicides committed in the country in the past years and expressed their fierce rejection of these crimes and the impunity around them.

According to the recent report by the ‘Now That They See Us’ Observatory, between June 3, 2015, and May 29, 2021, 1,717 femicides were registered in Argentina. In other words, a woman died every 31 hours in these six years. The data also showed that 64% of women were murdered by their partners or ex-partners, and 64% of these murders occurred inside the victim’s own home. Additionally, in another report, the observatory informed that so far in 2021, 103 femicides, 4 transfemicides and 79 attempted femicides have been registered in the country.

The data shows that the violence has not ceased to exist in these six years in Argentina. Women and non-binary people continue to be the victims of patriarchal violence. However, they are determined to fight it and claim their rights with collective actions.

*Tehuel De la Torre, a young trans man, disappeared on March 11, 2021, when he went to Alejandro Korn city in the Buenos Aires province for a job interview.