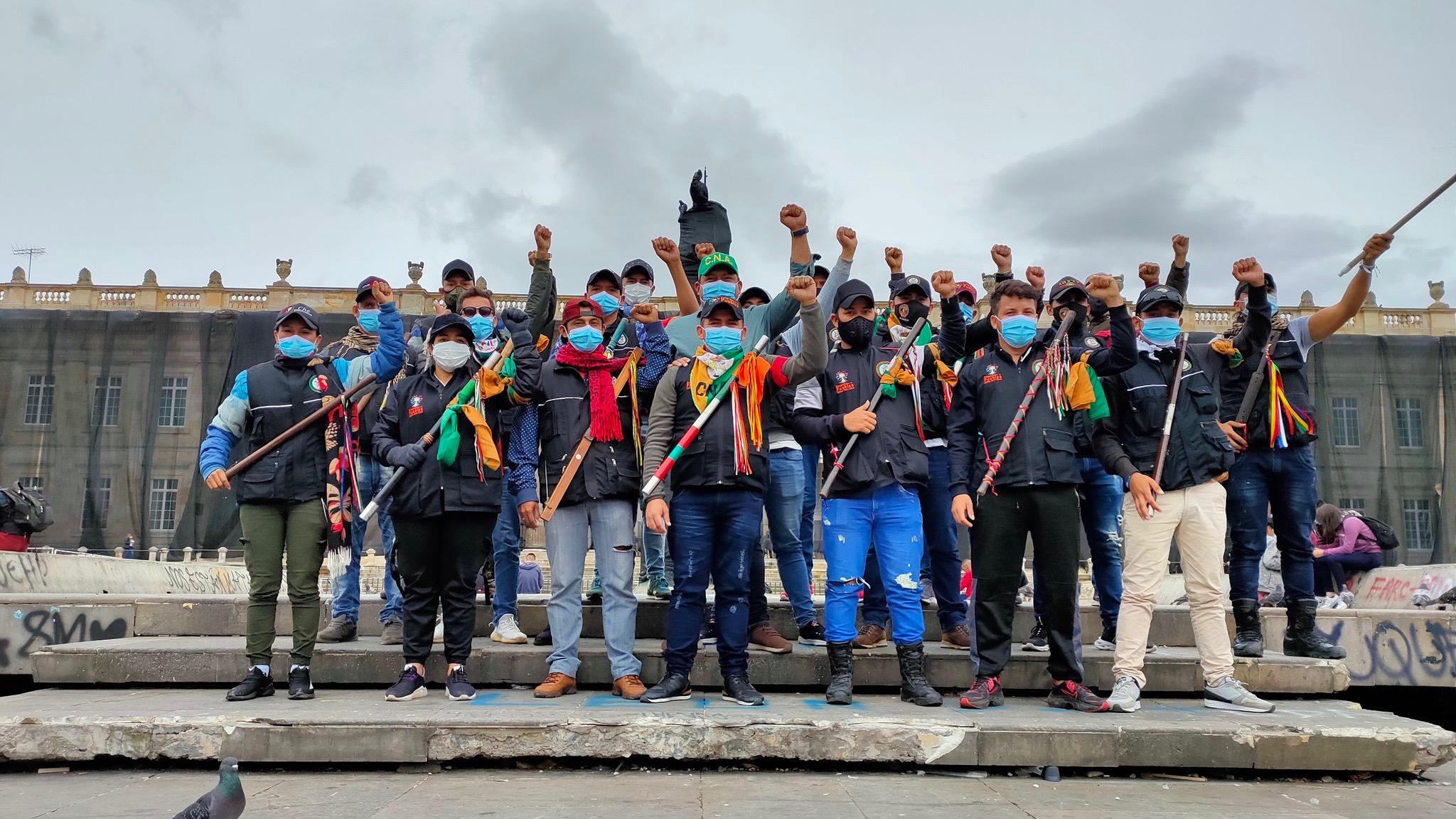 The peasant guard in Plaza Bolívar, Bogotá. Hundreds of members of people's movements converged on Bogotá for the National People's Assembly and to await the visit of the IACHR. Photo: Asonalca

Mobilizations continue in Colombia after six weeks since the beginning of the national strike. Movements and organizations that have been on the streets across the country since April 28 say that the government has not shown political will to engage in dialogue and respect the demands of the people. One of their key demands is that the government stop the violent repression of protesters wherein 40 protesters have already been killed and provide guarantees for citizens to exercise their fundamental right to protest.

Today June 9, the National Strike Committee called for fresh mobilizations in order to push for these demands. The committee brings together a diverse group of social organizations and trade unions that have been on the streets across Colombia since April 28 protesting against the right-wing government of President Ivan Duque and his neoliberal policies. The committee is calling on the government to sign the pre-agreement on providing guarantees and advance in negotiating the demands of the mobilizing sectors.

In the capital Bogotá, the committee called on citizens to massively join the demonstration organized under the banner of “the great takeover of Bogotá,” to demand an end to brutal police and military repression, which has killed over 40 protesters. The mobilization finalized at the Hotel Tequendama, where the representatives of the National Strike Committee and the Inter-American Commission on Human Rights (IACHR) held a meeting.

Yesterday, on June 8, the members of the human rights mission of the IACHR also called on the Colombian government to resume the dialogue process to address the ongoing social crisis. The IACHR mission came to Colombia to analyze the human rights violations committed by the state security forces during the past six weeks of national strike. The government had previously blocked the arrival of the commission but amid external pressure was forced to allow the visit.

Earlier on June 8, human rights organizations Temblores, Indepaz and Paiis held a press conference to present their report and findings on the human rights violations committed by national police and army officials and assist the IACHR in its work.

In the press conference, the three organizations reported that between April 28 and May 31, a total of 3,798 cases of police violence were registered in the country. These included 41 deaths, 1,649 arbitrary arrests, 1248 victims of physical violence, 705 violent interventions, 356 victims of forced disapperence, 65 victims with eye injuries, 25 victims of sexual violence and 6 victims of gender-based violence. The organizations also reported that during this period of time, 12 social leaders and human rights defenders, and 5 former combatants of the FARC dissent group were killed. Additionally, 42 people were assassinated in 9 massacres perpetrated across Colombia in the same time frame.

National and international social and political leaders and organizations have rejected the excessive, disproportionate and arbitrary use of force against unarmed citizens and have called on President Duque to address the demands of millions of Colombians.

The national strike began in rejection of a tax reform bill that would have affected the majority of the working class. Although Duque withdrew the bill, the protesters remained on the streets demanding that the government address the urgent issues facing the country as well as the long-standing demands of the various mobilizing sectors.

Since Duque took office in August 2018, there have been constant mobilizations by diverse sectors. However, the current national strike has been the longest and most unifying social outbreak in Colombia. It has transcended the national strike of November 2019, which brought tens of thousands on the streets across the country for several weeks against the government’s anti-worker policies. Nevertheless, Duque’s regime has yet to meet any of the crucial demands put forth since the historic strike.

Social movements including the People’s Congress (Congreso de los Pueblos), National Peasant Platform (Coordinador Nacional Agrario – CNA), Black Communities Process (PCN), First Line of the Portal de Resistencia called for the National People’s Assembly in the city of Bogotá from June 6-8. The assembly called for participation of all the workers, teachers, students, doctors, peasants, Indigenous and Afro-descendant communities, women and LGBTQ movements, human rights organizations, progressive political leaders, that have been on the streets and organizing to make the voices of the people heard.

The National People’s Assembly also presented a list of 22 demands for structural solutions to the fundamental problems of the working class and the popular sectors.

These include: dismissal, trial and punishment for the entire military and police leadership, who gave the order to shoot, torture, rape and disappear protesters during these weeks; immediate removal of mayors, governors, judges and prosecutors who are complicit in the violation of human rights and the systematic murders by the armed forces and paramilitaries within the framework of social protest; dismantling of the Anti-Disturbance Mobile Squadron (ESMAD); removal of the police from the hands of the Defense Ministry and the military leadership and that it responds to being a civilian force.

Additionally, the assembly demands the removal of the exemptions for large capitals and replace it with a progressive and permanent tax on large fortunes, directing these resources to health, education and work; breaking with the IMF, the World Bank and the OECD; increase in general salary according to the cost of living; elimination of VAT on the family basket; prohibition of dismissals and suspensions, abolition of the labor reform; a public pension system, no to pension reform and abolition of the AFPs; free public higher education and healthcare services for all; elimination of patents for the public production of anti-COVID-19 vaccines; expropriation of land from landowners, banks and large real estate companies and its delivery to peasants and citizens for agricultural activities and decent housing facilities, among others.

Following the three days of discussion, the participants in the assembly marched from the Claretian College to Portal Resistencia in the south of Bogotá.