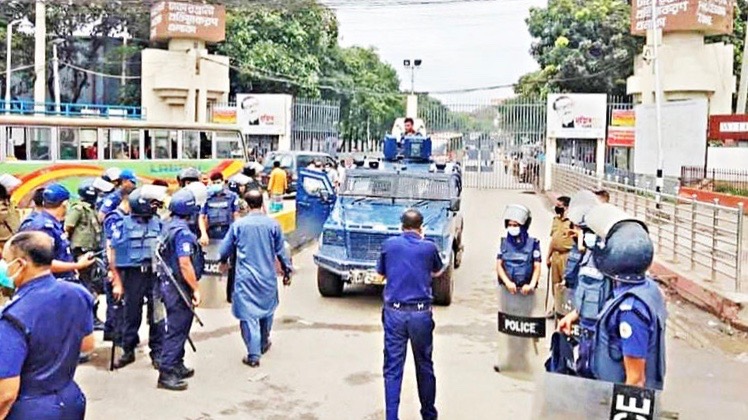 In Bangladesh, one person died and several others were injured in police action against garment workers protesting unpaid wages in capital Dhaka’s Ashulia suburb on Sunday, June 13. 32-year-old Jasmine Begum, a swing operator at Goldtax Garment Limited, died and at least 35 workers suffered injuries after police resorted to violence to disperse them from their protest site on the Dhaka-Tangail highway. Garment workers have been protesting for around a week in Bangladesh.

According to reports, around 600 hundred workers of Lenny Fashion Ltd and Lenny Apparels Ltd staged a protest in front of the Dhaka Export Processing Zone (DEPZ) on Sunday morning. Indian-owned Lenny Fashions had closed down its two-unit factory this January without clearing the wages of the workers. Garment workers demonstrating outside the DEPZ said that the workers of these factories have demanded their unpaid wages but the authorities have not addressed their concerns in the past three months.

A number of garment workers unions, including the Garment Workers Trade Union Centre, Garments Workers Solidarity and Garment Workers Front, condemned the use of force against workers.

Scores of garment workers have lost their lives while protesting in Bangladesh in the past. In April 2020, two workers died in Bhaluka Upazila district after being hit by a fast-moving truck as they were being forcefully dispersed by the police.

On May 10, 20 garment workers of the Ha-meem group, which supplies garments to major international brands like H&M, Gap and Zara, were badly injured when police used force to disperse a protest demonstration.

“Police shot the workers at point-blank range (using shot-gun pellets), which resulted in serious injuries. Incidents like these keep happening because the police shoot at workers with absolute impunity whenever they protest,” the Garment Workers Trade Union Centre said in a statement.

Bangladesh’s textile industry is the second largest in the world after China, with exports in 2018 valued at almost USD 30 billion. Though the industry has seen rapid expansion in recent years, its workers have been finding it difficult to make ends meet.

Even before the pandemic-induced crisis hit Bangladesh, a large number of garment workers in the country had been facing unprecedented repression, with employers targeting union activists and dismissing workers on a regular basis.

After the COVID-19 outbreak, millions of garment workers in Bangladesh were forced to work during the lockdown, putting them at a greater risk of infection. Activists complain that in the absence of public transport during the lockdowns, workers were forced to spend a major portion of their income on transportation, leaving them with meager resources for household expenses.

This June, the Dhaka-based South Asian Network on Economic Modeling and Microfinance Opportunities compiled a report on the information provided to workers about the essential requirement of immunization against COVID-19. As per the report, only 2% of garment workers have been immunized across the country.