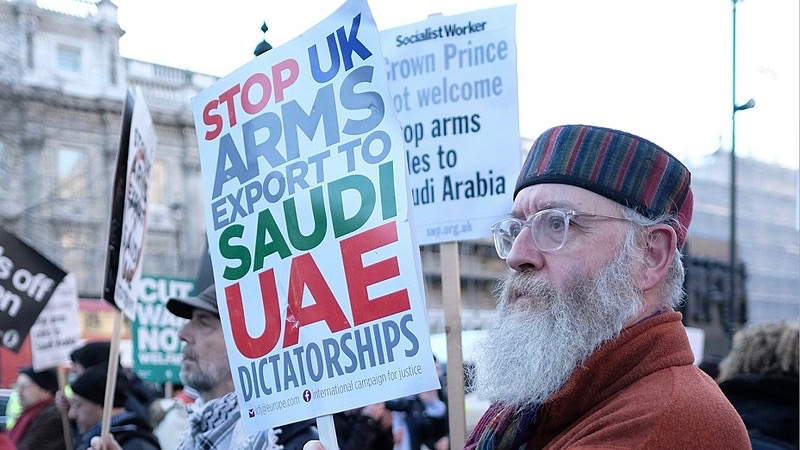 According to a report in The Guardian, the UK government has sold weapons to dozens of countries in the last decade despite knowing their poor records on human and political rights, and against repeated concerns raised by civil society groups across the globe.

According to the report, between 2011-2020, the UK government licensed to sell weapons worth around 17 billion pounds sterling (around USD 23 billion) to 39 countries out of a list of 53 countries with poor records on human rights, prepared by Freedom House, a US-funded human rights group.

Similar findings were reported by the UK-based Campaign Against Arms Trade (CAAT). According to CAAT, in the same period, the UK sold weapons worth 11.8 billion pounds (USD 16.41 billion) to 21 out of the 30 countries on its own list of repressive regimes.

CAAT also claimed that nine countries selected by the UK’s department of international trade as “core market” for arms export have the worst record on human rights. This list includes countries such as Saudi Arabia, which has been involved in a war in Yemen for the last six years, Egypt and Thailand, among others.

In April this year, CAAT filed a case in the country’s high court asking for a judicial review of the decision taken by international trade secretary Liz Truss to resume arms sales to Saudi Arabia in July 2020. The UK has sold weapons worth 1.4 billion pounds (USD 1.9 billion) to Saudi Arabia since then.

CAAT has alleged that British weapons sold to Saudi Arabia have been used in committing war crimes in Yemen. An official review of the decision accepted that there were “isolated incidents” of airstrikes in Yemen which breached international humanitarian laws.

According to the UK’s own laws, arms export to a country should not be licensed if it is suspected of using the weapons to violate international humanitarian law. Successive British governments have failed to follow the law, leading to various litigation in the courts by anti-war groups such as CAAT.

The UK supplies more than half of the aircraft used by Saudi Arabia for bombings in Yemen. Saudi Arabia has often been accused by different sources of deliberately targeting civilian areas in its airstrikes in Yemen, leading to the death of over 8,759 civilians.