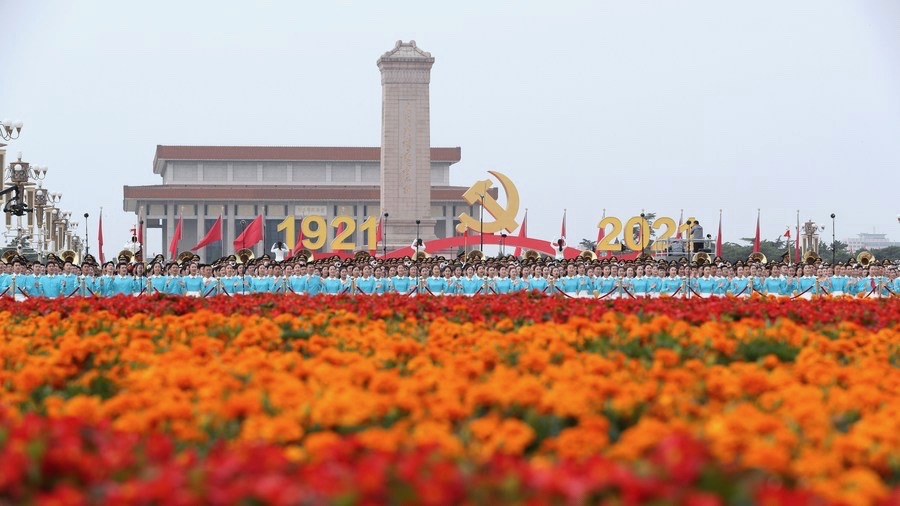 Celebrations in Beijing for the centenary of the Communist Party of China. Photo: Xinhua

On Thursday, July 1, celebrations were held across China to mark 100 years of the formation of the ruling Communist Party of China (CPC). At the main event in Beijing’s Tiananmen square, president Xi Jinping addressed the nation and opened a grand event as the culmination of the year-long celebrations. In his speech, president Jinping, also the general secretary of the CPC, declared that the party has achieved its first centenary goal of making China a moderately prosperous society.

In the year leading up to the anniversary, programs were organized across the country overcoming difficulties posed by COVID-19 related restrictions. According to Global Times, the celebrations saw massive popular participation as year-on-year tourism to the “Red Scenic Spots” in the country recorded a significant jump. Red Scenic Spots are major sites related to the history of the communist party in the country, symbolizing its modest beginning and long revolutionary struggles.

Marking the occasion, the country’s state council information center issued a white paper on China’s Political Party System: Cooperation and Consultation, which says that China’s party system is a unique combination of Marxist theory and the country’s reality, and is able to “realize the universality of interest representation and guarantee the effectiveness of national grievance,” Global Times reported.

On June 29, President Jinping awarded the July 1 medal, the party’s highest honor, to 29 model CPC members for their outstanding contributions to the party and the people. The recipients of the award, some posthumously, include a Red army veteran, volunteers serving the people for decades, a Uyghur village official, and several other common working-class members of the party. Speaking on the occasion, Jinping said that in the last 100 years, the party “has written a splendid chapter in the history of Chinese nation’s development and that of humanity’s progress.” In the presence of all members of the standing committee of the party including vice-president Wang Qishan, he praised the generations of CPC members who have worked hard and made selfless contributions in pursuit of national independence and liberation of the people and helped in making China a prosperous and strong country, Xinhua reported.

A huge jump in membership

Inspired by the ideas of the great October revolution in Russia and the works of Karl Marx, the CPC led a war against the country’s feudal rulers with the help of the peasantry for more than two decades under the leadership of Mao Zedong. Following the establishment of the People’s Republic in 1949, the party demolished the old feudal political system and created a new system based on one party rule with centralized planning and the objective of building a socialist society in China.

The party spent the first two decades in power in building a strong egalitarian society along with consolidation of the Chinese territories lost during the decades of colonial occupation. After overcoming structural economic challenges and ending the recurrent famines and internal contests over leadership, in 1978, the party under the leadership of Deng Xiaoping adopted a new approach broadly referred to as “socialism with Chinese characteristic” with greater opening of the economy and encouragement to private investment under a centralized planning system, which has been retained. This helped the Chinese economy to grow faster than most other economies in the world. The party used the surplus to strengthen the rural infrastructure and eradicate extreme poverty and hunger.

In the hundred years since its formation and 72-year rule in the country, the CPC has achieved tremendous transformation in the country’s economy and social structure and for its 1.4 billion people. Once a poor and majorly agricultural economy faced with regular famines, China is today the world’s largest manufacturer and second largest economy with almost zero hunger. The economic achievements has been shared with all in order to improve the living conditions for everyone.

The party has actively participated in the government’s attempts to eradicate extreme poverty in the country. As per records, since 2012, it has sent over three million of its members to remote areas to help in the implementation of government policies. Earlier this year, China declared the end of absolute poverty in the country. China was able to lift more than 770 million people out of poverty since 1979, which contributes to over 70% of the total global number of poor lifted out of poverty in the same period.

The party has also mobilized over 3.3 million of its members for the fight against COVID-19. China’s robust public health infrastructure has helped it beat the global trend and recover much faster from the economic recession caused by the pandemic. China became the sole major economy to record a positive growth rate last year.

In the last seven decades, China has also emerged as a technological superpower with innovations in 5G technology, modern transportation systems linking all corners of the country, as well as missions to Mars. This year, it became part of the small group of countries in the world with a space presence.

China is today an over USD 15 trillion economy, with a growth rate above any other major economy in the world and a modest living standard for most of its people. Speaking from Tiananmen Square, president Jinping asserted that China is “now marching in confident strides toward the second centenary goal of building a great modern socialist country in all respects.”