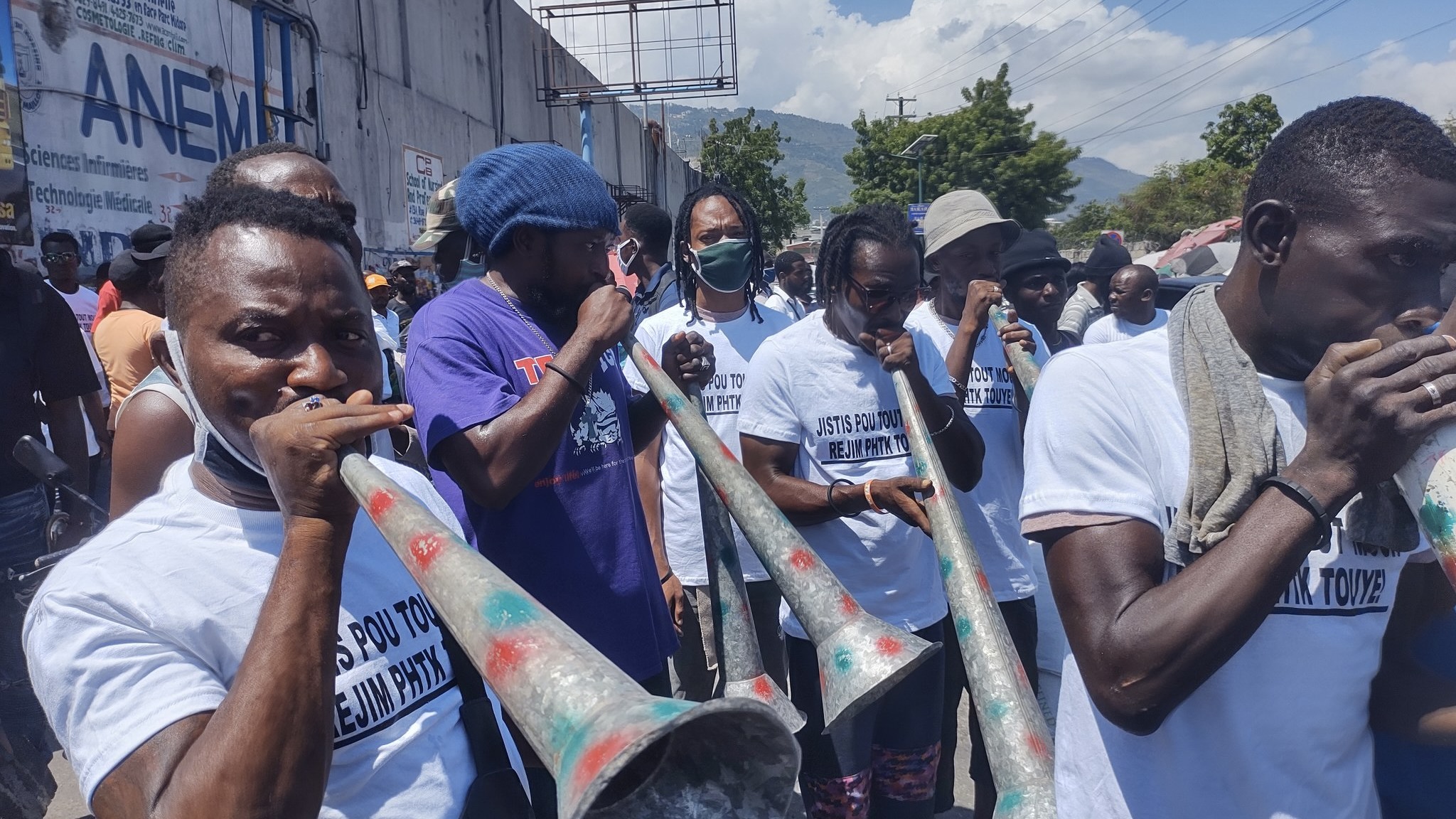 On July 28, hundreds of Haitians took to the streets of the capital Port-au-Prince demanding an end to international interference in the country’s internal affairs and respect for their self-determination and sovereignty. Photo: Lautaro Rivara/Twitter

On July 28, hundreds of Haitians took to the streets of the capital Port-au-Prince demanding an end to international interference in the country’s internal affairs and respect for their self-determination and sovereignty. The protesters marched from the constitution square in the Champ de Mars public square to the US embassy to express their rejection of the interim government’s another request to the US for military assistance to help stabilize the country and the situation of violence, which has aggravated in the aftermath of de-facto president Jovenel Moïse’s assassination on July 7.

The demonstrators also marched against the massacres and high levels of insecurity in the country. They demanded justice for the victims of the massacre in Delmas on June 29. In the brutal incident, 20 were shot dead, including renowned journalist Diego Charles and feminist activist Marie Antoinette Duclair, who were critics of the government and the current situation of the country.

A month has passed since the massacre, but the authorities have not yet provided information on the investigation. In the beginning, the police blamed the dissident faction, Fantom 509, for the shooting. However, the National Network in Defense of Human Rights assured that some witnesses identified the members of the G-9 gangs, who allegedly have links with the government.

In Montreal, Canada, a group of activists held a sit-in outside the Haitian Consulate in solidarity with the people of Haiti as well as to demand an end to the US interference and its support for the de-facto government of the Haitian Tèt Kale Party (PHTK). The new interim president, Ariel Henry, has also called to hold legislative and presidential elections and a constitutional referendum on September 26, 2021, despite the widespread popular rejection. The US has expressed its support for these unconstitutional plans.

The call for the protest was given by various civil society organizations, social movements, trade unions and opposition political parties to commemorate the 106th anniversary of the invasion of Haiti by the US and to say no to the US imperialism in Haiti.

On July 28, 1915, the day following the assassination of the then Haitian president Jean Vilbrun Guillaume Sam, the US Marines occupied Haiti and ruled the country until August 1, 1934. During the period, the US imposed systems that served its imperialist interests as well as of the economically dominant classes in Haiti. The occupation transformed Haiti into a neo-colony of the US. Since then, in order to survive and continue to control Haiti politically and financially, the US and the Haitian oligarchy have often resorted to fraudulent elections, coup d’états, invasions, and international occupations disguised as humanitarian aid.

Following Moïse’s murder, national and international civil society organizations warned that the crime could be used as a pretext to increase foreign interference and further deepen the socio-political crisis in Haiti.

Up until now, the US has assured that it is not considering sending troops to Haiti, but it has already sent FBI agents to help in the investigation into the assassination.

So far, the police have arrested 27 suspects, which includes 18 Colombian mercenaries, three Haitian police officers and 6 civilians, some of whom have dual citizenship with the US.

Jean Laguel Civil, the head of Moïse’s security, was the most recently arrested individual in the case. He was arrested on July 26 and has been charged with the crimes of murder, attempted murder, and armed robbery.

On July 27, Judges Clément Noël and Carl Henri Destin, justices of peace investigating Moïse’s assassination denounced that they have received death threats on calls from strangers, who have also asked them to change the facts in their reports. Earlier, in mid-July, the Haitian National Association of Registrars (Anagh) reported that two secretaries, Marcelin Valentin and Waky Philostene, who assisted the justices of peace, were threatened.

While the investigation continues, Haitian organizations are working to build a transition to rebuild democracy and institutions.

On July 31, in the neighboring country, the Dominican Republic, a group of international organizations organized two simultaneous caravans of solidarity and brotherhood with the Haitian people and their fight for a sovereign solution to the socio-political and structural crisis that their country is experiencing. The caravans was also organized against the apartheid wall that the Dominican government is building on the border with Haiti due to an increase in migration flow.