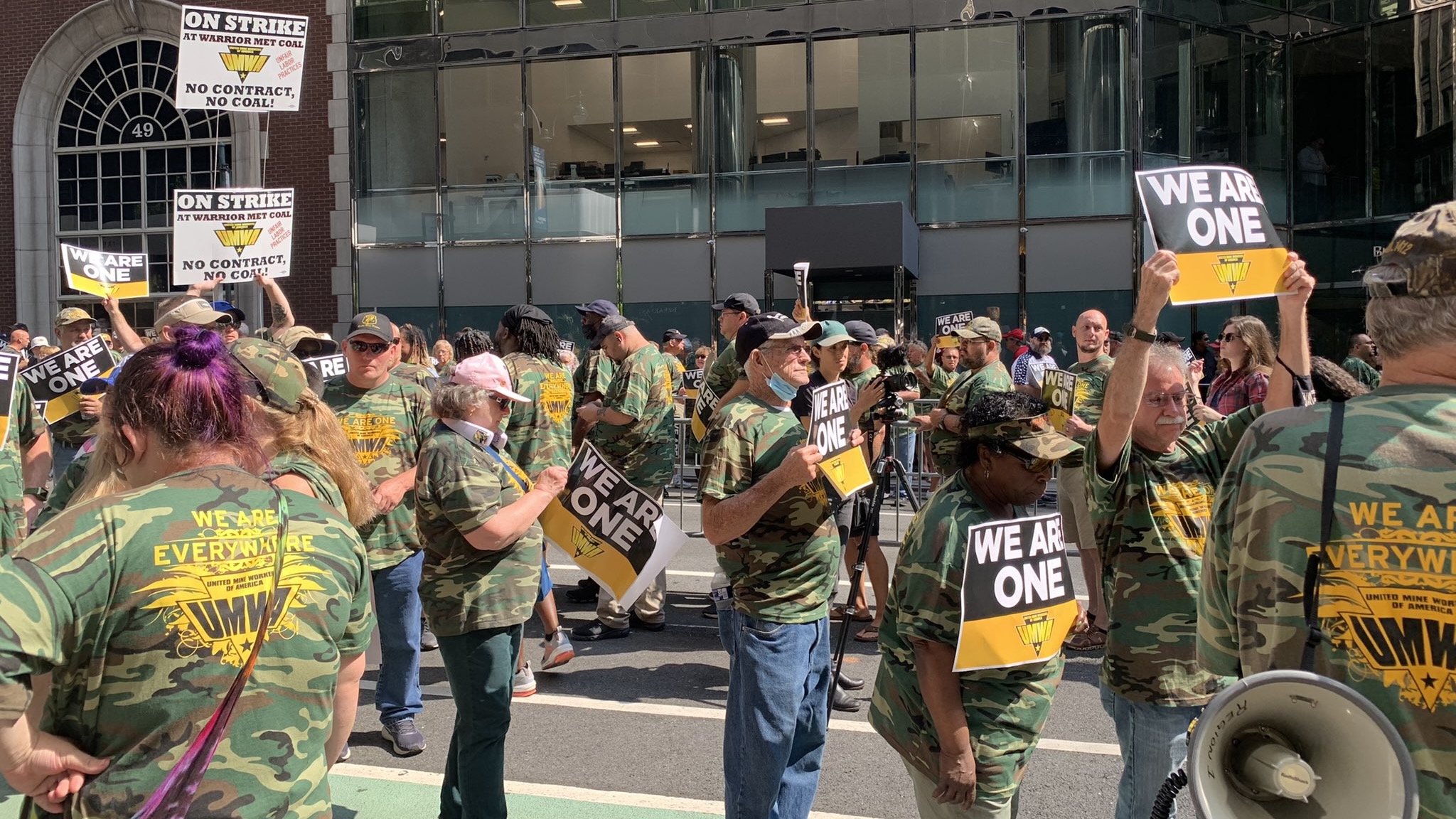 Protest outside the Blackrock headquarters in New York City, by striking miners from Warrior Met mine in Alabama and allies, on July 29. (Photo: NY Labor Council)

As the miners strike at the Warrior Met coal mine in the US state of Alabama reaches four months, miners from across the United States held a solidarity protest in New York City. Around 120 miners, along with hundreds of allies, rallied outside the headquarters of an asset management giant, BlackRock, on Wednesday, July 29.

Miners, organized by the United Mine Workers of America (UMWA), came from different states including Alabama, Kentucky, Ohio and West Virginia to join the protest. They picketed BlackRock which is one of the largest shareholders of Warrior Met, and was joined by delegates and representatives from other workers’ groups like the AFL-CIO American Federation of Labor and Congress of Industrial Organizations, Communications Workers of America, and the Retail, Wholesale and Department Store Union.

BlackRock, which is not only the world’s largest asset manager, but also holds nearly 7.5 million or around 14.5% of the company’s outstanding stocks in Warrior Met. UMWA has argued that BlackRock allowed Warrior Met to exploit miners and stall contract negotiations with the union.

An estimated 500 striking Warrior Met miners and supporters are rallying at the NYC headquarters of Blackrock, the company's biggest investor. 1,000 miners have been on strike since April 1 for better pay and benefits.

“We’re in New York City because we are simply following the money, and demanding that those who created the wealth, the miners, get their fair share of it,” said UMWA president Cecil Roberts at the rally.

Workers have been on strike since April earlier this year, after a strike vote was endorsed by a vote division 1006-45 votes among the nearly 1,100 members. Workers have argued that they made sacrifices in the previous contract negotiations in 2016, when the company declared bankruptcy. Workers tolerated wage cuts to keep the company afloat.

Despite significant profits and revenue made at the workers’ expense, the company has been reluctant to accept wage hikes and return of other benefits for the workers. The UMWA had previously stated that workers lost an average of USD 6 per hour in 2016, apart from loss of major benefits and higher cost of healthcare insurance.

In the latest contract offer voted down by 91% of the workers, the company offered a measly rise of USD 1.5 per hour over next five years Workers have also complained of longer working hours, stricter attendance rules, changes in overtime pay and increasing casualization at the company, as the company hires outsourced labor to replace striking workers.

The union has also alleged that the company has locked out the strikers and frozen non-wage benefits, including healthcare coverage for workers and their families in a bid to pressure them into submission. During Thursday’s protest, union members demanded that Warrior Met resume negotiations in good faith and pay workers what they rightfully deserve.

More than one thousand @mineworkers are taking their strike from Alabama to NYC today and picketing in front of the offices of BlackRock — the largest shareholder in Warrior Met Coal. They’re joined by union allies from across the country, including @SusanSarandon. pic.twitter.com/TJh4AwQxp6

“We’re not asking for much here,” said Carl White, president of the UMWA Local 2397 in Brookwood that leads the strike. “It’s time to come to the table and give us a fair and decent contract.”

“We don’t want no more than what’s owed to us,” said Chris Brubaker, a UMWA member and worker at Warrior Met mine in Brookwood. “We go underground in conditions that at any moment can get you killed.”

Workers were seen carrying placards that read “we are one” and chanting slogans “No contract, no coal! Warrior Met Coal ain’t got no soul!” indicating that they plan to continue the strike until the company gives them a fair offer.

Acclaimed actress and progressive public figure, Susan Sarandon, also participated in the protest and condemned BlackRock for the anti-worker policies its companies are enacting, calling it a “horrible smear on the vision of the United States.”

The ongoing strike in Brookwood which will finish four months on August 1, is the longest strike organized by the UMWA in decades. 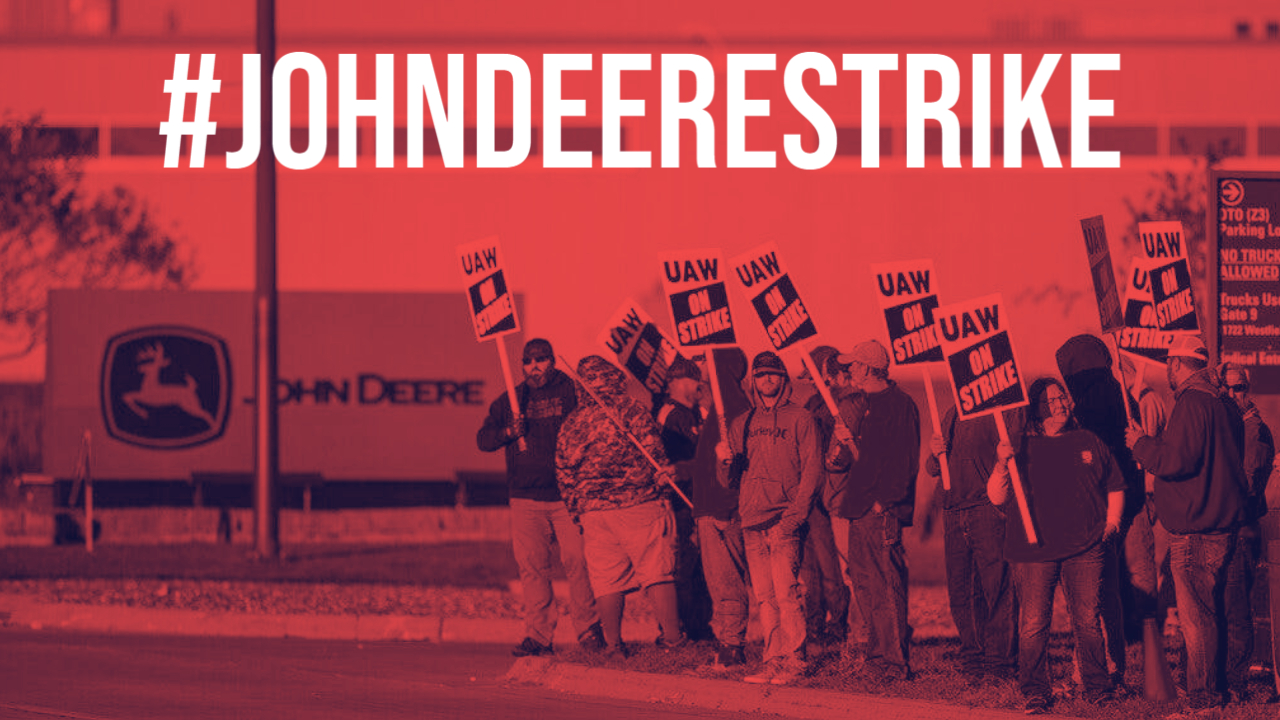 Over 10,000 workers at John Deere down tools