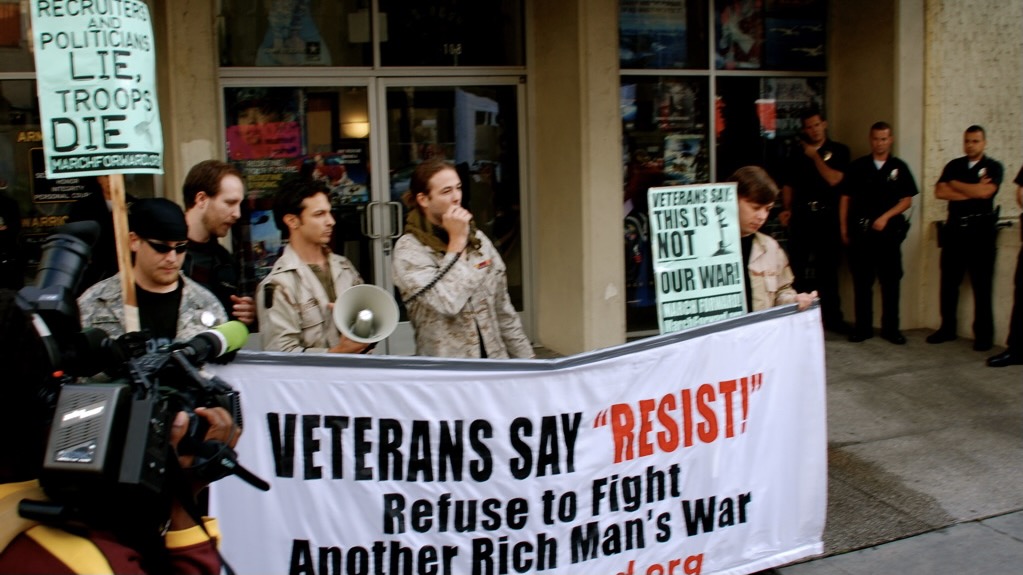 Veterans have been on the front lines of resistance to the US wars in Afghanistan and Iraq. Photo: ANSWER Coalition

Michael Davis was 11 years old when the war in Afghanistan started, 19 years old when he enlisted in the US military and 21 years old when he arrived in Afghanistan’s Wardak province as part of a combat engineering unit tasked with finding improvised explosive devices (IEDs). “I came from a really small town in central Washington from a working-class background. I had nowhere to go; [I] messed around in school too much and didn’t have a college future,” Davis explained. “I didn’t want to be stuck working on [a] farm. I joined [the military] in 2009, right in the middle of the housing collapse.”

Davis’ experience is typical of what critics of US foreign policy refer to as the “economic draft.” He explained, “I have a lot of friends who are broken in the sense that they drink too much or their bodies [have been left broken from excruciating work]. Sometimes on the farm you work 15 hours a day, and there’s no overtime… Opiates were definitely a part of [what people turned to] in Franklin County where I grew up. You work hard and go home and you hurt, so you drink or do whatever.” Davis recalled, “My dad was in the military before me, and to his credit, my dad told me, ‘don’t do it’—and he’s a super conservative individual. But my thought process was, ‘my life isn’t going anywhere, and the military is a way out.’”

Military recruiters are well aware of this dilemma facing so many young people. “I was sent to a troubled youth school when I was 17,” said Davis. “It was super right-wing and religious. [In school,] I initially talked to a Marine recruiter who [spoke with]… people who are on the ‘wrong track.’”

Although it would be several years before Davis began to form anti-war political convictions, he immediately began to regret his decision to join the Army. “Being 18 and going through basic training and seeing all the people around you who are just beaten down and broken down, you start to second-guess it. When you’re 21, you go to Afghanistan, you get sent to war, and you’re like, ‘what was I thinking?’ and that’s only [over] a three-year [time period].”

Arriving in the ‘Forever War’

The job of Davis and his combat engineering unit teammates was to “go out before other units, even the infantry, and we would run the same routes day after day, week after week. We [would] go out there [and] walk around in the mountains [and] through these villages. It was mostly a show of force and to ‘go find IEDs.’” Davis arrived in the quieter winter months, but said that “When springtime came around, it was like a kick in the teeth. I lost some really good friends within three months of being there.”

Animosity between the mostly working-class enlisted soldiers and their officers who came from wealthier backgrounds was palpable. The officers, Davis recalled, “had the air of, ‘we know better than you.’ There was only one non-enlisted person who didn’t have a college degree… Anyone above a lieutenant or a captain made a lot of shitty decisions. It’s what got a lot of us [enlisted soldiers] hurt or injured.”

Danny Sjursen, who was a captain commanding the US Army troops alongside units of the Afghan army and police around the same time that Davis was deployed to the war, noticed a similar phenomenon. Sjursen said, “I had 100 soldiers, give or take; 95 of them were enlisted. Maybe five had college degrees. They were slightly more rural and Southern and from the Mountain West and [the] Rust Belt. They didn’t speak the same language as the officers, especially as they went higher up.”

Sjursen, now the director of the Eisenhower Media Network, graduated from the elite United States Military Academy at West Point, but against the advice of his instructors, he developed close relationships with the enlisted soldiers under his command. “They [the enlisted soldiers] never saw a purpose to [the war]… they literally felt like their biggest enemy wasn’t the Taliban, but it was ambitious colonels and generals.” Sjursen further noted, “They are not lefty guys—lots are basically Trump supporters. But they would laugh at someone if they said, ‘you guys did a great job over there.’”

“My outpost was attacked all 365 days” during a year-long deployment, Sjursen explained. “One of the things that was most frustrating was sensing that there wasn’t going to be any meaningful change based on the year we spent there,” said Sjursen. “Three of my soldiers were killed and 32 others wounded in some way. That’s 35 percent casualties, that’s high… and who knows how many we killed?”

But for more senior officers, the obvious futility of the conflict took a back seat to individual career ambitions. Sjursen remembered that many of the top-ranking commanders he encountered, “spoke in platitudes. They were taught to do this. I didn’t get the sense that they were gung-ho for the mission. These guys are professionals.” The war, in a sense, was a resume-building exercise for ambitious officers. “If you had a combat command, that’s a very good thing for your career. And it helped if it was a very aggressive one.”

Meanwhile, soldiers like Davis were being hurt or killed. “I was only there six months before I myself got hit,” said Davis. “A road we regularly [went] through had gotten blown up, so we had to clear the debris. A bomb blew up, and I broke both my feet and ankles and was in a wheelchair for six months.”

While recovering at Walter Reed National Military Medical Center, Davis turned against the war. “At Walter Reed, they give you some support, but it feels like a show. You’re around a lot of people who are missing arms and legs, and at that point you just kind of ask ‘why?’” During his recovery, he saw a report on BBC showing how an area of the country he had been deployed to was ceded to the Taliban. “Why the hell are we here in the first place?” Davis recalls thinking in the hospital, questioning “a system that puts you up on a pedestal, and as soon as something changes, they just forget about you.”

Today Davis is an avowed anti-war and socialist organizer in his home state of Washington. When asked what he would say to a young person from his town who is considering joining the military like he did, Davis replied, “I would say don’t do it, of course. But how are you going to tell that to someone who doesn’t have another shot at anything else? So it’s really hard to say that.”

“It’s not ‘Be All You Can Be,’” Davis argued, referring to the Army’s favorite recruiting slogan. “It’s ‘watch people die for no reason.’”

Walter Smolarek is a Philadelphia-based journalist and activist, covering both political developments inside the United States as well as the international activities of US imperialism. Since becoming involved in the movement against the Iraq War as a high school student, he has also participated as an organizer in social movements ranging from Occupy Wall Street in 2011 to the 2014-2015 wave of the Black Lives Matter movement and ongoing mutual aid relief efforts in the face of the coronavirus pandemic. He is a contributor to BreakThrough News, currently serves as the editor of Liberation newspaper, and is the managing editor of LiberationNews.org. He is a Globetrotter/Peoples Dispatch fellow. 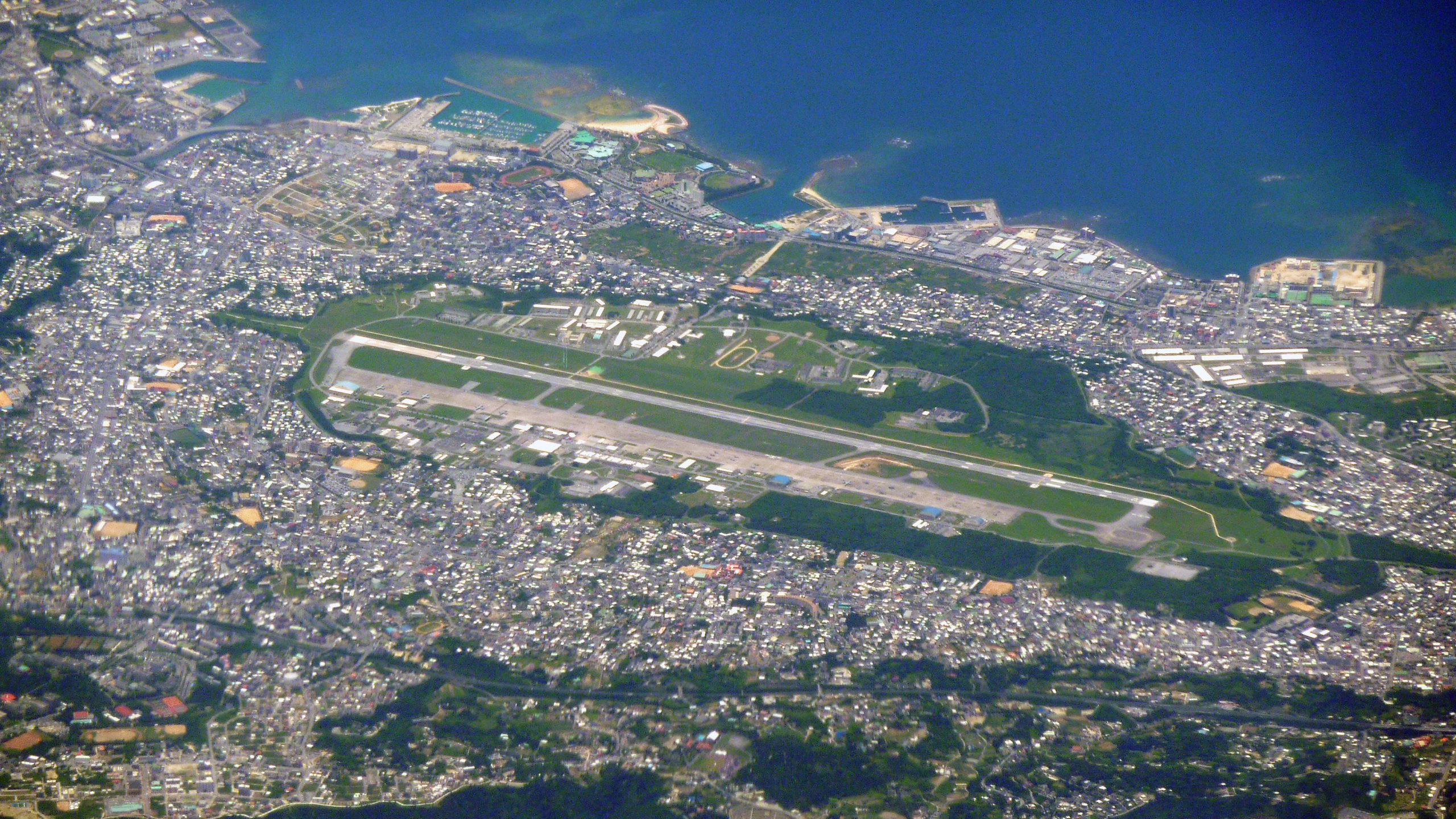 Iwakuni residents fight back against US military presence