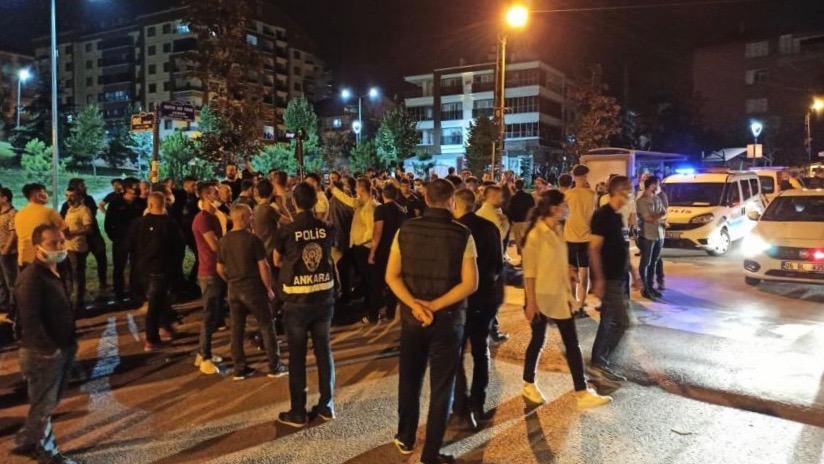 Several Syrian refugees living near Turkey’s capital Ankara were attacked by right-wing mobs on the early morning of Thursday, August 12 following news of the death of a Turkish teenager in a fight with a refugee.

A violent mob in Altindag, located on the outskirts of Ankara, attacked businesses and homes of the refugees. The mob took to burning and looting and threw stones at the refugees, injuring several Syrians including one boy.

Several people on TV spoke to demand the withdrawal of all foreign refugees from the country. Video footage showed hundreds of young people breaking a police cordon and breaking into shops and houses of the refugees in the late night of Wednesday and early Thursday.

The Turkish police have been blamed for ignoring the actions of the violent mob. It was only after hours of looting that they intervened and later claimed that dozens of rioters had been apprehended. The police also said that over half of those detained have previous criminal records.

There are an estimated 3.6 million Syrians living in Turkey since the war in the country broke out in 2011. Resentment against the Syrian refugees has grown in recent days, with thousands taking to social media to campaign against their presence in the country. The situation is fueled by right-wing parties in Turkey, including the ruling Justice and Development Party (AKP) and opposition Republican People’s Party (CHP). These conservative forces blame the refugees for the economic hardships in the country and accuse them of changing the local culture. CHP leader Kemal Kilicdaroglu had proclaimed last month that the presence of Syrian refugees poses a threat to national security. He also claimed that once in power, the CHP will ensure that no Syrian refugee remains in the country.

A result of systemic xenophobia

Several progressive and leftist personalities and parties condemned the violence against the Syrian refugees, including the People’s Democratic Party (HDP). Renowned author Elif Safak took to Twitter to condemn the attacks, saying that the “rhetoric of hatred and bigotry and systemic xenophobia targeted at refugees breed mob violence.”

This is very difficult to watch. Nationalist-racist-extremist groups in Turkey attacking the houses of Syrian refugees. Despicable, awful, utterly shameful. The rhetoric of hatred and bigotry and systemic xenophobia targeted at refugees breed mob violence. pic.twitter.com/i2SXChWWiK

Head of the Turkish Red Crescent, Dr. Kerem Kinik, urged the people to calm down after photos and videos of wounded Syrian refugees went viral on social media. He was quoted by the Middle East Eye as saying that attacks on people’s houses in the middle of the night is not Turkey’s culture and that “many refugees reached out and told us that they were scared for their children’s lives.”

Talking to the media, HDP spokesperson Ebru Gunay warned of the growing racism in Turkey and the role of certain parties in fueling it. She further said that “what happened in Altindag is a part of the planned chaos and we urge our citizens not to be a part of this plan,” Bianet reported.

Under right-wing pressure, Turkey has tried to push the Syrian refugees to go back. It has also used its control over the northern parts of Syria to create a buffer zone to relocate millions of these refugees despite opposition.