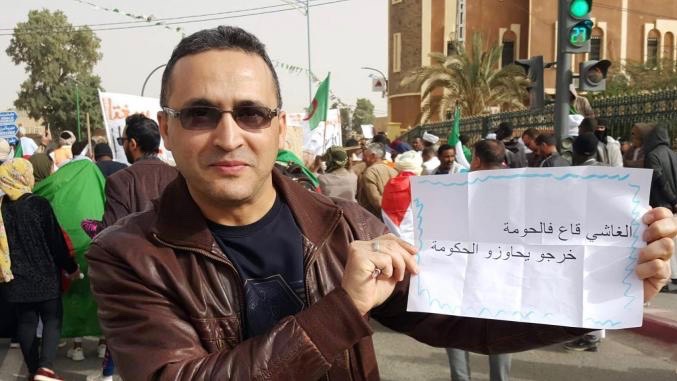 On Thursday, August 12, Algerian journalist Rabah Kareche was sentenced to a jail term of one year of which four months were suspended. This followed a trial which press freedom and human rights groups slammed as the latest attack on journalists in the country. According to the Liberte daily where Kareche works, a court in the southern Algerian town of Tamanrasset convicted him on charges including “spreading false news harmful to the public order,” “using media to undermine national security and unity,” and “using an electronic account to disseminate information prone to causing segregation and hatred in society.” Kareche was also fined DA (Algerian Dinar) 20,000. He now has to serve four more months in prison after already being in pre-trial detention since his arrest on April 19.

According to news reports, Kareche was arrested after he published articles covering protests by the historically marginalized Berber Tuareg tribal community in southern Algeria. The Tuareg community had been protesting against the expropriation of their ancestral lands by government authorities and the theft of natural resources such as oil and mineral deposits found in the area. His arrest soon after the publication of the three articles was widely denounced by fellow journalists in Algeria and internationally. Rights groups demanded his immediate and unconditional release and called upon the Algerian government to stop the persecution of journalists through misuse of the judiciary and the country’s newly modified penal code.

Reacting to his sentencing, Amnesty International in a statement said that it is “another blow to the freedom of the press in Algeria” and “no journalist should be jailed just for doing their job. Rabah Kareche should be released immediately, and his unjust conviction and sentence should be squashed.”

Sherif Mansour, Middle East and North Africa Program Coordinator for the Committee to Protect Journalists (CPJ), said that “Algerian journalist Rabah Karèche’s only crime was doing his job as a reporter; authorities should not force him to spend even one day in prison for his work. Authorities must release Karèche immediately and unconditionally, and ensure that he, and all journalists in Algeria, can cover the news without fear of imprisonment.”

International press freedoms watchdog Reporters Without Borders (RSF) also denounced the “unjustified sentence” and urged the Algerian authorities to “respect the freedom of information guaranteed by the Constitution and respect the press code.”

Press freedom groups have repeatedly raised concerns about the steady decline in press freedoms and freedom of speech and expression in Algeria and the increasingly restrictive and undemocratic curbs being placed on the press. Several journalists and critics have been arrested on politically motivated charges. The annual press freedom rankings published by RSF ranked Algeria at 146 out of 180 countries, down 27 places since 2015.