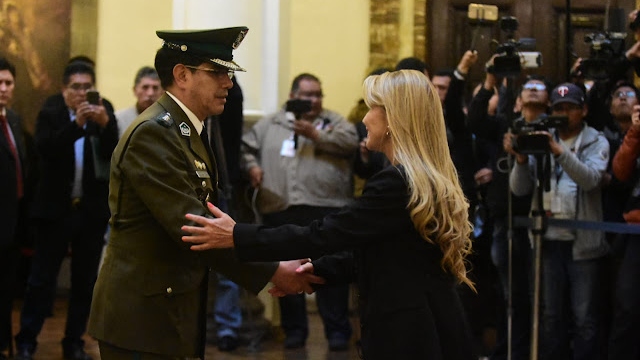 A Bolivian criminal investigating judge of the city of El Alto, on September 8, ordered six months of preventive detention for former police commander, Rodolfo Montero. The order came a day after he was arrested by the police for his alleged participation in the massacre perpetrated in the Senkata town of El Alto city on November 19, 2019.

Montero was sworn in as general commander of the Bolivian Police by the de-facto president Jeanine Áñez five days before the massacre, on November 14, 2019. For this reason, he is identified as one of the main responsible for the Senkata massacre.

Following the civic-military coup against the democratically elected government of socialist President Evo Morales on November 10, 2019, and his forced resignation and departure from the country on November 12, 2019, far-right senator Áñez illegally seized power and unleashed unprecedented levels of repression against those who took to the streets in rejection of the coup. She authorized the security forces to use extreme force to suppress social protests.

On November 19, the coup-installed regime sent in helicopters, tanks and heavily armed police officers and soldiers to the Senkata gas plant, which the Indigenous residents of El Alto had blockaded as a measure of protest. The forces tear-gassed the protesters and shot firearms into the crowd, killing at least 10 protesters and injuring a hundred.

In addition to the Senkata massacre, Montero is also being investigated for the massacre in Sacaba city in the Cochabamba department on November 15, 2019. It was the first massacre during Áñez’s de-facto rule, in which Bolivian security forces brutally repressed a peaceful anti-coup march with tear gas and live bullets, killing eleven and gravely injuring more than a hundred protesters.

The Bolivian Justice has detained 13 former military commanders, two former police officers and three civilians, including Áñez, in relation to the Sacaba and Senkata massacres.

Last month, on August 17, the Interdisciplinary Group of Independent Experts (GIEI) of the Inter-American Commission on Human Rights (IACHR) presented its report on the acts of violence and human rights violations committed during the 2019 coup d’etat in Bolivia. The report confirmed that Áñez’s regime was responsible for massacres, torture, persecution, illegal detention and summary executions of those who resisted the coup.

Last week, on September 3, the relatives of the victims of the massacres held a march in La Paz to demand that the Prosecutor’s Office and the Judiciary accelerate the process of justice based on the results of the GIEI’s investigations. They also rejected the attempts by right-wing opposition leaders to free Áñez from prison.

Victims of Bolivia's Senkata & Sacaba massacres are marching together, now in La Paz, to demand justice and to reject attempts to free the 'murderer' Jeanine Añez. pic.twitter.com/mcUMhxLY21